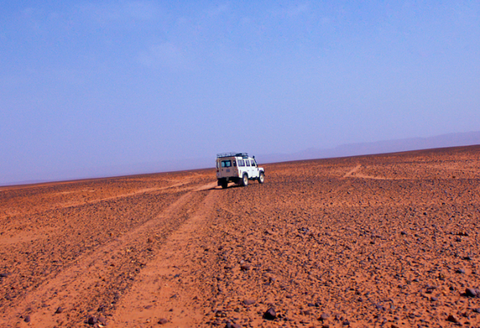 I am a serial over-packer. Nervous that I won't have everything I need miles from home, I think of every possible emergency and what item would be needed in that scenario. It's that kind of panic that once led me to pack a jumbo rolling suitcase for a weeklong trip on a catamaran. Everyone else brought little duffle bags, and I couldn't even fit mine on the boat.

My first attempt to break this habit was a trip on the Via Francigena, the ancient pilgrimage from France to Rome. I could only bring what I could carry on my back while walking some eight to 18 miles a day, so I learned then that I could do with very little. Granted, I'd look like crap that whole time, but hey, Italy is really the place to stop caring about such things.

When my family and I geared up for a once-in-a-lifetime trip to Morocco, I tried to go light again. Now I knew I had it in me. I wasn't expecting my period, so I whittled down my toiletry bag to a simple four emergency tampons. I could always buy them there if I needed more, right?

Clearly, I had not done enough research about my destination.

My period started on the third morning of the trip. We were up at dawn for a 10-hour drive from Marrakech to a Sahara border town—there aren't exactly tons of 24-hour CVS pharmacies in Morocco, so I was stuck setting out at 5am with my minor back-up stash. All four of them.

We were hours outside Marrakech when I realized I was in trouble. We took a break at a tourist rest stop, which featured a tiny convenience store of sorts. It offered all of the exotically mundane junk foods—ketchup Pringles?—but no tampons. Finally, I spotted "dual-action" maxi pads stacked near the ceiling with the baby diapers. I used a can of those ketchup chips to knock them down into my hands, and felt a small flush of relief. The back-up for my back-up. Of course we'd find tampons elsewhere. Of course.

Our rickety car climbed up the ancient, bumpy roads of the High Atlas Mountains. I'm never going to see a store again, I realized. I am going to ruin all of my clothes, I realized. Here I was having the adventure of my dreams, and this ridiculous occurrence was ruining it. That, and the white sheets at our B&B, which I anxiously spit and rubbed, spit and rubbed to remove the stains before everyone woke up.

Stopping in on a kasbah on the trip, I spotted two Berber women in colorful scarves. My salvation! I approached them and attempted some sixth-grade French.

"Je voudrais les tampones," I said, having not a clue if I was speaking properly, or if these women even spoke a word of French in the first place. They blinked and looked at me.

I pointed at my crotch. Then said "rouge," along with some horrifying hand gestures to indicate dripping.

I held up one of my festively wrapped, lime green Kotex tampons and pointed demonstratively. Still they were mystified. It was the most embarrassing and necessary game of charades I'd ever play.

"Sangue?" I tried. Evidently the universal Latin root word wasn't as universal as I could have hoped. Then I pointed at my crotch. Then said "rouge," along with some horrifying hand gestures to indicate dripping. This last step which finally elicited knowing nods from the women, who chattered amongst themselves before telling me the object of my quest would be at a shop in M'Hamid, the next "big" town.  Aha! A shop in M'Hamid would yield the treasure I sought. The Holy Grail. One kind woman offered to do my bidding and retrieve them for me, but I declined. I felt terrible that she'd be trekking on foot in the desert heat because of my period. Women suffer enough, you know?

We happened upon M'Hamid, and I happened upon... a packet of maxi pads. One brand, one size, one absorbency. I admitted defeat and used the hygiene products I had abolished in eighth grade.

As the trip went on, and my period finally began to subside, the maxi pads found another, less predictable use. My family and I, men and women alike, wore them in their shorts while riding camels, where they protected our crotches from all that prolonged bumping. So there.