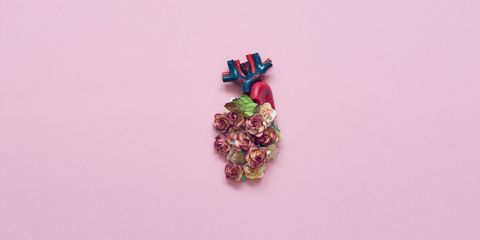 I realized that my mother was unlike my classmates' mothers the first time another kid asked if she was my nanny.

From the on, I became a little spy in my own home—seeing my mother as other people did. I suddenly heard her accent. I noticed that the food she packed for me wasn't the same food my classmates ate. I became aware that in the summertime, her skin got much darker than mine.

"I almost cried when she snapped to 'just pick something.' Stumped by the short list, I chose 'white.'"

But it wasn't until taking a standardized test in sixth grade that I understood I was biracial—at least by the American definition. The personal information section demanded that we identify our race. It was the first time I had ever explicitly been asked the question. I told my teacher that I didn't know how to answer the question—I was more than the one box specified—and almost cried when she snapped to "just pick something." Stumped by the short list, I chose "white."

I remember feeling miserable the rest of the day.

The author (center) and her family
Courtesy of Christine Stoddard

Up until I started school, I only knew that my mother was from a tiny country called El Salvador, but it was far away—and I had never visited. The only women in my day-to-day life who were from such faraway lands were nannies to my friends' families. They, like my mother, spoke languages other than English. They were also busy raising American kids—just not necessarily their own.

"I am not a Latina mestiza and I am not a white American. I am both, all at once, always."

A lot of what I gleaned about my status as a biracial child came as a result of being bullied. Classmates mocked how my mother spoke and called me ugly. I couldn't eat rice and beans in peace. Even the other parents looked genuinely confused when they saw my family together.

My sisters and I all have different hair textures and none of us have quite the same skin tone. I'm a light olive complexion with big, voluptuous curls. The youngest has fine hair and a pale, freckled complexion. The middle one is somewhere in between. I grew accustomed to hearing that none of us "look related" and utter surprise that my parents were my parents. Even though most of my classmates' parents were well-educated and had high-power jobs, they seemed to conveniently forget Biology 101's lessons on dominant and recessive genes.

The author
Courtesy of Christine Stoddard

Acceptance into Latino communities wasn't so easily won, either. My family befriended Latin families from other neighborhoods, but we didn't have the luxury of living down the street from them. Some Latinos genuinely didn't seem to know how to treat my white father—a tall, blue-eyed Anglo-American—with anything other than suspicion.

Belonging has been a lifelong battle. I am not a Latina mestiza and I am not a white American. I am both, all at once, always. I see the world from both perspectives, politically, socially, and culturally.

The problem is that, even in today's world, so many people don't allow me to be both. They demand that I choose. If I don't, the answer will be chosen for me. I'm assigned a race and all of the cultural baggage that comes with it.

If I deviate from their stereotypes and preconceived notions, people act like I've betrayed them. I am not their token and that bothers them. They cannot believe that I'm not "more Latina" or "more white."

Though I am tired, I am proud. I have a blended heritage that has shaped my experiences. And so I will continue to be myself—a happy, unique individual who subverts expectations and lives according to her own will. As a Latina American, after all, being strong and resilient is the most authentic thing I can do.