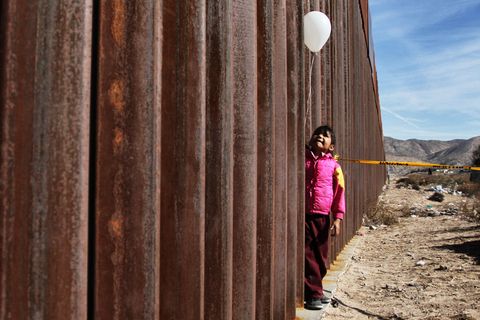 The reports have been chilling. A woman sobbed as she described how federal authorities took her child away from her while she was breastfeeding. A 10-year-old girl with Down Syndrome was separated from her mother. Babies and toddlers were ripped away from their families and then held in what, at best, have been described as “play rooms of crying preschool-age children in crisis.”

We are a nation in crisis. For weeks now, Donald Trump, Department of Homeland Security Secretary Kristjen Nielsen, and others in the Trump administration have enforced an inhumane policy of separating families as they enter the U.S., including those who are fleeing violence and lawfully seeking asylum in America. Worse, we know that his administration is still separating children from their families—despite the executive order he signed.

"Trump’s new “solution” is to keep families together in jail."

Whatever your feelings about the parents, no child should ever be subjected to this abuse. I am lucky to be the mother of two incredible little girls. I can’t even begin to imagine being torn away from them or the pain and fear they would feel if they were ripped from my arms. As the daughter of an immigrant and also as someone whose family served in the U.S. Armed Forces during every period of conflict dating back to the American Revolution, I am disgusted by the level of cruelty Donald Trump and his administration have shown to people coming to America seeking refuge and a better life. These are not the American ideals I fought to defend for my 23 years in uniform.

Let’s be clear: though Trump hastily signed an executive order last week supposedly ending the inhumane policy of separating families, he only did so after receiving wave after wave of backlash from the American people. That is what ultimately matters to Trump: Ratings and media coverage, not the cries of thousands of terrified children and infants wondering if they’d ever see their parents again thanks to his and Secretary Nielsen’s needless and barbarous policy.

After traumatizing countless children, Trump’s new “solution” is to keep families together in jail. It is deeply disturbing that the president of the United States of America, the leader of the free world, believes children belong in jail cells.

And there is serious cause for concern that the Trump administration has no plan in place to reunite the families it has already ripped apart, despite a federal court ordering it to do so. The former head of U.S. Immigration and Customs Enforcement warned that some children may never be reunited with their parents again.

This is a moral failure on a scale that would have been unfathomable just a few years ago. The Trump administration has chosen to rip children and babies away from their parents and then hold them hostage. They are acting as if this is some political game to be won, but the reality is that they are playing with innocent children's lives.

"I will not let this abuse continue."

As a mother, and as an American, I will not let this abuse continue. It is completely antithetical to our nation’s core values to abuse innocent children and infants and ignore their literal cries for help.

Yesterday, I joined hundreds of Americans who understand and want to protect our nation’s ideals as they protested this inhumane policy on Capitol Hill. We must ensure this policy is never implemented again, and we must do everything in our power to ensure the children who have been torn apart from their families are reunited.

Related Stories
Easy Ways to Help Immigrant Kids Right Now
The Other Ways Trump Is Tearing Families Apart
This content is created and maintained by a third party, and imported onto this page to help users provide their email addresses. You may be able to find more information about this and similar content at piano.io
Advertisement - Continue Reading Below
More From Culture
Dyland Arnold Is a Breakout Star in 'You' Season 3
'Virgin River' Season 4: Everything We Know
Advertisement - Continue Reading Below
Madi Prewett Shares Her Favorite Self-Care Books
'Only Murders' Is Getting a Season 2
Every 'Squid Game' Hint You Missed Along the Way
Meet the Cast of Netflix's 'Squid Game'
Listen to the Best New Love Songs of 2021 (So Far)
Shalita Grant Is Hilarious in 'You'
'Squid Game' Season 2: Everything We Know
Breaking Down the 'You' Season 3 Finale