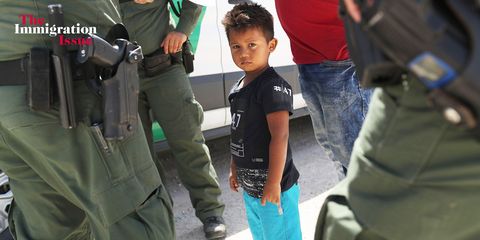 In the weeks since the Trump administration changed its zero-tolerance policy toward immigration—a policy that separates migrant children from their parents when coming over the the border—we've seen horrifying and heartbreaking sights, sounds, and stories coming from the detention centers where the children are being held. We’ve seen photos of the cages children are being kept in, heard audio of screaming kids begging to speak to their parents, and read witness accounts of overcrowding and lack of supplies.

If you feel like you can’t go another moment without doing something to help with the kids being separated by their families at the border, try doing one of these:

This takes only a few minutes, and every bit of pressure on elected representatives helps. There are currently several bills being pushed to fight the Trump administration’s zero-tolerance policy, the most widely-circulated being the Keep Families Together Act, introduced be California Senator Dianne Feinstein (D). It’s currently supported by all Senate Democrats, but if you’re represented by a Republican, make sure they know that as your constituent, you want them to represent you and stop the zero-tolerance policy that separates children from their families.

The ACLU has a script you can follow here, and they'll even route your calls to the correct representative.

So much of the burden that these immigrant children and their families will face is going to be financial, and every little bit you can donate helps. If you want to take a cue from Chrissy Teigen—whose fundraiser in “honor” of Trump’s birthday garnered over $1 million—you can donate to the ACLU here.

Other organizations making an impact on this crisis are:

The Refugee and Immigrant Center for Educational and Legal Services (RAICES)

You may have seen their viral Facebook fundraiser on your feed. This organization can help put up the bond money to get parents out of detention and reunited with their children and make sure every child in Texas’s immigration system has legal representation. They’ve so far made over $2 million. You can donate to them here.

This organization advocates for separated children and is trying to launch a new initiative specifically centered around children affected by the zero-tolerance policy. You can donate to them here.

This nonprofit seeks to protect children and families crossing the Californian border through to the United States. Its volunteer-only model provides immigration help, as well as rescue and water stations. Donate here.

A project of the Urban Justice Center, this organization helps prevent wrongful deportations and is currently looking for donations to provide legal aid, as well as volunteer attorneys and translators. Donate here.

Donate to ActBlue and your money will be sent to more than a dozen different organizations working to help children and families separated at the border. Donate here.

NIJC provides representation for immigrant parents and children who have been separated or are detained near the border and throughout the U.S., as well as advise federal defenders representing asylum-seekers. You can donate to them here.

This organization provides shelter to immigrants and refugees, largely in the Sonoran Desert. Donate here.

CARA (a joint project of the groups CLINIC, RAICES, AILA, and the American Immigration Council)

Four separate immigration nonprofits joined forces in 2014 to form CARA, a pro bono group that connects attorneys to immigrants being held in detention centers near the border. If you're a lawyer, you can volunteer to help out, and if not, you can donate here.

Kids In Need Of Defense (KIND)

This group aims to provide support for children that have crossed the border, whether they were separated from their parents before or after the journey. It provides legal help to children in need, and simultaneously advocates for countries to recognize immigrant children's rights. Donate here.

A global organization that fights for displaced women and children, the Women's Refugee Commission has turned its attention to the separation crisis at the border. Donate here.

You can also buy products like diapers to be sent directly to immigrant children through this registry at Target.

If you’re a lawyer, several organizations are looking for more people to represent children and families in immigration courts. ASAP is one such organization, and you can find out how to get involved here.

The Texas Civil Rights Project also put out a call for those with legal experience as well as those who can translate and help with the intake process:

One opportunity to help is to volunteer w/ @TXCivilRights - they are in need of Spanish, Mam, Q’eqchi’ or K’iche’ and have paralegal or legal assistant experience to help w/ their legal intake process in McAllen, TX - here is the volunteer form: https://t.co/7LzEgCSbmP

Go to a Protest

So much political change is affected by optics, and a big crowd protesting a policy is a clear sign it’s unpopular. If you can’t volunteer or donate, you can still show up to protest and be counted among those who find these policies cruel, immoral, and un-American.

The nonprofit Families Belong Together has been organizing vigils and protests around the country. To see what the one nearest you is, you can go to their website here.

It is completely understandable to feel helpless in this situation. The policy is almost unfathomably cruel and it can be hard to keep track of all the details. But there are some things you can do right now to help immigrant children and help shoulder the emotional and financial burdens their families face.