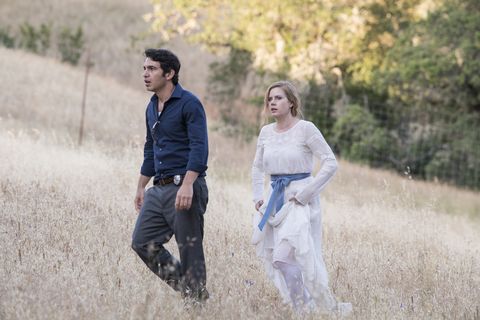 This is a recap for the fifth episode of Sharp Objects, which means there are SPOILERS ahead. If you haven’t seen the episode and don’t want to know what happened, come back once you’ve seen it. You've been warned. A recap of last week's episode can be found here.

This week, we got taken for quite the ride on Sharp Objects. You’ll recall that, in the last moments of the last episode, we were led to maybe-sort-of believe that Amma had been killed in the creepy shed in the woods. Of course, it’s hard to tell what’s real when it’s from Camille’s perspective, and “Ripe” was a particularly flashback-rich episode on a show that already relied heavily on them. But it was still a little jarring to see Amma, dressed in her Antebellum Calhoun Day garb, joking with her friends and roller skating around on the porch within seconds of the Sunday’s episode, “Closer.” It all makes the question of whether Camille is imagining the worst, or whether it’s a glimpse of the worst that is yet to come, even murkier.

Here are some of the biggest moments from Sharp Objects episode five, “Closer.”

Nice touch there, Sharp Objects. I have to say, after how utterly horror-filled the last two episodes were—what with the creepy revelations about the woods and the realization that Camille’s rehab roommate, Amelia, killed herself by drinking Drano—it was kind of a relief to see that Amma’s death last episode was, at least for now, a fake-out. This show is smart in the sense that, the more complicated Amma becomes, the more viewers want to root for her. She and Camille really are kindred spirits in a lot of ways, which means Amma is likely going to be inclined to get the hell out of Wind Gap.

How sad was that flashback about the photo shoot?

The ivory floors motif alongside the Confederate imagery is pretty heavy-handed, if I'm being honest. We're supposed to see that Adora is old-school, to the point of revisionist—with a total lack of self-awareness thrown in for good measure. That whole flashback about the interior design photo shoot was intense, albeit not in the ways I thought it would be. She didn’t sleep with the photographer (that we know of), and though Adora scolds her it’s not really that bad. And while it’s interesting to note that Camille’s reticence to go into her mother’s room has more to do with the floors than some genuine fear (though it’s probably both, honestly), the fact that the picture that ends up in the magazine doesn’t have either Camille or Alan in it is pretty heartbreaking.

Though we’re never treated to its actual contents, we know the article talks about how the townsfolk of Wind Gap like to speculate about whether Bob Nash or John Keene killed the two murdered girls, and we know that it drives a serious wedge between Camille and Amma, at least at first. In fact, the article is largely the reason the entire weird fight that leads to the showdown at the fitting room even happens. In fact, can we talk about that showdown at the fitting room for a second?

Yes, let’s talk about that showdown at the fitting room.

Adora takes Camille and Amma to the dress store because Camille’s all-black garb simply won’t do for the blowout Calhoun Day party thrown at the house. Amma is bickering with Camille about the article, and Adora says their fighting has opened up her rosebush wound again. “You’ve made me bleed, both of you,” she accuses. She is one manipulative hypochondriac, huh?

Camille is further guilted into trying on the dresses that Adora insists she wear, all of which show how many self-inflicted wounds are all over her body—something we’ve never seen in such a straightforward way. She shows Adora and Amma the wounds, and their reaction is stunned. Even Adora, who knew why Camille was covering herself up, seems to have forgotten how bad it was. “You weren’t there at the end,” says Camille.

“You’re ruined, all out of spite,” Adora tells her, and accuses Camille of being like her father. We're finally getting some info about Camille's real dad here, though nothing much to go on. It's clear Camille doesn't know much about him either.

The flipside of this traumatic episode is that it seems to draw Camille and Amma a bit closer. Amma apologizes for starting the fight and says she had a friend who also cut, and Camille makes her promise never to cut. These scars, Camille says, are why she “doesn’t do boyfriends.”

Speaking of boyfriends, what’s up with Detective Richard Willis going into the house with Adora?

It’s seen as a bit lewd, as far as the other patrons of the party (i.e. everyone in town) are concerned, and it’s unclear what Adora’s motivations are for showing Willis the house. “Those Crellin girls sure love those men with badges,” one of Adora’s friends jokes when Camille meets up with Richard. I want to believe that this is yet another mention of Adora boning Chief Vickery, which is a narrative I love. I don't even care if it ends up being false.

The tour is straightforward and Adora is fairly positive about Camille, but it clearly makes Richard look at her in a different way. I also think he’s one of the few people in town who clocks right away that there is something not right about Adora.

First of all, it’s basically Confederate-themed, which is creepy as hell. This takes place recently—not that the recent past is any excuse for that kind of dog-whistle racism—but Camille was listening in one episode to LCD Soundsystem’s American Dream, which came out in 2017, so it’s really recent.

Second, everyone in town is at the party—including, presumably, the murderer—so the vibe is incredibly tense throughout. The drama gets ramped up in these slow, measured ways, too. The suspicious look Jackie throws Adora, the undercurrent of this accusatory article, the rivalry between Vickery and Richard, Bob Nash’s clandestine drinking and increasing aggravation—even the little boy who first told Camille about The Lady in White shows up and steals food, creating a little bit of extra chaos running through the party. And what’s up with John’s girlfriend, the creepily Stepford-ish Ashley, accusing Camille of violating their “deal” by not including her quotes? (Ashley really wants to be involved in the narrative of this murder. Does she not get how the free press works?)

Side-note: Why haven’t we heard any more about the Lady in White? It was the clearest way we saw that Camille suspected a woman killed the two girls, and that the town had its own little legends.

Kurt Lacey, the guy who knew Camille back in high school and whom Amma put the moves on, approaches Camille at one point, and it’s clear he has something to tell her but it’s hard to tell what it might be. Unfortunately, their conversation ends up getting Camille a passive aggressive invite to girl’s night with her old “pit viper” high school friends.

Of course, none of this is helped by the fact that we learn Amma has taken some kind of hallucinogenic drug, and her performance in the Calhoun Day play has a sinister sheen once we know it.

The big, scary thing the tension is building up to ends up being...a fight.

Because we know Amma is on drugs, I sort of figured that fleeing from the play wasn’t going to be how she gets killed (if she indeed gets killed). It felt a little too convenient and of her own accord. It’s not surprising that Bob Nash and John Keene get into a fight—Bob is plastered—but the fact that this is the event all that tension is ramping up to feels anticlimactic.

It’s hard not to think the article is somewhat responsible: It’s put the entire town on edge, because everyone suspects the murderer is in their midst and Camille put a fine point on it.

Amma bolts into the woods, and Adora has a total, screaming meltdown while the authorities look for her. Camille takes off in search too and finds her, huddled in the creepy shed but unharmed. We’re supposed to expect to see her dead, and Camille even picks up a big stick as she approaches the shed to, I don’t know, fight a murderer? But she finds her unharmed and gets her back home to rest.

Adora tells Camille that she never loved her.

There was no gore to the most horrible moment this show has thrown yet, but the cool, detached conversation Adora has with Camille on the veranda is one of the most upsetting scenes we’ve seen. Adora says she wants to apologize to Camille, and Camille thanks her for not telling Richard about her scars. Adora asks whether he’ll find out, eventually, when they get close. “I don’t get close,” says Camille. And this, says Adora, is what she wanted to apologize for. She can’t get close because that was who her father was, “and it’s why, I think, I never loved you. You were born with it, that cold nature. I hope that’s some comfort to you.” A woman says that to her own child. Adora is capable of some serious violence.

Camille flees into the arms of Richard, and has sex with him without taking her clothes all the way off.

Where were the flashbacks this episode?

To go from almost nonstop flashbacks in last week’s episode to this one, where we really only saw the memory of the photo shoot, is interesting. We’re viewing the vast majority of the action from inside Camille’s head (save for those few glimpses from past episode of what people like Vickery and John Keene get up to when they’re alone), and a lack of flashbacks may mean that she’s becoming more clued into the things around her, and living more presently. Whether that’s a good thing is hard to determine—her present is horrific, and so is her past. But it’s progress in some direction, right?

Related Stories
Recap: ‘Sharp Objects' Episode 4, "Ripe"
Recap: ‘Sharp Objects' Episode 3, "Fix"
Recap: 'Sharp Objects' Episode 2: "Dirt'
This content is created and maintained by a third party, and imported onto this page to help users provide their email addresses. You may be able to find more information about this and similar content at piano.io
Advertisement - Continue Reading Below
More From Culture
Honor RBG With These Books & Movies
Sad Movies for When You Need a Good Cry
Advertisement - Continue Reading Below
'The Undoing' Is Packed With Stars
How to Join Marie Claire's Online Book Club
'His Only Wife' Is Our October Book Club Pick
The Novels to Read When the Days Get Shorter
The Most Heart-Stoppingly Scary Movies on Hulu
The Sexiest TV Scenes of All Time
The Scariest Movies on Netflix
'The Undoing' Is Fall's Most Thrilling Drama