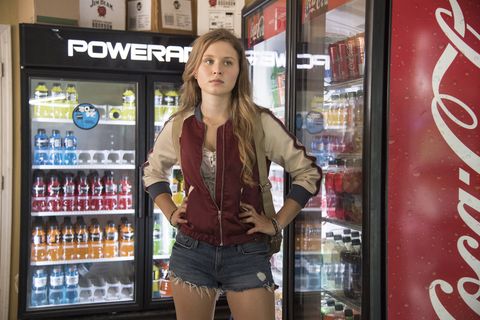 This is a recap for the second episode of Sharp Objects, which means there are SPOILERS ahead. If you haven’t seen the episode and don’t want to know what’s happening yet, come back once you’ve seen it. A recap of last week’s episode can be found here.

There’s a scene early in the second episode of Sharp Objects where Detective Richard Willis (Chris Messina) is talking to his barber about the flowers left in the window sill where Natalie Keene’s body was found, right in the center of town. “Could be a sign of a guilty conscience,” he speculates, to which the barber replies, “Around here, we just call it bein’ nice.”

Too much goes on at every level of this show—it was so hard to know what to include from this episode because everything felt important—to say it's about any one thing, but misunderstanding could be the theme of “Dirt.” This conversation, for example, displays a fundamental misunderstanding on Richard’s part about the ways in which the people of Wind Gap, Missouri, view each other. As an outsider from the big city, how could he really grasp the complicated dynamics of small-town neighbors? And unfortunately, knowing those dynamics might be central to solving the case of who killed two young girls in Wind Gap. After his shave, we see him returning to the creek where the first body, that of Ann Nash, was found, looking confusedly at the water.

Meanwhile, back at the dollhouse, Adora is fussing over getting ready for Natalie’s funeral, remarking on Camille’s clothes and talking about how close she was to the families. Are we supposed to see this as posturing? Or is she really that close, and we’re just viewing her with an edge of disdain because we’ve sided with Camille? Hard to tell, but Adora is still swanning around in elaborate getups and scolding Camille for doing her job at every opportunity, so she’s a little hard to like. Amma is told to stay home, despite having been friends with Natalie (news to us, and to Camille), and eat ice cream instead of going to the funeral. Also, what’s up with the housekeeper? Camille gave her a warm hug when she first came home, and she’s clearly a trusted fixture in the Crellin household, but it’s uncomfortably old-fashioned to have a servant. The close-up scenes of her scrubbing the floors, or being ignored in hallways, seems to imply we should be actively feeling weird about her, too.

Natalie’s body is still with the coroner, so there’s no body to bury at the funeral. Afterward, the family invites everyone to their house, where Camille briefly witnesses the Keene family in a fight with Bob Nash, father of Ann, though it’s hard to tell what it’s about. We also get a glimpse of Camille’s early Wind Gap social life—she’s surrounded by a group of gossipy women she knew in high school, now all mothers, guessing that, due to their odd closeness, it was probably Natalie’s own brother that killed her. The ease with which they can say horrible things about their neighbors is jarring. No wonder Elizabeth Perkins’ character refers to them women as “pit vipers.” (God, I love her.)

Camille, being nosy and slightly drunk off the large glass of liquor she poured herself (note how she gravitates to the bar in the family’s home), wanders into Natalie’s bedroom, taking in its purple walls, the terrarium in the corner, the stuffed animal spiders hung up around the room. Speaking later to Natalie’s father, she finds out that both dead girls were close friends, “until they weren’t.” Later, back in Natalie’s room, Adora finds Camille and scolds her for snooping in the daughter’s room. “I just don’t know how this family will ever get over this,” Adora says.

“We didn’t,” replies Camille. Clearly. Later, she runs into Amma and her friends pouring vodka into a Sprite bottle at the liquor store. Amma tells her she’s cool for not telling their mom know she snuck out, and Camille even lends her some money to pay for the “soda” before Amma roller-skates off. Here, she’s calm and poised and grasping at maturity, drinking and speaking confrontationally. It’s a far cry from how we see her later this episode.

Meanwhile, Detective Richard visits the morgue and is told that Natalie’s teeth were removed with household pliers, which would take some strength to do. He buys a pig head and tries to pull its teeth out with some pliers in his sink as an experiment, and finds it surprisingly difficult.

Camille, still clad in her funeral black (not a huge departure from her regular wardrobe, if we’re being honest), drives up to a ballpark set against some woods, where two little boys are playing. They tell her that another little boy, James, saw Natalie get abducted, and that she was taken by the Woman in White, the subject of a local ghost story. She goes to talk to James and finds him in a run-down house playing with a gun, his mother hooked up to an IV and only willing to talk if she’s paid. Later, Sheriff Vickery tells Camille that they discounted this little boy’s testimony because, growing up with a meth addicted mother, he was prone to telling lies, and the Woman in White is a ghost story. Still, Camille isn’t so sure. It’s clear she likes a woman for this crime, but is that only because she knows the violence women can inflict on themselves and each other and is trying to prove that her experience is universal? After all, women make up a very small portion of serial killers. (Thanks, Criminal Minds.)

It’s a sharp contrast to Detective Richard’s theory. Camille runs into him at the local dive bar, where they’re sent a round (with a side of lewd comments) by a group of men Camille clearly used to know in high school. It’s becoming clear to Richard that what he doesn’t know about the town is starting to get in the way of what he does know, and Camille agrees to give him a tour of local Wind Gap lore in exchange for him answering questions about the case.

Later, standing in her bra and underwear, we see the self-inflicted scars all over Camille’s body for the first time. Her mind flashes back to when her mother rejected her, even before her sister got sick and died. Camille tries to write the first story about Natalie’s death for her editor, who keeps calling the piece “her big break.” (He’s clearly going through something—his wife seems very concerned when he drinks or smokes, and tells him he can’t fix Camille like he tries to fix everything else). She has to stab herself with a needle and then get extremely drunk to get through it, and even then she contemplates deleting a paragraph about Natalie’s lavender walls, until she hears a scream and runs downstairs.

Here, we find a weird scene and I’m still trying to figure out what we were looking at. Adora cradles Amma, who is screaming and flailing on the ground, and gently holds her head. They were clearly working on the dollhouse. As Camille watches, it’s clear Amma was throwing a tantrum, but rather than scold her, Adora turns on Camille for drinking at Natalie's wake. When Camille points this out, Adora stares at her. “I just want things to be nice with us but maybe I don’t know how,” she tells Camille. “Natalie reminded me of you, always running around in the woods, coming home wild and filthy. I thought maybe I could help her, since clearly I couldn’t help you.” This moment is wild—it’s the first time Adora drops any pretense and starts to show that there’s a self-aware woman inside of her, one that probably regrets the relationship she now has with her firstborn.

Amma then sniffs, “I think Camille could be good.” Camille balks, knowing that the girl throwing a fit on the ground is still the same girl she saw in the convenience store earlier, then runs up to her room, mumbles, “Fuck it,” and files her story.

Last thing I think might be important: The show is giving us more flashbacks to the second trauma (after her sister’s death) that Camille went through. Visions of a teenage girl we don’t know yet are triggered by the songs Camille plays on the broken iPhone, and there’s something to do with drops of blood and a toilet bowl that she keeps flashing back to in moments of particular pain. It’s these images that flit through her mind as she lays in bed, dragging a needle across her stomach as the screen goes to credits.