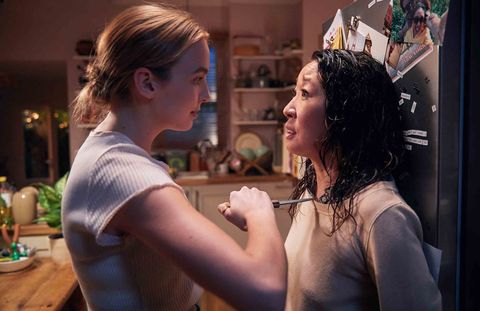 Television comedies are rife with female friendships. Rosa, Amy, and Gina forged an unlikely but incredible bond in Brooklyn Nine-Nine. Eleanor and Tahani have helped each other (and the rest of their group) navigate the complexities of the afterlife in The Good Place. Midge Maisel and Susie Myers' relationship goes miles past their original manager-client dynamic on The Marvellous Mrs. Maisel. And frankly, Glow wouldn’t exist without the sisterhood between Ruth and her fellow wrestlers.

But then we examine this year's best dramas, and suddenly things look a little...lonelier.

We aren't lacking complex female characters whose darkness rivals that of the mid-2000s TV Sad Men™. In Sharp Objects, we watched Camille Parker attempt to solve a hometown murder almost entirely solo, similar to the way she navigates her personal and professional lives. On Ozark, Laura Linney’s Wendy Byrde is an island who interacts with the women around her but prioritizes her relationship with her family (and their survival) above all other things. Arguably, Claire Underwood in House of Cards wouldn’t have rose to Commander-in-Chief had she taken time to bond with the people around her, and The Americans’ Elizabeth couldn’t have friends without compromising her mission. The Haunting of Hill House? Full of sad and conflicted women whose pals certainly don’t make an appearance. Even Villanelle and Eve Polastri, Killing Eve’s two incredible lead characters—who are obsessed with each other and have cultivated a mesmerizing, terrifying dynamic—aren’t friends. (Wherever the series may lead us, I doubt we’ll find the pair chatting at a restaurant and venting about men, am I right? Although, for the record, I would love if they did.)

All of which raises an important question: Why are dramas so terrible at depicting female friendships? Particularly because, in the over-the-top worlds of these shows, friends would make everything slightly less awful.

I get that isolation is part of the appeal. Amidst the genre’s stories about real problems and legacy hauntings and the end-of-days and the threat of constant psychological warfare, there isn’t a lot of time to cultivate a vibe with someone who exists outside the misery marathon. In the case of shows like The Americans or Killing Eve, things really are a matter of life and death.

But the stakes are high in comedies, too. Mrs. Maisel sees its titular character carve out her own path, much to the shock and horror of her family and anybody else abiding by strict fifties-era social norms. Brooklyn Nine-Nine is a TV show about a police precinct, and Rosa and Amy have found themselves in more than a handful of dangerous situations. The Good Place is literally about heaven and hell, what’s real and what isn’t, and in that sense it’s incredibly grim. Issa and Molly of Insecure grapple with insecurity (duh), imperfection, race, and relationships.

All of these themes are as intense and important as any featured in most television dramas. And the abundance of camaraderie in TV comedies serve to make the stories being told even better. In real life, friendships tend to exist and exist precisely to help you through your Important Issues.

I get it, nothing on television is real life. But when we’ve come to celebrate the most complicated and problematic of characters because they’re as messy as real people, you’d think we’d also want to see our dark, sad female leads go it alone a little less. We’re all dark and sad sometimes, and we are all problematic, and while it sometimes helps to tell ourselves that we can handle it all alone, eventually our need for community kicks in and we reach out to the women who mean something to us. Even if it’s to hear a pal say, “It is absolutely bananas that you are returning to the haunted home that’s terrorized your family for years.”

Why did no one on Hill House have someone to say to them, "Maybe don’t go back into that haunted house?"
Tina Rowden/NetflixNetflix

Sure, there are a few dramas that do celebrate female friendship: The Chilling Adventures of Sabrina prioritizes Sabrina’s dynamic with her best friends above even that of her ex-boyfriend, Harvey. Grey’s Anatomy pioneered the notion of “my person,” and continued to fly the friendship flag long after Dr. Cristina Yang departed. Big Little Lies literally needed the culmination of female friendship to bring the series to its stunning conclusion. And Margaret wouldn’t have met Tony Armstrong-Jones in The Crown without having reached out to her lady-in-waiting to tell her how bored and sad she was.

The thing is, life can be dramatic and dark and awful—adjectives we use to positively describe the shining stars of dramatic television. To get through it all in real life, we need a sense of community, or at least a reminder that friendship is actual and important—a signal that, should you find yourself coming up against the worst-case scenario, there’s someone who has your back. Life is very funny, too, and while we tend to keep comedy and drama apart, pop-culturally, it’d be even more exciting to watch them creep further into each other’s realms—including seeing the ways even the darkest female characters forge friendships, laughing over shared inside jokes, sharing trivial musings. Now that would be complex.

Related Story
There's Hope Yet: 22 Shows with Female Showrunners
Anne T. Donahue Anne T Donahue is a writer and person originally from Cambridge, Ontario, and is the author of the essay collection, Nobody Cares.
This content is created and maintained by a third party, and imported onto this page to help users provide their email addresses. You may be able to find more information about this and similar content at piano.io
Advertisement - Continue Reading Below
More From Culture
'The Great British Baking Show': Who Is Peter?
The Best Romantic Films of the Year (So Far)
Advertisement - Continue Reading Below
It's Time To Binge Hulu's Best Documentaries
When Will 'The Crown' Season 5 Be on Netflix?
'The Undoing' Season 2: Everything We Know
Cute Gift Ideas for Every Woman in Your Life
'The Undoing' Differs Sharply From the Book
'The Undoing' Is Packed With Stars
Differences Between 'The Undoing' Book and Novel
It's Been a Weird Year for 'The Bachelorette'