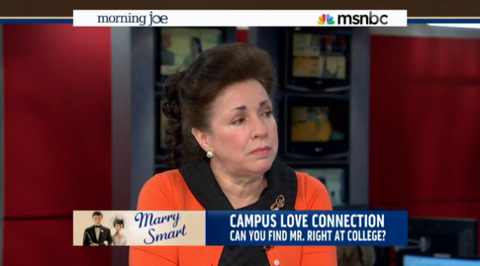 Author Susan Patton, better known as the "Princeton Mom," has been making the media rounds this week promoting her new book Marry Smart, in which she argues that women in college should be spending 75 percent of their time looking for a mate.

Patton caused a firestorm last year after she authored a letter in Princeton's college newspaper that advised female Princeton undergraduates to search for their husbands while at school, for they will never again walk among a better pool of smart, eligable men. (Can someone please produce a reality show that follows Patton attending typical college fraternity parties?)

Her new book contains even more controversial messages, including her likening "thirty-five-year-old single gals" to "skunks at a lawn party" and writing that, "If you are too drunk to speak, then you may be incapable of saying no or warding off unwanted advances. And then it's all on you." She also suggests, "If you've struggled with obesity through most of your teen years, then maybe surgical intervention is a good idea for you." But, she argues, her book is really about helping women get what they want. (Are you laughing out of sheer exasperation, too?)

Patton has raised eyebrows and invoked grimmaces throughout her media appearances, and her interview on MSNBC's Morning Joe Wednesday morning delivered that plus some. Co-host Mika Brzezinski sat down with the author and asked three young Morning Joe staffers to briefly join the conversation. Two out of the three women, all in their early 20s, disagreed with Patton's message and said they were more focused on work.

"Here's the problem," Patton said. "If you're going to delay looking for a husband and having your children until after you've spent the first 10-12 years developing your career, you're now going to be in your mid-30s and you're first going to start thinking about having a baby? That's problem number one, simply from a biological perspective. Your fertility has limitations."

The first problem here is not that a woman might consider having a baby in her mid-30s, it's that Patton is perpetuating what's been described as an oversold concept regarding female fertility—one that is often touted without any context. And she's doing it once again, on-camera, during a cringeworthy exchange with three young working women. Yes, it's easier for women to conceive at a younger age, but how much better are the chances?

A study by biostatistician David Dunson (now at Duke University), that has been writtten about in publications including Slate and The Atlantic, showed that by one measure, the fertility of a woman in her mid-to-late thirties fell by one third compared to a woman in her mid-to-late twenties. However, the study notes, "35-to-39-year-old's fertility two days before ovulation was the same as a 19-to-26-year-old's fertility three days before ovulation." According to The Atlantic's Jean Twenge, "older couples who time sex just one day better than younger ones will effectively eliminate the age difference."

Among some other more disturbing things, Patton argues that women who want to get married and have kids must do so early in their adult lives, and that there are biological ramifications to prioritizing one's career over one's personal life—like having trouble conceiving and "competing with women ten years younger for men." But women and couples have the opportunity to plan at all stages of life, and the above study describes how to do just that.

However controversial Patton's messages might be, though, one thing seems clear: the more media appearances she makes, the worse that message comes off.