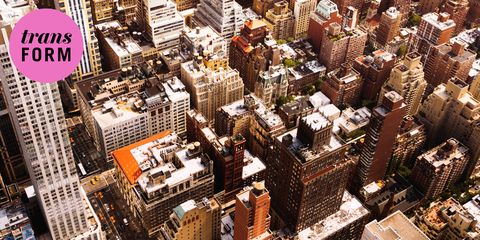 The life of a transgender person—in the U.S. and around the world—can be vastly challenging and rife with discrimination. But it can also be joyful, triumphant, and transformative—not just for the individual, but for those who love and accept them.

Thanks to the likes of Caitlyn Jenner and Laverne Cox, the numbers of Americans who fall into that last camp are growing. But we still have a long way to go on the awareness front.

Here, a look at the landscape of being transgender today. These numbers and statistics give you only a glimpse into the community—this is territory that research, science, and society are only on the cusp of breaching. But at least we've started.

Advertisement - Continue Reading Below
The number of estimated people who identify as transgender in the U.S.

According to 2011 findings from the Williams Institute, the transgender population represents about 0.3% of American adults.

The first year transition surgeries were practiced in the States

In 1965, the country's first gender identity clinic opened at Johns Hopkins University, and a year later, the first reassignment surgery was completed in the U.S.

How much gender reassignment surgery can cost

By no means is this an "average" figure. For a female transitioning to a male, one Philadelphia clinic estimates this price for phalloplasty, scrotoplasty, testicular implants, glansplasty, and transposition of the clitoris. And when you combine that with the cost of anesthesia and post-surgery hospital rest, the number soars. It's estimated that reassignment procedures can cost between $5,000 and $50,000—some can be as pricey as $100,000.

The number of companies with healthcare for transgender workers

In 2012, the Human Rights Campaign found that out of 636 companies analyzed, 207 provided healthcare coverage to transgender employees. It's not enough, but considering only 49 corporations delivered these services in 2009, it's a step in the right direction.

The percentage of transgender people who have attempted suicide

Disheartening research from the 2011 National Transgender Discrimination Survey reveals that 41% of transgender participants (2,644 out of 6,450) had attempted, at some point, to take their own lives. Sexual assault was the biggest cause, followed by physical assault, harassment in school, and job loss due to bias.

The date Laverne Cox was nominated for an Emmy

On this day, Laverne Cox made history. For her role as Sophia Burset in Orange Is the New Black, Cox became the first transgender person ever to be nominated for an Emmy Award.

The youngest age a person has undergone reassignment surgery

Kim Petras, a German singer and songwriter, used to go by "Tim"—until she became the youngest person in the world to transition. Learn more about her story here.

The number of transgender individuals in the military

Violence against transgender people often occurs at the hands of strangers—but also frequently happens at home. In a massive joint report from the National Center for Transgender Equality and the National Gay and Lesbian Task Force, released in 2011, 19% of respondents said they had suffered domestic abuse because of their gender non-conformity. Interestingly, male-to-females are more likely to experience family violence than female-to-males are.

The number of states that have clear laws protecting transgender people

The District of Columbia has laws in place, too, but for 32 states, transgender individuals can still be fired or denied employment for their identity. According to the American Civil Liberties Union, discrimination is prohibited in California, Colorado, Connecticut, Delaware, Hawaii, Illinois, Iowa, Maine, Maryland, Massachusetts, Minnesota, Nevada, New Jersey, New Mexico, Oregon, Rhode Island, Vermont, and Washington. We're hoping the rest of the states catch up quickly.

In April, ABC aired Diane Sawyer's intimate first interview with Caitlyn Jenner. It was a Friday night, a typical day of TGIF rituals like happy-hour outings—but for nearly 17 million people, it was more important to watch Jenner open up about her real self for the first time ever. It was four times the average audience for the show.

Another 50% admit that they've been harassed in the workplace, based on this National Transgender Discrimination Survey Report.

On the bright side, the same survey found that despite mistreatment, those who could afford to change genders felt more at ease in the office.

In just 300 minutes, over 1 million people flocked to @Caitlyn_Jenner, making her Twitter account the fastest-growing profile to gain this huge a following since President Obama joined the platform. Twenty-five tweets later, Jenner has racked up 2.73 million loyal fans.

Kenny Thapoung Social Media Editor When I'm not stalking future-but-never-going-to-happen husbands on Facebook, you can catch me eating at one of NYC's B-rated or below dining establishments—A-rated restaurants are for basics.
This content is created and maintained by a third party, and imported onto this page to help users provide their email addresses. You may be able to find more information about this and similar content at piano.io
Advertisement - Continue Reading Below
More From Culture
A Peek Into Priyanka Chopra's London Bookshelf
Fans Are Ready for Second Season of 'Bling Empire'
Advertisement - Continue Reading Below
What We Know About Part 2 of 'Lupin'
You *Need* to Follow the 'Bling Empire' Cast on IG
Watch the Trailer for the New 'Euphoria' Special
We've Getting a Season 2 of 'Bridgerton'
New Drama Movies That Promise to Move You
The Sexiest New Movies of the Year
Where Is the Cast of 'Gilmore Girls' Now?
A Look Back at Princess Anne's Life in Photos