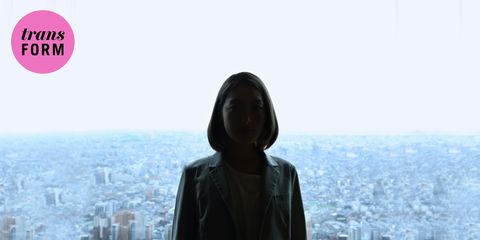 Ari Klamka, 28, is a lot like his peers—when he found himself in need of money for a special project, he created a GoFundMe page. But he wasn't looking to make a movie, or support a charity, or run a marathon. He was looking for the right to become himself.

Klamka is transgender, and he's facing an unfortunately common problem in the modern landscape of transgender issues: The cost of fully transitioning is prohibitively expensive.

"I've legally changed my name and gone through countless physical and social changes over the past two years," Klamka writes on his GoFundMe page. "Though the next step I will be taking is the biggest and most important to me." It's not just a chest reconstructive surgery he has to pay for, but the doctors' visits, pain medications, continued hormones, and lost wages from taking time off to recover. His job as a veterinary assistant offers insurance, but it won't cover his needs.

"I was born in the wrong body" is a common phrase used by transgender individuals to explain their desire for transition. And while not all those who identify as transgender want to physically alter their bodies or appearance, many see those changes as essential to becoming who they are and who they want to be. In too many cases, it can even be life and death.

When Caitlyn Jenner revealed her true self to the world, she did so after undergoing facial feminization surgery and breast augmentation. Transitioning isn't just an enormous mental and emotional step—it's an expensive one, too.

The financial barriers are abundant, but they are born of two central issues: insurance and discrimination. "For transgender individuals to have access to insurance coverage continues to be a real problem," says Anand Kalra, the Transgender Law Center's health programs manager. Kalra explains that the transgender community—due in large part to being discriminated against—face higher rates of poverty. Translation? They're less likely to be insured. "Just having access to regular medical care can be an extreme challenge," he says.

Dr. Douglas Senderoff, a New York-based plastic surgeon who often works with transgender patients, agrees. "Most of the patients I consult with for transgender surgery are in difficult financial situations due to discrimination," he says. "It's often difficult for them to find quality, high-paying jobs."

Navigating the pitfalls of insurance language and coverage is frustrating for anyone. When you're trans, it's that much harder.

Even for those who are insured, there are still endless hoops to jump through. Not only is it difficult to find physicians who are trained and respectful of trans issues—Kalra recounts stories of people making same-day appointments with trans-friendly doctors, then carpooling for hours to get there—but navigating the pitfalls of insurance language and coverage is frustrating for anyone. When you're trans, it's that much harder.

Some insurance agencies are making moves to update their policies. In fact, Aetna—one of the biggest health carriers in the U.S.—became the first major health-benefits company to cover gender-reassignment surgery for its holders in 2009. While others are following suit, there's still a divide between what's needed and what patients can get.

"Many providers have exclusions, deep in the plan documents, where they won't pay for things not only related to your transition, but because of your transition," Kalra says. "I've seen circumstances where a person broke their leg and had a cast put on, only to be told by the insurance agency that they're not going to pay for that because the person was on hormones. The insurance company was claiming that hormones had weakened the person's bones, even though clinical research has shown that's not true."

While many insurers are willing to work with individuals, there are far too many horror stories for them to be considered isolated incidents. "It can be exhausting and intimidating, and so confusing," Kalra says.

Worse, it can be life-threatening. In the face of desperation, it can seem to some like the only option is an unlicensed back-alley practitioner—resulting in botched surgeries and potentially fatal injections.

Thankfully, there's recourse. Ten states plus D.C. have issued non-discrimination stipulations specifically related to health insurance. You can go through an appeals process in many states if your insurance says it won't cover specific items. "Sometimes, even when your insurance should say yes to something, they say no, because that's what they're used to when it comes to transgender needs," says Kalra. "For years, there weren't many rules. Now, they can still say no—but you can do something about it."

Dr. Harrison Lee, the surgeon who performed Caitlyn Jenner's facial feminization procedures, does see the insurance landscape changing. "It's important to understand that for insurance to pay for any transgender surgery, the surgery needs to be considered 'medically necessary,'" he explains. Thanks to Jenner and other television shows depicting transgender characters, "Americans are becoming more aware of the plight of the transgender community. Health-insurance companies realize the need to cover transgender surgery as a medically necessary procedure as opposed to a cosmetic one. I have noticed that insurance companies are more cooperative when seeking approval for coverage."

For now, the solutions are those standard-bearers of American healthcare: patience and perseverance. And there's creativity.

Nina Iraheta, 23, is a trans woman working as a receptionist at an optical company. She emigrated to the U.S. from Brazil at the age of 13. "I already knew by that age that I was in the wrong body," she says. She experimented in high school with eyeliner and growing out her hair. "The littlest changes were making a difference, emotionally," she says. "I was happier."

She learned about hormone treatments in college, and after graduation, she found herself with the typical 20-something conundrum: no savings, crazy rent, and major student loans. Those needs, along with the cost of hormones and a desire for breast implants, led her to join SeekingArrangement.com.

The site helps introduce "sugar babies" to "sugar daddies"—it's a place, according to its tagline, "where beautiful, successful people fuel mutually beneficial relationships." The average sugar baby receives $3,000 a month from a relationship, and out of the 3.8 million sugar babies on the network, there are over 15,000 transgender individuals. Iraheta makes sure her suitors know that she is transgender, and she now has one sugar daddy she sees on a weekly basis.

"It's been good," she says of her three-month experience. "You have to have a connection with the person; it doesn't work if you don't. I put all the money he gives me towards surgery."

"Sometimes, I ask myself, 'Is this worth it? Is it worth going through all this?'"

Iraheta wants to go through "the whole process," and is currently undergoing laser hair removal treatments while continuing her hormone therapy. She's hoping to start her full transition by the age of 24.

Both Klamka with his GoFundMe page and Iraheta with her sugar daddy describe their situations as "frustrating," but they're committed to making it work.

"Sometimes I ask myself, 'Is this worth it? Is it worth going through all this? Do I need these surgeries?'" Iraheta says. "But then I realize that yes, I do. I would be happier. I already am happier."