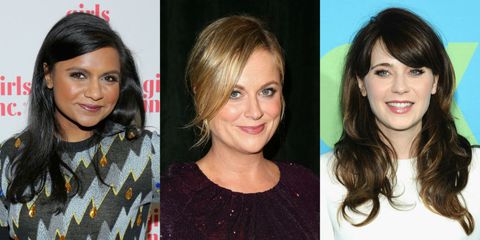 The Golden Globe nominations are officially in, and I have many thoughts—specifically on the female nominations for Best Actress In a TV Series. While the pool is rich with talent (including Girls's Lena Dunham, Veep's Julia Louis-Dreyfus, and Nurse Jackie's Edie Falco), there are a few notable names missing from the list. Not only was Mindy Kaling denied recognition for her much-beloved Mindy Project, but Amy Poehler wasn't nominated for her work in Parks and Recreation (slightly awkward considering she's hosting), and award-season darling Zooey Deschanel didn't get a nom either. So what do these ladies have in common? They all star in broadcast network shows, which are most certainly not the new black.

Both the Golden Globes and the Emmy Awards are embracing cable and streaming shows with open arms (shoutout to Amazon's Transparent for scooping up two nominations in its first season), but where does that leave the talented actresses on basic cable? Largely unrecognized, that's where. With the exception of a well-deserved nomination for Jane the Virgin's Gina Rodriguez, the awards powers that be are clearly favoring female comedians who are lucky enough to be on networks that allow them to push boundaries.

Lena Dunham's character on Girls wouldn't be nearly as laudably groundbreaking had the show aired on CBS. Nor would the colorful language that defines Julia Louis-Dreyfus's performance in Veep be in the picture had it aired on ABC. So what I'm saying is: Maybe it's a little unfair to begrudge the female comedians on broadcast networks who are no less impressive but are much less able to drop an F-bomb or casually chat about sex. In fact, the confines of basic cable make the subversive comedy in shows like The Mindy Project, Parks and Rec, and New Girl all the more impressive.

While Kaling has never been nominated for a Golden Globe (I'm working on a change.org petition to fix that as we speak), fellow Fox star Zooey Deschanel was honored with nominations in 2012, 2013, and 2014, but failed to nab a nod this year despite the fact that her show consistently breaks the mold of broadcast network comedy. This season alone fans were gifted an entire episode dedicated to Jess's encounter with a "micro-penis," which—like "I Slipped"—forced the writers to get seriously creative (a "ghoulish raisin" and "tiny pigeon's egg" were among my favorite euphemisms).

And yes, less boundary-pushing broadcast shows like The Big Bang Theory and Modern Family were also rejected by the Golden Globes, but their family-friendly style may be a little passe for voters who want a side of Louie with their main course of Orange Is the New Black. Makes sense, but if the Globes want to reinvent themselves by recognizing fresh, groundbreaking talent, maybe they should take another look at the totally un-basic comedians on basic cable. Amy Poehler, Mindy Kaling, and Zooey Deschanel won't be starring in an Amazon scripted series any time soon, but their talent is just as spot-on as ever, and their shows might be even more cutting-edge.

Mehera Bonner Contributor Mehera Bonner is a news writer who focuses on celebrities and royals—follow her on Instagram.
This content is created and maintained by a third party, and imported onto this page to help users provide their email addresses. You may be able to find more information about this and similar content at piano.io
Advertisement - Continue Reading Below
More From Culture
Queen of the Screen
The 12 Sexiest LGBTQ+ Movies Around
Advertisement - Continue Reading Below
53 Wild and Completely Iconic Vintage Porn Films
Dale Moss Is a Super Important 'Bachelorette' Star
It's Been a Weird Year for 'The Bachelorette'
Political Books to Read Ahead of Election Day
The Sexiest Movies on Amazon Prime
HBO Is Giving Fans 2 Special 'Euphoria' Episodes
What to Know About Tayshia's 'Bachelorette' Cast
Clare Crawley's 'Bachelorette' Cast Is Out