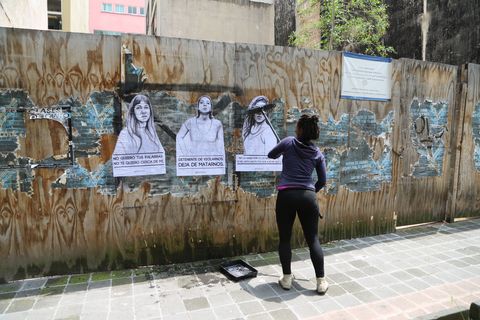 Do you walk out the door, bracing yourself for any comment a guy might throw your way? If you're a woman, odds are the answer is yes. In the U.S., 65% of women have experienced street harassment. In the world? Let's just say the stats are pretty bleak.

A new project by Brooklyn-based artist Tatyana Fazlalizadeh shines a light on street harassment in Mexico City. Commissioned by Fusion to travel to create an installation of her acclaimed art project called, "Stop Telling Women to Smile," the 29-year-old traveled to the city to create and exhibit the project–the first time it had been shown outside the U.S.

Mexico City is notorious for its street harassment, where its rate of sexual violence against women has marked it as one of the highest in the world. To put it into perspective: The situation got so bad that the city started offering female-only cars on the city's subways and female-only buses–painted in the color pink–in 2008.

"People have asked, 'Was there one thing that happened that made you start this project?' And there wasn't. It's the sheer fact that it happens all the time," Fazlalizadeh told Fusion.

The project features 76 short stories of the individuals who spoke out against street harassment. And for Fazlalizadeh, thankfully, it didn't seem to be a struggle to get women to speak up: "I feel like people kind of have to warm up, because this is kind of private issue that women I don't think talk about that much outside their group of friends or whoever. But I felt like here, [in Mexico City], people jumped right in."

Learn more about the project and view the video here.

Politician Says Woman Is "Too Ugly" to be a Rape Victim

These Will be the Biggest Feminist Issues of 2015

Samantha Leal Senior Web Editor I'm Sam, the senior editor at MarieClaire.com.
This content is created and maintained by a third party, and imported onto this page to help users provide their email addresses. You may be able to find more information about this and similar content at piano.io
Advertisement - Continue Reading Below
More From Culture
'The Undoing' Season 2: Everything We Know
'The Undoing' Differs Sharply From the Book
Advertisement - Continue Reading Below
'Virgin River' Wasn't Really Filmed In California
Differences Between 'The Undoing' Book and Novel
'The Undoing' Director on the Polarizing Finale
The Warmest, Coziest Gifts for Their Next Night In
An Ode to the World's Best Haircut: The Mushroom
Yes, Prince Charles Really Survived an Avalanche
How to Join Marie Claire's Online Book Club
'Cobble Hill' Is Our December Book Club Pick