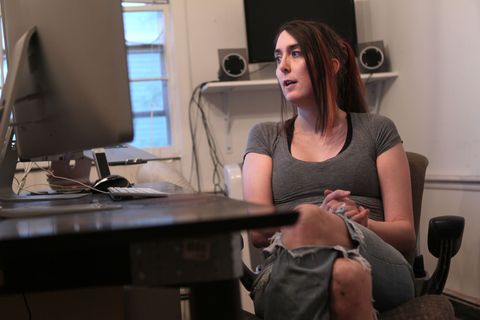 Remember Gamergate? It was seemingly everywhere last fall, a controversy that put a spotlight on the horrible abuse women face when they speak out online, especially in the world of gaming. And it's far from over.

Back in October, game developer Brianna Wu spoke out about sexism in the gaming world, and her life has never been the same since. She was forced to flee her home after getting doxxed (having her personal information released publicly) and receiving credible death threats. "I genuinely think my life is in danger," Wu said in an interview with Cosmopolitan.com. "There is a literal playbook — start attacking the woman, discredit the woman, hack the woman."

That playbook was the focus of a recent episode of Law and Order: SVU, featuring a character inspired by Wu and fellow Gamergate targets Anita Sarkeesian and Zoe Quinn:

Months after the threats began, things still haven't gotten better for Wu. In an essay for Bustle, she wrote that she has received a total of 44 death threats, and countless instances of abuse online. She's gone to court to file restraining orders against a man who said he crashed his car on the way to her home. He posted a disturbing YouTube video about his goal to cause the "Wu-pocalypse."

"My capacity to feel fear has worn out, as if it's a muscle that can do no more," she wrote. "There's not a single day I don't ask myself why I'm here, and why I keep doing this."

Here are just a few instances of the abuse she's suffered in the past 24 hours alone.

This was just sent to me by #Gamergate. pic.twitter.com/6NkAgUZbY4

"I just hope he accomplishes his goal. That way we would only have Anita and Quinn to take care of. " pic.twitter.com/Lv54DPRPDT

This morning, Wu tweeted that she went to court to file paperwork against one of her harassers. "Protip: When a court orders you to stop threatening someone, you should stop threatening them," she tweeted.