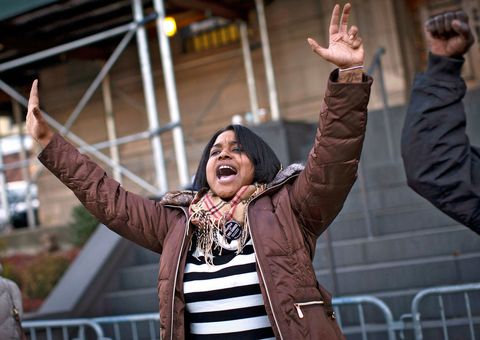 My sister Emerald was crying when I answered her call. She asked if I'd heard the news. "What news?" I responded. She said our mother had just called and said our father, Eric Garner, had stopped breathing. That's all she knew. I hung up, panicked, and called my mom and then my grandmother; neither answered. I was desperate for information. Was it an asthma attack? He had bad asthma—I do, too, but as long as we get medicine, we're fine. I was at work in Brooklyn and ran to catch the bus to start the journey to Staten Island, where my parents lived. I had to see for myself that my dad was fine.

I had just transferred to the train when I called my aunt, my father's little sister. She was humming more than crying, a deep guttural moan. I knew something terrible had happened. When she said, "He's gone," I burst into tears. The lady next to me had no idea who I was or why I was crying. Still, she hugged me and said, "It's going to be OK." Four strangers formed a circle around me. One said a prayer. It was beautiful.

My aunt asked me to meet her and my cousin, so I got off the train and drove the rest of the way to Staten Island with them. As we neared my parents' neighborhood, I saw police cars parked at the corner where my dad liked to hang with his friends. I also noticed police tape and news vans. My cousin started Googling for news and found an item that mentioned my dad had experienced a heart attack. I was furious. How did the news know before his family?

We went to my grandparents' house first—reporters were already there. One told us my father's friend had taken a video of the incident. My brother Emory found it online. When I saw my dad on the screen, I was so relieved! He was talking to a police officer—agitated, yes, but alive. He said, "I did nothing! What did I do?" Suddenly, three policemen swarmed him. One placed his arm around my dad's neck like a noose. I saw my father fall to the ground and found myself shouting: "Get off him! Leave him alone!" When I heard his voice, gasping, "I can't breathe!" all the air left my lungs. I watched as the same officer who had choked him thrust his knee into my father's head, pinning him to the ground. I kept shouting, "Get off him!" Then, I heard my dad say, again: "I can't breathe."

There's a moment when I saw my dad wave. His final good-bye. I felt dizzy, then sick.

Instead of helping him, the officers backed away, leaving my father on the ground in the fetal position. The camera starts pulling away, so it was hard to see, but there's a moment when I saw my dad wave. His final good-bye. I felt dizzy, then sick. I'd just watched my father die.

Meanwhile, my mother had spent the afternoon at the hospital, waiting hours for answers. Finally, someone from NYPD Internal Affairs told her that her husband was gone. We still didn't know why, so my grandfather and I drove to the corner where it had happened. As I stood there looking at the spot where my dad had been wrestled to the ground, several people asked, "Are you Eric's daughter?" With tears streaming down my face, I nodded yes as a few explained what they had witnessed: My father had just broken up a fight when the police arrived. He had a history of run-ins with the police—all small stuff, like driving without insurance or selling untaxed cigarettes—but they had no grounds to arrest him that day. Another man told me my dad was a good man and that he always bragged about his kids. My heart broke in a million pieces.

My whole family went into deep mourning. We were deeply moved by the turnout at his funeral on July 23. Hundreds of people came. Reverend Al Sharpton delivered the eulogy and then led the first of many #BlackLivesMatter marches in New York. It was encouraging to see how many people, of all races, are tired of black men being fatally singled out. First Trayvon Martin, then Michael Brown, then my dad. It has to stop.

I'm not antipolice, but I hate what they did to him.

I kept quiet at first, and focused on my grief, but when the indictment came down, and Daniel Pantaleo—the officer who put my father in the choke hold that resulted in his death—was not held accountable, I had to do something. My grandmother had the idea of rallying in front of the Staten Island post office. No flyers, no posters, just a bunch of us chanting my father's name. The initial one was in September; we still rally there every Tuesday and Thursday. At first, only a few dozen people showed up. I got discouraged—we weren't making an impact. When I spoke to a reporter in December, he asked if I was on Twitter. I said, "No." He replied: "People are waiting to hear from you." So I signed up as officialERICA GARNER with the handle @es_Snipes and had 500 followers in an hour. As of February, I was up to more than 7,500. Suddenly, people had a way to connect with me, and condolences from all over the world poured in. One Pakistani woman sent a video of her friends reading poems they wrote inspired by #BlackLivesMatter. I realized then that though my father's death helped spark this now-global movement, it's way bigger than just him. In December, I marched with Sharpton in Washington, D.C. There, the Garners sat onstage with the Browns and the Martins. We're in this together. That same month, my grandmother met President Barack Obama.

My life has changed—I lost a father but am part of a movement that's focused on change. I have never been contacted by anyone at the NYPD; we are pursuing a civil case against the department, the individual officers, and the EMT who did not do more to save my father. I'm not antipolice, but I hate what they did to him. He broke up a fight right before he died, and I am going to do my best to continue another fight—to prove that #BlackLivesMatter and that my dad's did, too.

This article appears in the April 2015 issue of Marie Claire, on newsstands now.