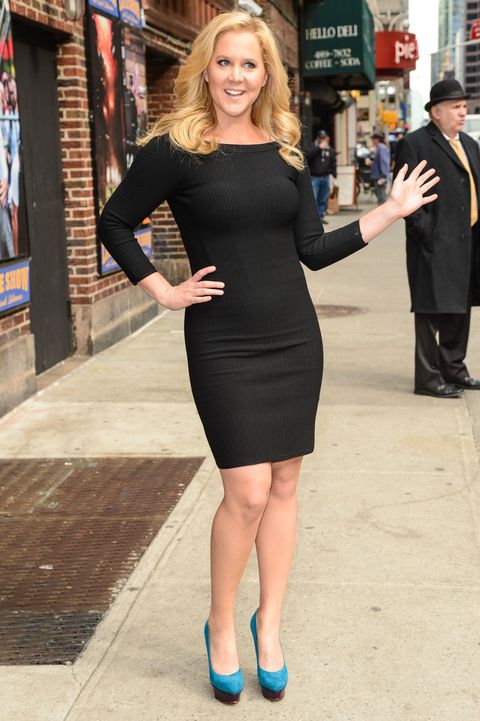 Update, 6/29: Rumor no more: Amy Schumer was offered the chance to fill Jon Stewart's shoes on the Daily Show, she told the Daily Beast.

"I was so honored to be asked and considered," she said.

But while it must be a crazy career-highlight kind of moment to be offered such a plum gig, it's probably an even crazier career-highlight kind of moment to turn it down. "And then I thought, 'Well, I could give everyone I love a job and we could all be together for five years. But [...] I love not knowing," she said. "And I've never done anything safe or to make money for that reason. So, you know, I said, 'I can't start now.'"

If we were already queen of the world like Schumer is, we'd feel the same way. Desks are for losers. *skulks away to sit at desk*

Original story, 3/31: Not so into Trevor Noah's dimples now, are ya? (Especially considering that he, erm, missed a social-media tidy-up after he got the gig.)

According to Grantland editor in chief Bill Simmons, Amy Poehler, Amy Schumer, and Louis C.K. were all being considered for the Jon Stewart Daily Show hosting job.

What? WHAT? We had a 50 percent chance of a blonde woman named Amy satirizing the news for us, and another dude still won out? To be fair, Amy P. might have been reaching for the stars, as Simmons explains, and fine—Amy S. too after that hilarious masterpiece Trainwreck—but the probability, guys.

PS: I don't think Poehler or CK was realistic, but had CC caught Schumer a year earlier - very realistic. Now she knows she can make movies.

Timing really is everything, kids. At least there aren't any hard feelings between Noah and one Amy.

Congrats @Trevornoah you will be amazing! We are so lucky to have you!

Trevor Noah Will Replace Jon Stewart on 'The Daily Show'