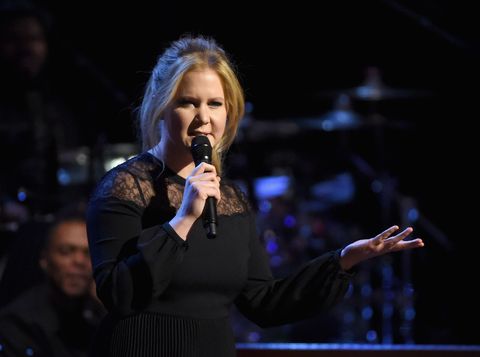 Amy Schumer is not at all afraid to say she's a feminist. And she doesn't understand why you would be, either. In a panel at SXSW—where she discussed her newest movie Trainwreck—the comedian and actress got real about the movement.

"I don't think people know what the word feminism means: a social and political equality for women. I think if you're against that, you're a crazy person, or you don't know what it means, and that we don't actually have it is a bummer," she said, according to Indiewire. "It feels like we should be further along. That's why it was so exciting to see Patricia Arquette shout out to equal pay because it's insane it's still an issue. People are afraid for some reason. Some cultures are completely based on the fear of women."

But that's not the only insightful comment Schumer shared with the audience. When talking about her comedy, she explained her issue with being labeled a "sex comic."

"When I brought [stand up special Amy Schumer: Mostly Sex Stuff] to Comedy Central they said, 'It's mostly sex stuff.' And I said, 'Well let's just call it Mostly Sex Stuff.' They said, 'Okay!'" she explained. "Sex sells...and I'm a sexual person so I like talking about it. But there's a double standard. Some of my favorite male comics talk about sex a lot and they don't get labeled that. The double standard of that bothers me."

All we can say is: #AmyforPresident.

Patricia Arquette on Aging: Men Are Not Having These Conversations

Vanessa Bayer Hilariously Explains Feminism to Sleater-Kinney, Gets it All Wrong

Samantha Leal Senior Web Editor I'm Sam, the senior editor at MarieClaire.com.
This content is created and maintained by a third party, and imported onto this page to help users provide their email addresses. You may be able to find more information about this and similar content at piano.io
Advertisement - Continue Reading Below
More From Celebrity
Ariana Grande Got Married Over the Weekend
Ariana Grande Quietly Married Dalton Gomez
Advertisement - Continue Reading Below
Joie de Tracee
Jennifer Lopez and Ben Affleck: Everything We Know
Harry & Oprah's Mental Health Doc Has a Title
Serena Williams Might Miss the Tokyo Olympics
Jennifer and Ben Have "Unreal" Chemistry Together
The Sussexes Marked Archie's Bday in a Lovely Way
Queen's Cousin Accused of Selling Access to Putin
Meghan Wore a Meaningful Necklace for Vax Live