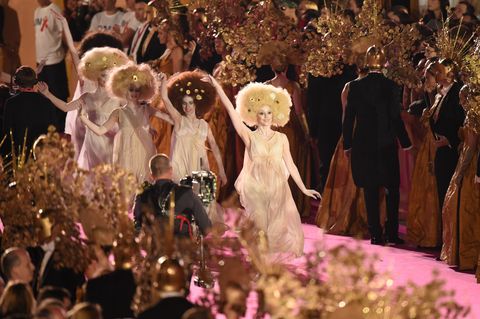 What do you get when you bring drag queens, crazy costumes, thousands of revelers, lots of champagne, and Charlize Theron together in Vienna? You get Life Ball. And if you haven't heard of it, that'll be changing very soon. Despite the fact that it's one of the biggest philanthropic events for AIDS/HIV awareness, and despite the fact that it's in its 23rd year, many people in the U.S. are unfamiliar—so when I got the invite to see the big celebration/party/event for myself, I was on board.

Actually, quite literally. Here's the thing about Life Ball: If you're invited to cover/attend, as press or a personality or a drag queen or a stylist or a model, you're probably flying on the Life Ball Plane. And this plane, while a normal plane on the outside, is pretty much anything but on the inside. The champagne (or your liquor of choice) is flowing before you even board, music is playing, and people are having a grand time. That includes a twerk-off with Carmen Electra, whose arms look like something out of a Photoshop job, and a strip tease by Amanda Lepore, while cameras light the aisles as everyone cranes to get a view.

That includes a twerk-off with Carmen Electra, whose arms look like something out of a Photoshop job.

Paula Abdul was there, and Dita von Teese was there, and Arianna Grande's brother Frankie was there, and a bunch of fashion people I didn't know the names of were there. Kelly Osbourne was also there, and she came back to sit on her friend's lap and laugh at inside jokes no one could hear. There was also bongo drum-playing at some point?

We woke up in Vienna, and de-boarded the plane to a literal red carpet, where foreign press was there to take pictures of me the important people.

In fact, many Queens had somehow managed to execute a full-on change and looked like they were headed to a prestigious event—and not just the shuttle bus. As I scuttled down the red carpet (I guess everyone loves to be photographed after an 8-hour red-eye flight, but not me), we all headed to our hotels and I got to take in a bit of Vienna–then it was off to the cocktail party kickoff for the night.

The theme of this year's Life Ball was gold, and many embraced it—the venue featured models wearing gold body paint and huge gold wings. As I posed for this pic I joked that it was like the adult version of Disney World. They did not laugh.

People really partied at this thing, even though the *real* event was the next day. I asked a drag queen what the secret was to staying alive, considering the rate everyone was going. "Life Ball is what you make of it, honey," she said to me wisely.

"Life Ball is what you make of it, honey."

The next day was the press conference, where the likes of Mary J. Blige and Charlize Theron were speaking, with Kelly Osbourne in attendance. And guess who else was there? Sean Penn! SEAN PENN. (Unfortunately he was on the other side of the room. I was pissed.) There was also an award given to Prince Harry's favorite charity, and he was supposed to be there, but apparently he got called on some military thing and instead this really nice guy accepted on his behalf, but let's be real, if I would have seen Prince Harry I probably would have pulled a crazy-girl-in-the-crown moment, because I am not above that, so maybe it worked out for the best.

It allowed me to focus on the more serious stuff, like Gery Keszler, who founded Life Ball to benefit AIDS Life and raise money for HIV/AIDS research. He told the story about the creation of the event and how he loved the mix of elegance and kitsch. He told the story of the adversity he faced early on, and now, the amount of support he's gotten for his cause. But perhaps the most moving part—the part that made it all real and worth it—was when Gery recounted the life of a good friend who had recently passed from AIDS. As he told the story of their friendship, he broke down and began to cry. That was the moment things came into clear focus—this was a cause to end death by celebrating life.

"We're making a loud scream for awareness," Keszler said. "A louder scream than ever for life."

"We're making a loud scream for awareness. A louder scream than ever for life."

Later on, we attended another cocktail party, where I sipped Moet champagne and wore a Marchessa Notte dress that was (duh) gold. We then headed to *another* cocktail party, where we sipped more champagne (and where my dress was still gold). Finally, it was off to Life Ball—and down the sparkly, magenta carpet as Vienna's City Hall lit up the sky in hues of purple.

The opening ceremony itself, held outside, draws 40,000 attendees, all hoping to watch the show and take part in the revelry. There, Charlize and Sean Penn gave speeches urging us to pay attention to the crisis of AIDS. Other notables gave remarks, and the ceremony concluded with Jean Paul Gaultier's retrospective fashion show. Then, 1,500 ticket holders entered the City Hall doors to a party the likes of which I have never seen before—people in ball gowns and people in costumes and everyone in gold and glitter and sparkle drank and danced on various floors and rooms. It was amazing and overwhelming and crazy and fun—but mostly, it was the best people watching I've ever been privy to.

The dancers danced and the models walked and the partiers partied—and I stood there in awe, taking it all in.

To learn more about Life Ball, with tickets that sell out in minutes, head to LifeBall.org.