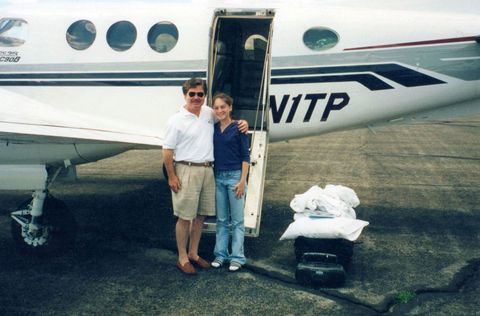 When I was 18 years old and a freshman in college, the FBI came to my home and arrested my father on fraud charges. Shortly after he was sentenced and surrendered to prison, I discovered he had left me in nearly $100,000 of debt, having taken out numerous credit cards in my name. I never intended to forgive him.

Despite what happened later, my childhood was nothing short of a fairytale. I grew up in the affluent suburbs of Washington, DC around the corner from the Kennedy's Hickory Hill estate, among politicians, spies, and newscasters. Everything on the outside had the veneer of an American Dream—the sprawling estate, the luxury cars and private planes. My parents appeared to be happily married, and my two sisters and I were the best of friends.

But trying to keep up with the Joneses led my father down a path of fraudulent business deals with Stratton Oakmont, the brokerage firm founded by Jordan Belfort (Leonardo DiCaprio's character in The Wolf of Wall Street) and then a different company, which led to his imprisonment.

After my father left for prison and the truth began to unravel, I struggled for years trying to figure it all out—and then figuring out how to deal with it.

The debt left me in an unbearable state of shock and paralysis. He'd even laundered money in my name. My father kept insisting that he did it for the benefit of the family, hiding it from the government so that we had a place to live. But soon enough, credit agencies and attorneys were calling me daily, leaving scary voicemails and threatening to sue me.

Because I didn't have the money to pay up, I defaulted on payments and my credit score plummeted. I never sued my father, which would have been my only option in clearing all the debt. I never sued him because I believed him. I believed everything he ever told me until I hit rock bottom. Denial is powerful.

But the anger was there. Resentment insidiously made its way through me. I abused alcohol and drugs and had promiscuous sex, all of which served to shield me from my pain until I was at risk of losing my life.

Finally I sought help and entered recovery. When I stopped numbing the pain, there were days when I thought my feelings would kill me. I wrote furiously. I still didn't believe it would ever be possible for me to forgive my father.

But then I started volunteering with families and children of the incarcerated at the Office of Restorative Justice. There, a woman named Amalia Molina asked if I would participate in a restorative justice workshop—a powerful approach to justice that focuses on transformation through dialogue with both the victim and the offender, creating a pathway to forgiveness.

"My father kept insisting that he did it for the benefit of the family, hiding it from the government so that we had a place to live."

One week later, I traveled with her to prison and spoke to incarcerated fathers. I cried in front of them, and spoke about the pain and betrayal I felt. They cried too. Then they took responsibility for their crimes and apologized on my father's behalf. It was one of the most powerful moments of my life.

And somewhere in that moment, I started to forgive.

But what I also learned that day was that it's possible to forgive someone without being in contact with them. That was a boundary I had set for myself and continue to set today, based on my own experience. For others, it might look different.

What most of us forget is that forgiveness is not for the other person. It's a gift we give to ourselves. Once I could forgive my father, I could begin to forgive myself for all the years I was self-destructive, for all the years lost in anger and grief, blaming others. Forgiveness gave me permission to walk into a future that's much, much brighter than my past. And I can't wait to see what comes next.

Christina McDowell's memoir, After Perfect, is on sale now.

Simon and Schuster
Christina McDowell Christina McDowell is author of 'After Perfect'.
This content is created and maintained by a third party, and imported onto this page to help users provide their email addresses. You may be able to find more information about this and similar content at piano.io
Advertisement - Continue Reading Below
More From Culture
New Drama Movies That Promise to Move You
The Sexiest New Movies of the Year
Advertisement - Continue Reading Below
A Look Back at Princess Anne's Life in Photos
Where Is the Cast of 'Gilmore Girls' Now?
'The Bachelor' Is Back!
Who Is "Queen" Victoria on 'The Bachelor'?
Matt James' 'Bachelor' Cast: Everything We Know
Get to Know Serena Pitt From 'The Bachelor'
The Best Lesbian Movies Streaming on Netflix
Listen to the Best New Love Songs of 2021 (So Far)