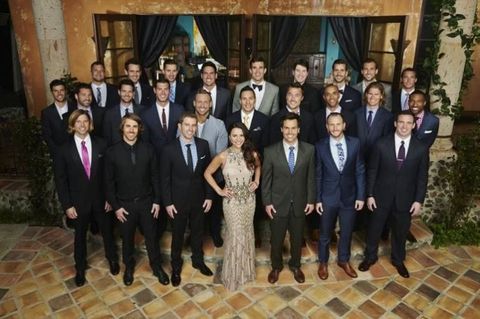 A scene on ABC's The Bachelorette involved teaching some adorable kids sex ed. But even though that was the entire purpose of the scene, some basic science lessons were apparently too scandalous for network censors, according to Slate.

On a group date at an elementary school, a group of guys had to teach children about puberty and the birds and the bees. (It turned out the kids were all actors, which makes sense given their scripted-sounding questions and choreographed "ewwws.")

A boy asks Ryan what a clitoris is, and he actually gives a realistic answer without scarring the child for life. But even though Ryan said it to a group of kids, ABC apparently didn't think it was family-friendly enough, because the word got bleeped over and over again:

They also blacked out a scene where a tampon gets inserted into a mock vagina, and an anatomical chart on the board behind the guys. Which, again, is also basic anatomy—and not even a real person's body. Yahoo also notes that they bleeped out the word penis in other scenes, so at least they're being fair?

ABC declined to comment on the issue to The Huffington Post. And it may not have been their intention at first to go censorship-crazy, but rather faced backlash from the network's standards division. But honestly—come on, people. This is basic anatomy. Are we really that scared of talking about bodies?