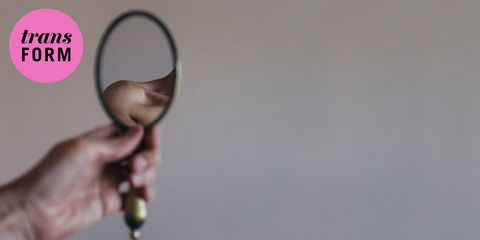 How well do you remember events from when you were three years old?

It's a useful question for cisgender people–that is, those who identify with the gender they were assigned at birth–to keep in mind when considering what it's like to be trans. Joanna Harper is a medical physicist and a transgender woman. "I knew I was a girl the same time you knew you were a girl," she says. "In terms of my early life, I played a lot with my sister. I vaguely remember thinking we were the same."

Realizing later that she was considered a "boy," being different didn't hit her in a big way until around the age of six. "I was walking home from school with a friend, and I turned to him and asked if he ever wished he could be a girl," she recalls. "He looked at me like, 'that is insane.' I knew I was a girl, but it shocked me how different I was."

Children who know they're transgender from a young age are a source of controversy in the medical community (and the community of laymen who believe that children can't possibly be sure about such a thing). Some doctors have expressed their support for the use of puberty blockers to allow trans preteens more time to decide if they'd like to fully transition. Others are comfortable proceeding directly to the hormone injections that will begin to transform their young bodies.

A recent study found that transgender children understand their gender the same way their cisgender peers and siblings do. They're not confused at all. But it's not always one or the other—blue or pink, trains or dolls. A range of experiences certainly exist.

It's not always one or the other—blue or pink, trains or dolls.

"I'm not one of those people who felt like I was in the wrong body all of my life, or identified as trans early on as a kid," says Meredith Talusan, a trans female writer and advocate. "I grew up in the Philippines, where there's so much more social acceptance toward gender variance. I got to a certain point where I started to incorporate feminine clothing into my wardrobe. Being feminine was just a part of my identity before I even transitioned."

When Talusan met a non gender-conforming classmate named Ben, it was the first time she saw someone dressed in women's clothes to the extent where others assumed they were fully female. It inspired her to experiment and see what dressing similarly was like. "I felt more comfortable being perceived as a woman in the world," she says. "That was my own personal journey."

"The concept of gender identity, or the difference between gender and sex, just weren't there for us growing up."

Other people don't begin to make any physical or even superficial changes until they're significantly older. Brynn Tannehill is the director of advocacy for SPART*A, an organization for LGBT members of the military, and a trans woman who didn't transition until later in life. "I was having difficulties that were the result of me not addressing these issues earlier, choosing to ignore them," she says. "Eventually, the consequences of doing nothing were worse than the consequences of doing something."

Tannehill went to a therapist who specializes in gender identity and eventually decided to transition. "One of the key things to overcome for people in my generation, Generation X, is that the concept of gender identity, or the difference between gender and sex, just weren't there for us growing up," she explains.

Another resource that didn't exist for prior generations is the wonderful world of the internet. Jeff Miller, a research analyst who identifies as a transmasculine person, says online media and communities are a huge help for young people exploring gender identity today. "Finding out what the word 'transgender' was when I was 18 really helped me," Miller says. "I found other people like me on YouTube and Tumblr."

After watching lots of videos, Miller started to experiment with a different look. "One of the first tests I did was cut off all my hair, and then I started presenting in a more traditionally masculine way," Miller says. But Miller wouldn't be the first person to find comfort in a YouTube tutorial.

Finding one's gender identity isn't like flipping a switch, even after a medical transition. "It's a dynamic process. You're not going to know the person you will end up being until you are actually that person," says Talusan. She spent a lot of time wanting to be perceived as a woman, minus the transgender label. "Then one day I woke up and discovered, this doesn't feel complete. I feel like [being perceived as a woman] erases history, and my queer and trans identities. It's important for me to acknowledge my history and struggles to be who I am."

She spent a lot of time wanting to be perceived as a woman, minus the transgender label.

After Tannehill transitioned to female, she realized a number of hurdles still lay ahead. "There's this kind of mad gallop to do all these things that were previously forbidden," she says. "Then you realize, wow, I've changed everything in my life, but then I still have to deal with how society sees me. And experiences are affected by myriad factors, like race and region and whether you are going male to female or female to male."

"The most rewarding aspect is that I feel like my perspective is unique, that there are things that I know about the world that not many people do," Talusan says. "Imagine if everybody in the world had a period of time where the world has perceived them as both a man and a woman." Pretty insightful, indeed.