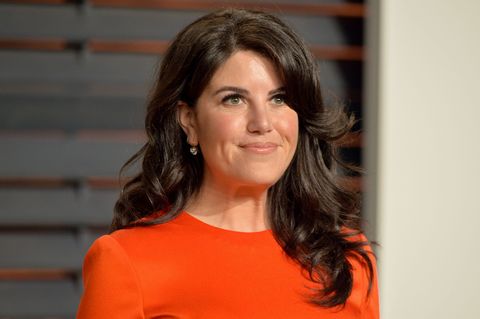 When Monica Lewinsky was 22 years old, she entered into an affair with then President Bill Clinton. When she was 24, after the affair had ended, the news broke. For the following two decades—and to some extent, to this very day—she endured humiliation and ridicule. But now, at age 42, Lewinsky is finally settling back into herself, and has become an outspoken advocate against cyberbullying in the process.

Often considered cyberbullying's first victim, Lewinsky—who now has a master's degree in psychology—has become a lecturer on the consequences of bullying. And in a tell-all new interview with The Guardian, she opens up about her experiences with image tarnishing, her attempts to escape her past life, suicidal thoughts, and being ridiculed by everyone from Jay Leno to notable feminists like Nancy Friday (who once said Lewinsky could pay rent with "her mouth.")

On how she felt looking back:

"I felt like every layer of my skin and my identity were ripped off of me in '98 and '99. It's a skinning of sorts. You feel incredibly raw and frightened. But I also feel like the shame sticks to you like tar."

On being deemed "that woman":

"I don't actually know why this whole story became about oral sex. It was a mutual relationship."

On being publicly mocked:

"I think it's fair to say that whatever mistakes I made, I was hung out to dry by a lot of people—by a lot of the feminists who had loud voices. I wish it had been handled differently. It was very scary and very confusing to be a young woman thrust on to the world stage and not belonging to any group. I didn't belong to anybody."

Lewinsky states that she came "very close" to attempting suicide, even going so far as to figure out how she'd do it. "I think some young people don't see suicide as an ending, but as a reset."

"To be able to give a purpose to my past, if I'm stuck with my past, feels meaningful to me. Integrate what has happened to you. Integrate the experience, the faster the better. There's shame about the shame. So there's a tendency to not want to tell someone what's going on."

Read the full interview over at TheGuardian.com.