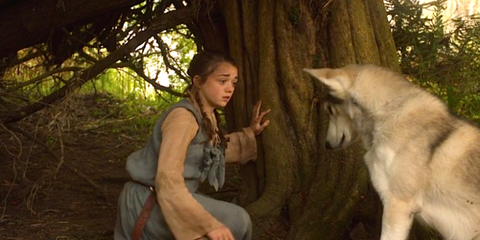 Game of Thrones returns tonight for its seventh season, and while we're all definitely excited to see what happens when Daenerys and Cersei battle it out for the Iron Throne and how Jon Snow (or should we say Targaryen?) saves the North from the White Walkers, there are some other lingering plot questions that we desperately need answers to. Here are 10 loose ends the show needs to address this season.

I just write "Gendry?" because there are too many Gendry-related questions for a single subhead. We last saw Gendry rowing off to relative safety in Season 3. Ser Davos helped him escape Dragonstone, where the Red Woman, aka Melisandre, was itching to use his blood for ~magic~ to help Stannis take the Iron Throne. Gendry was allegedly headed back to King's Landing, but we literally haven't heard a word about him since.

Gendry is important, you'll remember, because he is the only surviving bastard of Robert Baratheon and, therefore, the last known living person in the kingdom with Baratheon blood. This gives him a claim (how tenuous is yet to be seen) to the throne.

So that brings us to the questions (plural) of Gendry. Where has he been? What has he been doing? Will he attempt to take the throne himself or align with another contender (probably Dany—Cersei seems an unlikely ally for him)?

Leaked set photos showed Joe Dempsie, the actor who plays Gendry, on set for Season 7, so we *know* (as much as you can *know* anything about Game of Thrones) that he's coming back, after three long seasons away, and the people demand answers.

TF AM I LOOKING AT?! pic.twitter.com/FbGsOOvxOT

2.What is Melisandre going to do?

When we last saw Melisandre, she had been banished from the North by Jon Snow, on warning of death if she ever returned. She happens to believe Jon is the Prince Who Was Promised, though, so we can't imagine this is actually the last we'll see of her. Will she try to win her way back into Jon's favor? Will she switch sides and find yet another promised prince to follow?

3. Speaking of Melisandre, will we ever come back to the fact that she's secretly a very, very old woman?

Because really, we never adequately addressed that.

4. And while we're on the subject of Red Women, what about the other Red Priestess?

Then we have Kinvara, another Red Priestess introduced in Season 6. Remember her? She met with Tyrion and Varys because she wants to help Dany—who she happens to believe is the Promised One. Will Kinvara show up again? Will she go head-to-head with Melisandre? Will we see a Red Priestess magic battle in Season 7? Are we getting a little ahead of ourselves? All of these things are possible.

5. Will The Hound get to take on The Mountain?

We thought this sibling rivalry was laid to rest when both brothers seemed, well, laid to rest. But The Hound miraculously survived the wounds from his battle with Brienne of Tarth and The Mountain has been, erm...revived? Whatever we want to call it, he's now a Frankenstein-esque monster serving Cersei with unprecedented loyalty. Will The Hound be the one to finally bring his scary (scary, scary) brother down?

6. Who will Sansa side with—Jon or Littlefinger?

At the end of Season 6, Jon Snow had been proclaimed King of the North, which is all well and good except that it was his sister, Sansa, who orchestrated the tactical move that ultimately won the North back from Ramsay Bolton. Oh, and that she's the actual Stark with the actual claim to the North.

After the dust settles, Littlefinger approaches Sansa and admits that his endgame is to sit on the Iron Throne with her as his queen. Even though Sansa rebukes him, it's hard to read exactly how she really feels about the proposition.Then, when Jon is met with cheers and support, she and Littlefinger share a look that's even harder to read. What is Sansa going to do? Answer: Anything she wants, after what she's been through.

7. Will we ever see Benjen Stark again?

Benjen is Ned Stark's younger brother, who was serving at The Wall as First Ranger when Jon arrived there in Season 1. Then he went missing. He was mentioned several times after this, but we actually meet him again in Season 6, when he helps Bran and Meera. Benjen is kind of, sort of dead (he was attacked by White Walkers, but saved by the Children of the Forest—long story), so he can't go south of The Wall. With the all-out battle against the White Walkers looming, Benjen seems poised to play a pretty pivotal role.

7. Will Ser Jorah cure his Greyscale?

Ser Jorah, Dany's once-trusted advisor and not-so-secret admirer, contracted Greyscale when he was bringing Tyrion to his queen to try to regain her favor. Normally, Greyscale is all-consuming and incurable, but we do know that Stannis Baratheon's daughter, Shireen, had the disease and someone, somehow stopped the spread. Will Ser Jorah discover the same cure? Will he ever reunite with Dany? It seems likely, but we'd still really like to know for sure.

In Season 1, the Stark children (and their cousin Jon Snow!) all got direwolves. By Season 7, most of those wolves (and a few of the children) are dead. Jon Snow's wolf, Ghost, is still with him, but aside from Ghost, the only surviving Stark direwolf is Arya's, Nymeria. After Nymeria bit Joffrey while protecting Arya and her friend in Season 1, she sent the wolf away, knowing it would be killed otherwise.

And we have literally not seen Nymeria since. Now that Arya is back and wandering the woods of Westeros on her own, however, it's high time that she and her puppy reunite.

TBH, the deaths of the direwolves have been harder to handle than most of the human deaths on the show. If there is any justice in the world of Thrones, Nymeria is alive and we'll get confirmation of that before the show ends.

9. Who is taking care of Ser Pounce?

Ser Pounce is Tommen's cat and Tommen is, well, no longer able to care for a cat. So who is? Is Cersei going to channel all of her fierce mothering instincts toward Ser Pounce? We can only hope so.

This is the least pressing because it has the least to do with the actual plot of the show and everything to do with Tumblr-worthy fan theories and 'ships. Brienne of Tarth, badass lady warrior, is at the center of the show's only real love triangle and it's 1) glorious and 2) possibly entirely unintentional.

Brienne and Jaime's chemistry was palpable when they were traveling back to King's Landing together:

He gave her his (VALYRIAN STEEL) sword:

Cersei was even jealous:

But then, Brienne met Tormund. And even though she's mostly weirded out by him:

He's head over heels in love with her and it's the most obvious and adorable thing ever:

Not that she needs a man to be happy (and it's totally possible they could both declare their love to Brienne and she would just be like, "Nah, I'm good, but thanks anyway"), but if there's one character whose romantic outcome I'm invested in, its Brienne's.

Kayleigh Roberts Kayleigh Roberts is the weekend editor at Marie Claire, covering celebrity and entertainment news, from actual royals like Kate Middleton and Meghan Markle to Hollywood royalty, like Katie Holmes and Chrissy Teigen.
Advertisement - Continue Reading Below
More From Culture
'The Bachelor' Has Already Finished His Season
An Investigation Into the Next 'Bachelorette'
Advertisement - Continue Reading Below
The Sexiest TV Scenes of All Time
Unmissable Horror Movies Coming Out This Year
Treat Yourself to a Chick Flick Tonight
Who Will Be on 'Bachelor in Paradise' in 2020?
Can We Talk About Kelly's Mom From Love Is Blind?
The Best Reactions to the 'Love Is Blind' Finale
Hilary Duff Hints About 'Lizzie McGuire' Reboot
Ryan Murphy's Producing a Love Letter to Hollywood