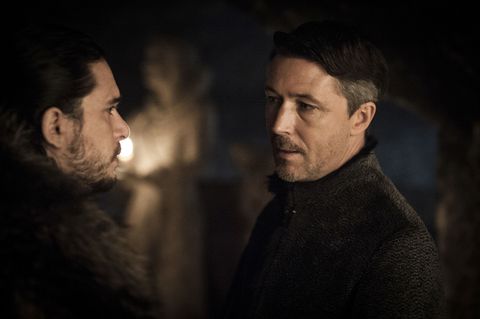 Littlefinger is finally dead on Game of Thrones, and the internet is extremely pleased about it. But you know who's not thrilled? Aidan Gillen, who's spent the past seven seasons playing Westeros' resident creep.

In a post-episode interview, Gillen talks about getting the "infamous" call from Game of Thrones producers: "[Showrunners Dan Weiss and David Benioff] never ring you up—maybe once in six years. I learned about that call from [Roose Bolton actor Michael McElhatton] when he told me about his call and he talked about how it made him feel. And I thought if I get that call—or rather when as this has got to happen sooner or later to a character like Littlefinger—I wondered how it would make me feel. You start to think about because the show is such a part of your life for so many years. What will your life will be like outside of it? It's a potent loss."

Gillen says he was "left a little bereft," and that being killed off "immediately makes you quantify the hugeness of what that experience has been over the last seven years, which has been massive."

On a more amusing note, GOT showrunners promised a "river of blood" for Littlefinger's death—which is definitely what the character got, dying in a pool of bright red liquid after his throat was slit by Arya.

"I said I thought Arya would deliver the blow. So it was as promised," he said. "My last day on the set wasn't that scene. [The execution] was the second scene I shot. I quite enjoyed doing things that way—shooting [Littlefinger's death] and then shooting what comes before. When you know what's coming you relax a little in the way you interact with the others. There's something else that seeps into your performance—a kind of serenity. But yeah, I did find it quite emotional [shooting the finale scene]. And I don't necessarily mean that I was sad, but it's an emotional moment for the character so I felt what he was feeling."

By the way, Gillen 100 percent got to keep his mockingbird pin: "I had already let them know I wanted it, and I cleverly worked it so I got two. There's one from my cloak and one from my tunic. So I got the large and the small size—one for me and one for my son."

RIP, Littlefinger. This sweet interview kind of makes us miss you.