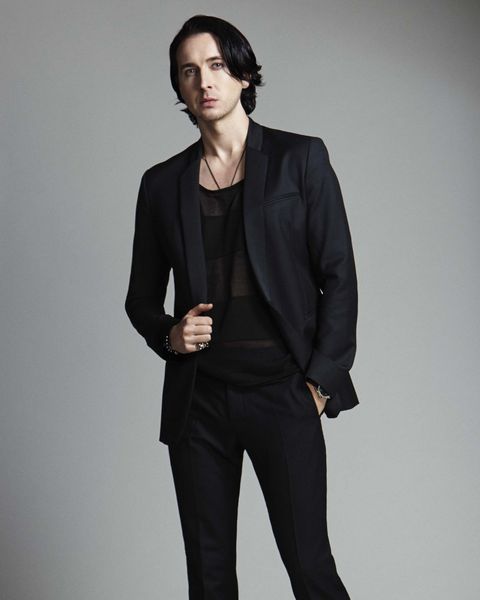 For Project Runway season 10 winner Dmitry Sholokhov, returning to compete on All Stars season four was a hard sell. "If you go and do it again, you have to win again," he says. "That's a lot of pressure." It was only after being invited to judge auditions for Project Runway season 13 that the designer had a change of heart. "I decided to do it again because I love television," he admits, adding, "and I'm not afraid to take a risk."

You can say that again. Whether it was removing the stuffing from a coil of fabric cord to weave a cocktail dress or dyeing the fringe of a red-carpet gown with tea (which left him blowdrying the dress at the last minute), throughout the season the designer made bold, albeit time-consuming, choices that set him apart from his competitors. "Everyone had sharper teeth at this point," he says. "Your pieces have to stand out."

That they did. When the final three contestants were asked to design an eight-look finale collection representing the four seasons (in a mere four days), Sholokhov paired unusual fabrics—neoprene with lace, wool with tulle—which he then slashed and manipulated to create three-dimensional effects. "I tried to marry elegance and fluidity with an athletic sensibility," he says. The result impressed even his most vocal critic, MC Senior Fashion Editor and All Stars mentor Zanna Roberts Rassi. "Dmitry is an artist," she says. "What makes him so talented isn't just his technical ability and good taste, it's also his confidence." (Says Sholokhov: "I do listen to criticism, but I also follow my instincts.")

For now, the Belarus native, who has a collection with QVC that debuted in February, is focused on the big picture. "I want to have my stores in every major city in the world," he says. "I seem calm from the outside, but inside, trust me—it's a hurricane!" And poised to take the fashion world by storm.

See his final collection, in all its Marie Claire magazine glory, here:

Nina Garcia's Fashion Week Diaries: Your Behind-the-Scenes Peek at All the Action in Real Time

This content is created and maintained by a third party, and imported onto this page to help users provide their email addresses. You may be able to find more information about this and similar content at piano.io
Advertisement - Continue Reading Below
More From Fashion
Hats That Will Make a Statement This Fall
The Most Exciting Jewelry Trends for Fall 2021
Advertisement - Continue Reading Below
Maxi Dresses That Work for Every Occassion
The 100 Best Shopping Sites to Browse Through
The Perfect Vests for Layering
How to Make White Sneakers Look Brand New
Colors of Fall You're About to See Everywhere
Madewell Is Selling Their Old Jeans on ThredUP
Jean Jackets You'll Live In
Wide-Leg Jeans Are About to Be Your Favorite Denim