Today's Top Stories
1
Priyanka Pulls Back the Curtain
2
Could This Be the Last Year of Roe v. Wade?
3
What to Buy From Madewell's Secret Stock Sale
4
Jaclyn Rothenberg Pursues Pantsuits In Every Color
5
Listen to the Best New Love Songs of 2021 (So Far)
Getty Images

As a chronically anxious person, the concept of thunder jackets (you know, those teeny, adorable, weighted vests dogs wear when they're anxious?) has always fascinated me. Like, how do these not exist for humans and how do I get one in my sweaty palms?

Turns out, a similar solution may already exist. No, science has not yet invented a magically soothing, yet wearable jacket that I can wear to ease my stress when I'm on deadline. But studies suggest that weighted blankets—AKA blankets lined with equally distributed weight—have a similar effect on insomnia and anxiety, with the added pressure helping you sleep deeper and with fewer disruptions at night. Intrigued much? Let's investigate.

Related Story
This Weighted Blanket May Cure Your Sleep Problems

To be clear: the concept of weighted blankets isn't really new. Children with autism and elderly patients with dementia have been using them long before now. But thanks to a certain viral start-up called Gravity, weighted blankets are making the rounds again.

Earlier this year, Gravity raised 4.7 million dollars for its $279 "weighted blanket for sleep, stress, and anxiety." Because some were skeptical of its claims to actually treat insomnia and anxiety, among other things, it eventually dropped those terms in its marketing. Was it all just a bunch of BS? Maybe. But there's still evidence that weighted blankets can help alleviate those symptoms even if they're not a sure-fire cure.

The thinking behind deep pressure therapy is that the added pressure on your body simulates the feeling of a warm hug, sparking a release of the hormone oxytocin and making you feel relaxed, less angsty, and generally more warm and fuzzy inside.

One 2014 study examined the effects of thunder jackets on dogs diagnosed with separation anxiety or generalized anxiety disorder. It found that the canines who wore the pressure wraps as recommended—with moderate to deep pressure—showed a decrease in heart rate and stress-reducing behaviors like yawning and tongue-flicking after only 15 minutes.

In humans, the research on weighted blankets is scarce, but still telling. A 2015 study in the Journal of Sleep Medicine and Disorders showed that weighted blankets used over two weeks on a group on insomniacs had a positive impact on sleep, where subjects reported feeling that their sleep quality had improved and that they experienced a decrease in night movements. The weighted blankets were especially beneficial if they weighed at least 10 percent of the subject's body weight (blankets usually range from 10 to 30 lbs.). 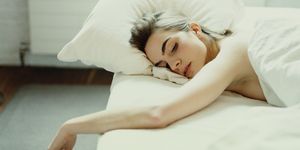 How to Fall Asleep Faster and Sleep Deeper

Another 2012 study in Australasian Psychiatry placed individuals from an inpatient psychiatric unit in different sensory rooms to calm their nerves, finding that weighted blankets were especially helpful at temporarily reducing stress and clinical anxiety.

So, chances are, if you're feeling very stressed and anxious, you shouldn't swap professional treatment with a fancy blanket. But if you do have trouble falling asleep, weighted blankets can simulate the effect of a swaddled baby—at least helping you feel less restless in bed and potentially get a deeper night's sleep. And, hey, if you happen to experience a mood boost in the process, too—even better.