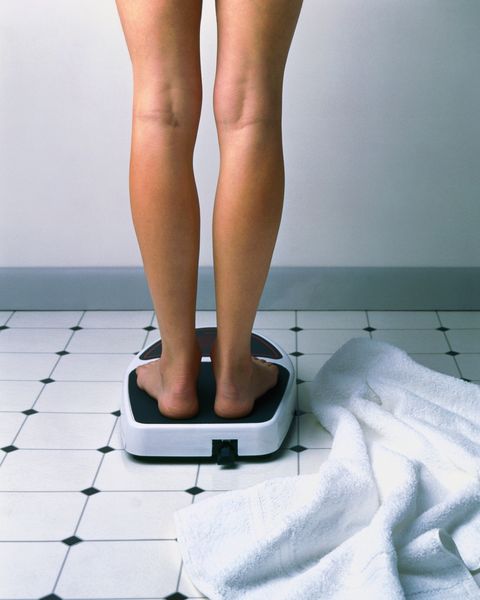 Losing weight is a tricky business. You have to adjust your eating habits—no more midnight Seamless regrets orders—and mind your portions (no, an entire sleeve of Oreos is not an acceptable lunch). And then there's exercise—pounding the pavement or cranking up the resistance in SoulCycle, giving it your all certainly isn't easy. But eventually—and yes, it will happen—all of that hard work pays off with the healthier, trimmer body you envisioned since 50 pounds ago. Congrats!

Now, remember when we said weight loss was tricky? Here's the thing: Most doctors will recommend that a healthy plan to slim down means losing one to two pounds a week. But with all the crazy and unsustainable gimmicks out there—*cough* waist training *cough*—some people could shed way more than that M.D.-approved amount. And when your body undergoes such a dramatic change so fast, well, it can't handle it.

While we certainly commend anyone for living a healthier lifestyle, here's what you need to know before you do anything drastic.

When you lose a lot of weight quickly—and we're talking 50-plus, not five pounds—your skin doesn't have enough time to bounce back, and its elasticity can't adapt to your new body. This sagging worsens if you lose weight at an older age, smoke, or expose yourself to excessive sunlight. Usually people have to undergo some form of cosmetic surgery to remove this excess skin from their body.

2. You could suffer from depression

Weird right? You'd think someone would be the complete opposite after transforming their body, but it's a true side effect. According to a U.K. study publish in the journal PLOS One, people who lost a significant amount of weight over four years were more likely to be depressed than those whose weight only shifted slightly. Study authors aren't saying that weight loss causes depression, but they point out that there could be a psychological association between the two.

Think about it: When you're losing weight, it's pretty much all you can focus on. And when you finally reach that goal, it's like, "Now what?" Definitely not something you should shrug off.

Newsflash: The weight that's dropping like flies isn't all fat—you're actually losing muscle, especially if you're doing something extreme like crash dieting. One study from Maastricht University in the Netherlands restricted the diets of almost 50 people—one group ate 500 calories a day for five weeks while the others ate 1,250 calories over 12 weeks. On average, all of the participants lost 19 pounds, but those on the restricted diet lost 3.5 pounds of "fat-free" mass (AKA muscle).

Not to sound like a broken record—actually, we kinda do—but there is never a quick-fix solution to long-term weight loss. If you're looking to slim down, doing it the healthy way will garner you results, and it might just save you from some of these consequences.

Kenny Thapoung Social Media Editor When I'm not stalking future-but-never-going-to-happen husbands on Facebook, you can catch me eating at one of NYC's B-rated or below dining establishments—A-rated restaurants are for basics.
Advertisement - Continue Reading Below
More From Health & Fitness
How to Be More Spiritual in 2020
Sleep Supplements for Sweeter Dreams
Advertisement - Continue Reading Below
31 Must-Have Workout Apps for Women
Are New Year's Resolutions Still a Thing?
Gifts That Will Delight and Destress
Products Every New Mom Will Love
Found: The Best Running Sneakers
Debunking the Dangerous Hymen Myth
The Virginity Testing Crisis
Carpe Diem? YOLO? Here's What a Shrink Has to Say