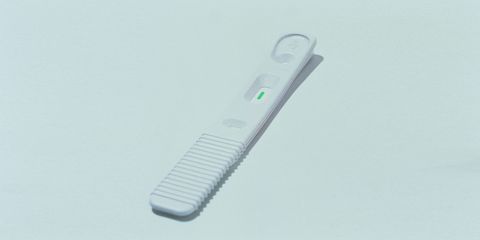 When I found out I was pregnant—three years after I found out I had herpes—I immediately asked my obstetrician what I could expect of my regular symptoms during the course of my pregnancy. She told me they likely wouldn't change much.

It turned out she was wrong. I had chronic outbreaks, which consisted of nerve pain, itching, and tingling. These symptoms persisted for the majority of my pregnancy, but my care provider seemed surprised, and unsure what to do—a common problem for pregnant women in my position, I soon learned.

It wasn't that she didn't know how to treat my genital herpes during my pregnancy—she prescribed me a higher dosage of antiviral medication, in accordance with guidelines—but she didn't really seem to have a sense of what could happen next.

"Between the second and seventh month of my pregnancy, I had herpes symptoms more days than I didn't."

Dr. Sheila Chhutani, a board-certified OB/GYN in Dallas, Texas, says that herpes symptoms during pregnancy really depend on what symptoms are like before conception. "If you're the person who gets two outbreaks a year, I wouldn't necessarily expect you to get more than that," she explains. "If you are somebody who gets outbreaks frequently, you probably will still continue to get outbreaks frequently."

And while that may be the case for some, it wasn't for me.

My pregnancy brought an increase in both frequency and severity of my herpes symptoms. Between the second and seventh month of my pregnancy, I had herpes symptoms more days than I didn't. It was uncomfortable and, frankly, scary—particularly since my doctor seemed just as confused as I was.

But simultaneous burning sensation and morning sickness aside, what can be hardest about being pregnant with herpes is the isolation. Since herpes isn't something many people talk about publicly, finding support, particularly as a soon-to-be parent, can be difficult. When I was pregnant, and didn't have much more than Google searches to guide me, I landed in a pile of fear-mongering stories about fatal herpes infections in newborns. And that's about it.

Chelsea, a 30-year-old mother of two in Nashville and a certified doula, started an online support group for mothers with HSV (herpes simplex virus) upon looking for one and not finding any. She had been in online herpes support groups for a while, but sought out more specific support upon learning that she was pregnant.

"More than 30 percent of pregnant women in the United States have a genital infection with HSV."

"What I've seen that is different from other groups is that pregnancy and birth itself are some of the most intimate things we go through as women, so going through that and also sharing the same diagnosis and stigma, it bonds the women so much," Chelsea says of her support group, which can be accessed via Community Support at ProjectAccept.org.

But this lack of support does not reflect the statistical reality. The CDC estimates that one in six people in the United States has genital herpes, which correlates to a large number of pregnant individuals with the virus: According to a study in the New England Journal of Medicine, more than 30 percent of pregnant women in the United States have a genital infection with HSV. "If people did start talking about herpes, they would find out there's probably a lot more people that have it than they ever realized," Dr. Chhutani says.

While treated herpes is fairly benign in adults, it can be fatal for babies who become infected during delivery. Dr. Anna Wald, professor of medicine, epidemiology, and laboratory medicine at University of Washington, tells MarieClaire.com that newborns who contract herpes can get very ill and die, even with antiviral treatment, and some have brain damage and neurological complications. According to Wald, somewhere between 400 and 4,000 babies born in the United States contract herpes at birth each year. But because most states do not cite herpes as a "notifiable disease" (a disease that is required by law to be reported to the government for monitoring purposes), there is no reliable way to count it.

People who know they have herpes are at the smallest risk for transmitting herpes to their babies, says Wald. But statistically, most people who have herpes don't know that they're infected. Providers regularly deliver babies to people with herpes without necessarily knowing it. Lack of transmission between the mother and the baby mostly comes down to luck: "If the mother has never had a primary outbreak, the likelihood of her having one is very small," explains Dr. Chhutani. In turn, the risk for transmission is incredibly low. "The outcome we're most concerned about in pregnancy is neonatal herpes, and that's when women get herpes at the end of pregnancy for the first time," she says. Neonatal herpes is most likely to occur during birth, and is more common with a vaginal delivery but can also happen during a c-section.

It's women who get herpes late in their pregnancies who are at the highest risk for birth complications. Think about it this way: If you're just acquiring HSV as an infection, you don't have the antibodies yet. Unfortunately, "we don't have a way of currently of identifying these patients," Wald warns. "There's also no way to test people for this." Current treatments are not effective in pregnant patients who are having their initial herpes outbreak.

"Simultaneous burning sensation and morning sickness aside, what can be hardest about being pregnant with herpes is the isolation."

In fact, the American Congress of Obstetricians and Gynecologists doesn't recommend testing all pregnant people for the virus because of the small likelihood of a lethal breakout. The medical community has determined that the outcome is generally good for babies delivered by asymptomatic parents. "As long as they are not having any symptoms—including prodromal symptoms like burning or tingling—it is not going to affect their mode of delivery," Dr. Chhutani elaborates. "As long as they are not feeling any symptoms and there are no visible lesions, then we can proceed with a vaginal delivery."

The problem? This places the impetus for proper preventative care, and the safety of the child, solely on the patient. Unless they disclose their herpes status, the care provider will operate under the assumption that they don't have the virus.

Knowledge is power, and in this case, safety. For those of us who know we have herpes and become pregnant, our prognosis is generally good. Transmission rates are extremely low—for a woman who has had recurrent outbreaks of the virus prior to pregnancy and is asymptomatic at birth, the risk of fetal infection is just 0.02-0.05 percent. To help reduce this possibility, providers will often prescribe an antiviral—like acyclovir (Zovirax), famciclovir (Famvir), or valacyclovir (Valtrex)—at 36 weeks of pregnancy, to be taken until delivery, for patients not already on one.

Bottom line: As long as there are no symptoms going into labor, vaginal delivery is perfectly safe. I know this from experience. I was able to have a successful vaginal delivery and avoid transmitting herpes to my daughter, despite having symptoms for most of my pregnancy. Eventually, my provider and I were able to find a dosage of valacyclovir that kept my outbreaks at bay and I had no symptoms when I went into labor.

I'm now pregnant with my second child. At least, this time, I know what to expect.

This content is created and maintained by a third party, and imported onto this page to help users provide their email addresses. You may be able to find more information about this and similar content at piano.io
Advertisement - Continue Reading Below
More From Hottest Sex Tips for Women
The Sexiest TV Scenes of All Time
The All-Time Best Vibrators, Reviewed by Experts
Advertisement - Continue Reading Below
Real Women Share Their Favorite Sex Positions
Behold: A Sex Playlist That Won't Make You Cringe
20 Ways to Be a Better Kisser

10 Unfiltered Sex Tips for the Best Action Ever