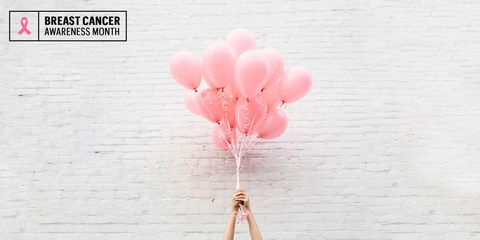 The first thing you need to know about Stacy is that she is and always was very breast-proud. When she was about 11 years old and her chest began to grow larger than the other girls, her cousin remembers how she would tower over her saying, "Who's the boss? I'm the boss!" as she dug her thumbs to her chest and jutted it out. In her college years, Stacy was known to incorporate similar moves into dance parties.

I learned all of this as I sat in a circle surrounded by a dozen of her closest friends, all women in their 30s: the best friend from high school, the cousin, the art school gang from college, and me—someone who had come to know and love Stacy in my turbulent 20s. We were gathered in a cabin in North Lake Tahoe for three days just weeks before she would go under the knife for a double mastectomy to prevent breast cancer.

"I wondered if parties like ours would become the new norm, like bachelorette parties or bridal showers."

As I stared up at pink balloons with drawn-on nipples, I wondered if it was ludicrous to willingly have your breasts removed even though you did not have cancer. But after losing her mother to breast cancer, and seeing her sister go through the procedure after doctors did find cancer cells, Stacy knew it was the right thing to do. And like her sister before her, she was throwing a party to send her breasts off. (Even a deer head mounted on the wall was not safe from donning its own set of knockers for the weekend.)

"Remember when you dared me to put my boobs on a Richard Serra sculpture outside the LACMA?" said Jessica, Stacy's friend from college. "You took your top off and put 'em against the metal, and you were like, 'take that, big macho metalwork!'" We had begun the first of many planned activities for our weekend trip—sharing memories of Stacy and her at times hilarious relationship with her breasts.

But this party would be different from other get-togethers. Stacy needed to feel strong and healthy, and wanted to stop drinking alcohol (doctors warned her that she would not be able to drink for months after the procedure). So we made kombucha cocktails and collaborated on group meals. One night we had a taco bar. On another, a Buddha bowl bar. Pinterest was invented to plan parties like these.

It kind of felt like a coven—if covens enjoyed concocting green juices and doing yoga while listening to Tori Amos and riot grrrl. We even joined hands one night around a fire and read poetry—Maya Angelou, Adrienne Rich. We almost read a nurse's moving note to her patient, but it was too emotional for Stacy, so she just burned it instead.

Our celebration may have been unique, but Stacy's brush with cancer was not.

As more and more women start coming to terms with the realities of cancer, I wondered if parties like ours—in some form or fashion—would become the new norm, like bachelorette parties or bridal showers. A marker for American women at a critical time in their lives. A milestone.

"She was 26 at the time and in great health. To be told that she may need to have her breasts removed seemed unreal to her."

Ten years ago, Stacy's mother was diagnosed with Stage 3 Invasive Breast Cancer (IBC). Stacy was deemed "high risk" due to her family history—her grandmother, aunts, and cousins had also all developed breast cancer. Her options were to have a prophylactic mastectomy, a surgical procedure to remove one or both breasts at no cost, or receive yearly screenings for breast cancer that included MRIs, mammograms, and ultrasounds.

Stacy was, initially, unwilling to accept this news. She was 26 at the time and in great health. She enjoyed hiking and the outdoors, and living off a mostly vegetarian diet. To be told that she may need to have her breasts removed seemed unreal to her. But time passed and the severity of the situation became unavoidable. Six years later, Stacy lost her mother to breast cancer. A year after that, doctors found cancer cells in her sister's breast tissue. She then faced a devastating new reality for herself. But times were also changing—there was a growing awareness of options available to women in Stacy's exact situation.

It was no minor gesture when Angelina Jolie wrote an opinion piece inthe New York Times in 2013 about her decision to have a proactive double mastectomy. And more recently, the world was introduced to breast cancer survivor Paulette Leaphart in Beyonce's Lemonade, where Leaphart appeared topless with two scars where her breasts once were.

In our cabin sanctuary, surrounded by friends, Stacy's farewell party to her breasts felt right in step with this new climate.

And there was a trickle-down effect. In between dancing, making jokes, and throwing a cake shaped like a boob in Stacy's face, we also talked about our own ongoing health issues.

From a friend who had just given birth to a healthy baby boy, I learned what it was like to have an abortion as a scared college student. From one of Stacy's coworkers, a breast cancer survivor, I found out what it meant to break the chain of cancer that had linked her mother, her aunt, and her grandmother. For many of us, this may have been the only time in our lives when we would feel comfortable talking openly about our bodies and our health—something as women, I realized, we seldom do.

Only here could we diffuse Stacy's fears to create what she called "sweet little moments of protection."

On our last night, as we sat around with our mocktails singing Tori Amos's "Silent All These Years," the song took on a whole new meaning. As Stacy began to cry, some of us also cried—then laughed at ourselves for crying. But all of us left the next day feeling stronger.

Advertisement - Continue Reading Below
More From Health & Fitness
How to Be More Spiritual in 2020
Sleep Supplements for Sweeter Dreams
Advertisement - Continue Reading Below
31 Must-Have Workout Apps for Women
Are New Year's Resolutions Still a Thing?
Gifts That Will Delight and Destress
Products Every New Mom Will Love
Found: The Best Running Sneakers
Debunking the Dangerous Hymen Myth
The Virginity Testing Crisis
Carpe Diem? YOLO? Here's What a Shrink Has to Say