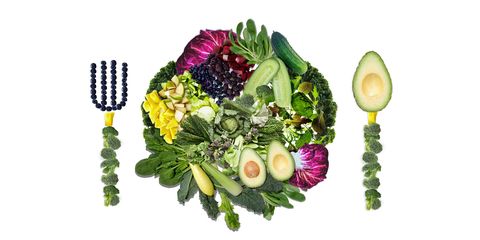 When I go missing in the wee hours a Friday night, my squad is unfazed. Not because they're crappy friends, but because they know me far too well. They'll most likely find me downing falafel at Mamoun's, spooning borscht at Veselka, or microwaving leftover pho back home. And this insatiable love of food is not limited to fourth meals—nothing gives me greater joy than cooking for friends, and landing coveted restaurant rezzie. I am constantly ravenous, and I've accepted it.

That being said, I also really do enjoy eating healthy. My lunches are typically low-carb and veggie-based, and I substitute vegan ingredients while cooking when possible. My BFF even got me a dehydrator for Christmas (prior to us frying up goat cheese and pairing it with the 2011 Brunello I gave her in return). #Friendsmas.

However, on the occasions that I've tried to hardcore cleanse (no sugar, carbs, or coffee), I find myself binge eating at night due to itty-bitty portions and a lack of protein during the day. I've only tried a full-on juice cleanse once in my life, and with every meal missed, I grew edgier and edgier until I was full on hangry with a killer migraine that only made things worse. By nightfall, I'd given up and ordered enough sushi for three (with brown rice, don't judge). Philly rolls > going to bed starving.

The vegan cleanse, comprised of organic cold-pressed juices, smoothies, meals, and snacks, was referred to me by the company's catering coordinator and friend of mine, Lipsa Shah. Geared towards those living active lifestyles, the menu was created to make clean eating easy for those working long hours with satisfying breakfasts, light lunches, tasty snacks, and nourishing dinners with zero meal prep. Though JP doesn't believe in counting, each daily menu sits between 1400 and 1520 calories. And did I mention it's Gigi-and-Kendall-approved?

After researching the brand's fruit-centric ideologies (which its founders believe is the secret to a stronger immune system and safe detoxification), I decided to put the plan to the test to see if it was 1) tasty enough to keep me from cheating and 2) filling enough to stop me from caving in to Seamless come bedtime. The five-day option interfered with a social engagement, so I decided to try three.

Two bags of bottles and roughage (plant material that's indigestible and acts as fiber) are delivered to my desk. I check out my spread, and spring for the Coffee Almond Latte—a cold brew inclusive option I added while customizing my menu. Something I already liked about this cleanse? Caffeine was not a dirty word.

After my first juice, I dug into the Truffle Green Protein salad. This was surprisingly satisfying (truffle dressing, I love you) and I had no desire to run to Hale and Hearty for a supplemental snack. More juice keeps me satiated until dinnertime, and I'm pumped to dig into the Raw Ravioli. (Yes, I know I need a manicure.)

While these aren't fooling ANYONE into thinking they're at their nonna's Sunday dinner—the "shell" is made from turnip and the basil cashew cheese inside is a far cry from my beloved ricotta—they're flavorful and filling. The arugula underneath is a bit tough to take down, but the tahini dressing helps negate the metallic taste. Since the dinner soup wasn't suitable for on-the-go, I trekked home through NYC's surprise monsoon, and ate the Egyptian Lentil in my bathrobe. I went to bed without any cravings for my typical midnight Cheddar-and-crackers snack and I'm, dare I say it, full?

My face was significantly less puffy than it was the morning prior. This could've been the Bud Light from Sunday Funday finally vacating my undereyes (post-shower lymphatic drainage massage FTW) or the influx of nutrients. I'm choosing to believe it's the latter.

My beloved and I on our honeymoon.

Due to the unavailability of some items, I decide to switch Day 2 and Day 3's menus so I could follow the plan as closely as possible. It was then that I fell in love with the Clean Green Protein smoothie, which was creamy with banana and hemp seeds.

Between this and the Roasted Vegetable Salad (delicious), I could feel my organs absolving me for those quesadillas (and the tacos...and the fries) on Saturday night.

Obvious observation: There is A LOT of juice involved. So much, in fact, that I found myself chugging them so I could move on to the next one on time. Not only was I not hungry, but I was struggling to finish everything in the fridge­, which was both a miracle and a curse. My need for coffee had also evaporated.

Having ingested a farmers market's worth of fruit juice over the past 36 hours, I was on a steady sugar high with no end in sight. And though conditioned all my life to believe this super dose of sweetness was a detriment to the body, I read up on JP's case for giving fructose a chance due to its positive effects when combined with starchy greens and vegetable matter.

At the end of the work day, my Marinated Kale Salad held me over while I took a cab from the office and I'd never been so excited to see avocado. It reminds me of cheese, which I'd begun to pine for like a lost lover. I ALMOST cracked by opening the cabernet in my fridge, but I resisted and finished half my Butternut Squash and Quinoa Soup instead. I was a machine.

At that time of the month, I'd typically be a hot, bloated mess. But the morning of Day 3, I was feeling tough as can be and my PMS headache was mysteriously absent. I stepped on the scale and had only lost a pound, though it felt like five. The raw oatmeal subbed in from Day 1 was a delight and the Mini Glo I washed it down with was bottled sunshine.

I never thought I'd say this, but guys...it may have been too much food. I downed more juice, including my absolute favorite, Lucky Seven (BEETS 4EVER), and ended up at Penn Station with zero appetite. I breezed by Magnolia Bakery and passed on the limited-edition peanut butter banana pudding (a herculean feat) and didn't even glance at Shake Shack. I waited for the next train and sipped my Love at First Sight juice with only my Mushroom Lentil Chili left in my bag. It looks like dog food, I know, but it was the closest thing I'd had to meat in three days, so it was glorious regardless.

Following my foray into veganism, I was tired once again—possibly from the inevitable crash after three days of juicing. Though, my skin looked glowier and my Rag and Bone skinnies were definitely less restricting. I wish I could say I kept up my healthy habits for at least a day post-cleanse, but I was called back to the dark side at Buvette by way of toasty bread, crème fraiche, and a whole milk latte. It was worth it.

No #SadDeskLunch. Being MC's beauty and health assistant means desk lunches galore, so my options are often limited to what I can grab from the Hearst café. This plan removed any decision fatigue or chances of giving in at the ramen bar— I could just grab my next meal and go.

Custom Errrthang. Celery is cultivated in Hell (alternative facts?) and JP made it easy to eat around it. If you're not down with some of the grassier green juices or vegan cheeses, the brand works with you to find alternatives.

You will NOT be hungry... at all. Because I was constantly taking in calories, I never thought about my next fix. In addition to the quantity of food, the substance of healthy fats, like seeds and almond butter, spread throughout the day's meals curbed my cravings and kept me fuller longer. I could barely finish some of the smoothies and heavier soups, which is unheard of for me, but exactly what I was looking for: a reset without the hanger.

It's not the cheapest solution, but it tastes pretty damn good. With some plans out there approaching $500+, this is far from the bougie-est clean eating diet. While most New Yorkers would cringe at the idea of spending this much money on salad every day, if you're looking for a no-nonsense way to clean house, this is a decent—and appetizing—option.

A fridge is a must at all times. This may seem like a minor complaint, but because the juices are so fresh, they must be refrigerated to remain drinkable. This was difficult when I was bustling from the office to events to home, but a simple solution for my next go-round? Ice packs are a busy girl's best friend.

This isn't a long-term effort. As much as I enjoyed the meals, this would be difficult to maintain for longer than the suggested five days, especially since I'm not typically vegan. Mindful eating is important, but cheese is forever.

The Juice Press Clean Eating Program is available in select cities from $58 at juicepress.com.