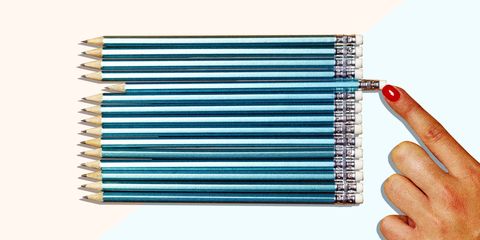 There it was in the middle of my Facebook feed, between baby announcements and political rants: A post from a friend on spring cleaning and the way she is "SO OCD" about just exactly how clean her house is.

"This shit again?" I thought.

And then I sighed. Of course it's this shit again. Every Christmas, friends and colleagues one-up each other with how OCD they are about gift-wrapping or decorating the tree just so. Every spring, it's practically OCD season as people who do not actually have obsessive-compulsive disorder reorganize their closet and then bandy about a legitimate mental illness as though a punchline.

I have been diagnosed with clinical obsessive compulsive disorder. I'm here to tell you it's not a joke.

Still fuming from seeing that update, I did a little social media search. I wish that I could say I was surprised to see how lightly a debilitating condition is taken, but I wasn't; and it sucked. A few of the gems in my feed:

Living room is looking much better! I love a clean house! #soOCD

My socks are all matched up and this makes me so happy! #soOCD

If my car's not clean, I freak out! {cry-laugh emoji} #soOCD

My kiddo {insert photo here}, practicing her coloring but mad she got marker on her clothes #soOCD

"I have been diagnosed with clinical obsessive compulsive disorder. I'm here to tell you it's not a joke."

Twitter is worse. It seems that being #SoOCD is something of a trendy existential epidemic in the branding and marketing arena. I'm looking at you OCD Agency. Your tagline: "We are OCD. And Yes, We Are Obsessive About What We Do" is catchy. But it's also incredibly insensitive.

I click back over to Facebook. The replies are rolling in on the spring cleaning update. I watch as my friends light up the notifications on my iPhone with cry-laugh emoji faces and commiserate with the plight of the original poster. Everybody's laughing and no one is realizing why they shouldn't be.

I used to be you. I used to crack wise about how OCD I was—in reality, I was just being particular. There were plenty of family disagreements that stemmed from my compulsion to research every.single.thing before making a change to my toddler daughter's diet. "I'm just OCD," I'd tell my husband. But I wasn't. Hypervigilant? Yes. Anxious new mother? Certainly. But OCD?

Nope. Not even close.

"A person can obsess and worry without it being a disorder," says Bill Prasad, a licensed professional counselor in Texas. The diagnosis only comes when those obsessions and compulsions impair your ability to function properly in relationships, social settings, or the workplace.

Like so many lessons we learn in life, I didn't figure this out until I realized I was on the other side of the equation—and had been for a very long time. I have dermitillomania, otherwise known as obsessive-compulsive skin-picking, which falls under the subset of Body-Focused Repetitive Disorders, or BFRD.

I'm not trying to be cute or self-deprecating. I do not log into social media to humblebrag about how I'm #SoOCD that I must cover my arms and wear a low brimmed hat because people stare and little kids point.

I have always picked at my skin, but I did it less when I was actively bulimic—the ritualistic binging and purging alleviated the panic that sat so heavy on my chest I could not breathe. When I was diagnosed, everything started making sense to me and I was l was livid for a short while that no one had picked up on it before. My therapist designated my little dog, Nibbler, as my emotional support animal after noticing that when I focus on him, I tend to leave my skin alone.

Claiming your love for organizing is a disease makes the actual disease more difficult to take seriously, to acknowledge, and to receive treatment for when sufferers attempt to seek help. When people joke about "being OCD" in real life or on social media, they are trivializing the experiences of those who are truly suffering.

"It's not a good idea to throw around a psychiatric diagnosis without thinking about it," Prasad says. "I hear people say 'I am so OCD' all of the time in lay life and my first response is, 'Actually, you probably aren't.'"

So, dear Facebook friends, take it from me and stop pretending you are #soOCD. And trust me when I say how much I hope you never truly are.