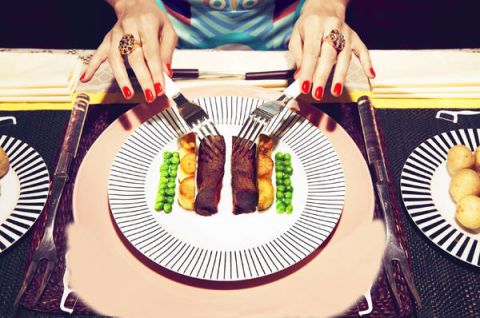 What it is: The Hapifork, $100 (hapi.com), has an electronic sensor that measures hand-to-mouth movements, then lets you know when you are eating too quickly.

Why: A meal isn't a race, and eating more slowly gives our brains and bodies time to register food intake so we don't overeat. In fact, research has shown that slower eaters tend to have lower body mass indexes than those who eat quickly.

Trail Run: I appreciate the taste and texture of food but apparently not enough, according to my Hapifork. I tested the utensil while eating a salad for lunch, and it lit up and vibrated whenver I placed food into my mouth too quicly-which was essentially every bite. I used to think that only adolescent boys scarfed down their meals at rapid-fire speed, but then I came to the unpleasant realization that I habitually shovel food into my mouth before barely finishing the previous forkful. Me, eating like a cavewoman! "Why didn't you tell me?" I wailed to my husband with the same fury I did the time he let me keep talking at a dinner party while I had spinach stuck between my teeth. He shrugged (probably because he chows down the same way).

The Verdict: By the end of lunch, I could tell I was eating more mindfully, resting between bites, chewing for a good 10 seconds, and even drinking water more often. But what has made the fork even more helpful is using it over time to track my eating habits via its Bluetooth connection to the Hapifork app. Based on the data collected, I am striving to make each meal last at least 20 minutes (which, at a healthy pace, equals about 60 forkfuls), as opposed to the mere seven minutes of my eye-opening first lunch. So far, I haven't lost weight, but I definitely find food more satisfying, in that I don't finish eating and immediately start fixating on what I'll snack on and then what my next meal will be. My only complaints? The gadget is most accurate when the concave side of the tines faces down (not my typical position). Also, I realized that I eat quite a lot of food requiring a spoon or my fingers. So until they come out with a Hapispoon, I'm on my own there.
This content is created and maintained by a third party, and imported onto this page to help users provide their email addresses. You may be able to find more information about this and similar content at piano.io
Advertisement - Continue Reading Below
More From Health & Fitness
Considering Changing Up Your BC? Read This First.
Created for From Marie Claire for Created by Marie Claire for
Twirla
Texas DV Shelter Destroyed by the Winter Storm
Advertisement - Continue Reading Below
What We Know About the B.1.1.7 Variant
The “Invisible Disability” You’ve Never Heard Of
Why I Got the COVID Vaccine at 32 Weeks Pregnant
Power Pick: SoulCycle's At-Home Bike
Yes, You Should Be Taking a Probiotic Every Day
The Best Workout Apps for Women Who Want Results
Pilates Mats for Crushing Your Fitness Goals With
Our Favorite Yoga Apps for Beginners