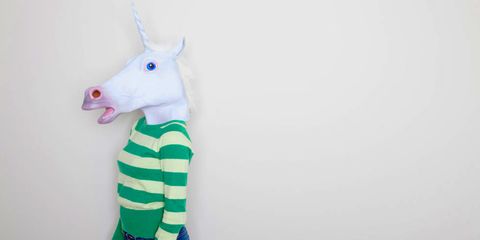 Add to the list of things you could totally have and never know about: a unicorn uterus. In legit medical speak, a "unicornuate uterus" is when the Mullerian ducts (the things that develop and fuse when you're an embryo to form your uterus, two fallopian tubes, and two ovaries) don't form correctly—with one duct creating a mini uterus. In normal speak: Because only half of the ducts formed correctly, your uterus is smaller. Essentially, it looks like a little banana—and could cause major problems down the road.

"It happens to one in 4,000 women," says Dr. Kecia Gaither, maternal fetal medicine specialist and director of perinatal outreach at Montefiore Health System. "You typically wouldn't know if you have one, because you still get your period and everything else is fine."

Scary. Even scarier? "It would really only come up if a woman had miscarriages, when her doctor would try to figure out what's going on," Dr. Gaither explains.

Besides miscarriages, women with unicorn uteri are predisposed to having other pregnancy complications including having premature babies, small babies, breech presentations (when the baby can't move correctly in the uterus), and—because of that—a higher C-section rate.

The other way you might discover you have one? Kidney problems. "If you're often having urinary tract infections and/or kidney problems, a light might go on for the doc," says Dr. Gaither, who says an ultrasound would allow them to diagnose you.

Oh, and randomly, hearing problems can be a clue you have this issue. Nope, no one else can explain it either. (It's one of those medical mystery things.)

The good news/bad news: You can't really do anything about it. Dr. Gaither recommends seeking out a doctor if you have had miscarriages. "Ask them, 'Is my uterus normal?'" she says.

And if you find out it isn't, Dr. Gaither explains that it isn't the end of the world—it just means that if you *do* get pregnant, you'll spend a little more time at the doctor's office. "You'll have to tell all your doctors, and you should have your kidneys evaluated," she says. "And during the course of pregnancy, you'll need frequent growth scans, and towards the end of pregnancy, they'll need to figure out what position the baby is in to see if it's breech."

Until then? Eh, you're good.