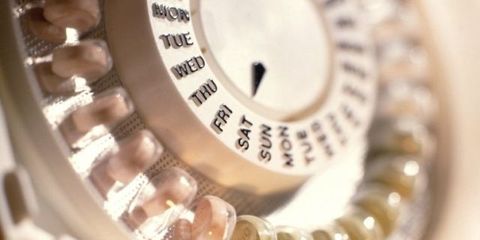 According to the New York Times, the women were between the ages of 15 and 34, and were tracked over the course of 13 years between 2000 and 2013. After six months of being on hormonal contraception, scientists found a 40 percent increased risk of developing depression compared to people who weren't on hormonal birth control.

Some birth control options came with a greater risk than others—women on progestin-only contraception like the Depo shot and the mini-pill more than doubled their risk of developing depression, and women with the Mirena IUD more than tripled their risk of depression. Researchers also found that the risk for developing depression was higher for teen girls than adult women, but that could be teen girls are generally more susceptible to depression.

While Oejvind Lidegaard—a senior author from the study, which was published in full in JAMA—told the Times that most women who take hormonal birth control won't develop depression, a 40 percent increased risk of depression "is not trivial." Previous research has already found that women are twice as likely to develop depression than men, and the added risk associated with hormonal birth control doesn't help.

"It is important that we tell women that there is this possibility," Lidegaard told the Times. "And there are effective nonhormonal methods of birth control."

This content is created and maintained by a third party, and imported onto this page to help users provide their email addresses. You may be able to find more information about this and similar content at piano.io
Advertisement - Continue Reading Below
More From Health & Fitness
The Ultimate Smart Water Bottle Is On Sale
Bala's Ankle Weights Are Finally On Sale
Advertisement - Continue Reading Below
CeCe Telfer Has Already Made History
How to Help People in India amid COVID-19 Surge
I Have 'Triblings'—3 Babies Born 7 Weeks Apart
Dear Survivor: You Are Enough by Merely Existing
Tarana Burke to Assault Survivors: Hold On to Hope
Eco-Anxiety Is Manifesting More in New Moms
Exclusive: New Teleabortion Service Launches
Stress-Relieving Gifts That Will Put You at Ease