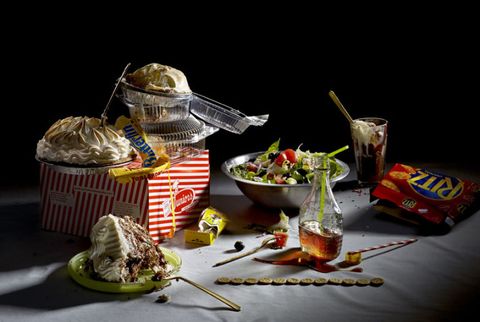 It was 2 A.M. and I'd had "dinner" four hours earlier: a Greek salad, two slices of lemon meringue pie, a piece of carrot cake, and a brownie sundae. But an overwhelming sense of anxiety — over my career, my relationship, and even my dirty apartment — prevented me from just going to sleep, and I was hungry. I'd already thrown away all my "danger foods," like Ritz crackers and chocolate chips, and returning to the nearby 24-hour grocery store was out of the question: I couldn't face the clerks as I paid for cookies and fudge sauce for the second time that day. The only way out was a tactic I'd tried before: I reached for the brown sugar, olive oil, flour, and cocoa powder. After pouring them into a bowl and mixing with a fork, I started eating. As the grainy mixture slid down my throat, a familiar numbness set in. I went back for more.

My relationship with food had taken a wrong turn when I was 9, the summer my family moved to a new state. I knew no one. Faced with long, friendless days, I'd sneak into our pantry for a box of Golden Grahams, tiptoe away, and shovel down handful after handful alone in my bedroom. Over the years, to keep my weight under control from the frequent binges, I learned to fast for days at a time. I even experimented with ipecac syrup, a medicine used to induce vomiting, to make myself throw up in high school — a trick I learned after researching eating disorders for junior high book reports. But by the end of college, when I hadn't purged for a few years, I assumed I'd grown out of it.

So when my aberrant eating habits returned — I was 29, living and working in New York City — I just thought I was being healthy. I'd ended a bad relationship and started a macrobiotic diet to jump-start my new life. I became a gym rat, and within a few months I'd lost 30 pounds — but at 5'7" and 132 pounds, I was still in the "normal" BMI range. And I was happy, meeting men who treated me better than my ex ever did. Slowly, as I shopped for ever-smaller clothes and friends complimented my new look, I adopted other odd eating habits, doing endless calorie calculations, superstitiously refusing carbs three days before a date, and inhaling coffee and cigarettes to quell my chronic low-level hunger. To manage my cravings for baked goods, I resorted to an old high school strategy: chewing food and spitting it out instead of swallowing. It wasn't an eating disorder, I thought, just a reward — a way to get the sugar I craved for "free." I knew this wasn't normal, but in a city where people talk nonchalantly about getting colon cleanses, my behavior didn't feel that strange. Everyone around me commented on how "good" I was, with my salads and carrots. Only once did anyone question my habits — a friend who'd been hospitalized for bulimia and recognized my eating as troublesome. "What's up with your weird eating?" she asked bluntly. I blew off the question. And my main physical symptoms — dizzy spells, anemia — I blamed on stress.

When the company I was working for went belly-up, this precarious balance crumbled. During the day, I limited myself to small meals: a half-cup of nonfat yogurt with five almonds and four prunes for breakfast, a plain green salad with fat-free tuna salad for lunch. But after dark, about four times a week, I'd change into elastic-waist pajama pants and indulge in hours-long bouts of eating, inhaling candy bars and cookies dipped in Nutella, washing them down with maple syrup straight from the bottle. I fell into a trancelike state as I ate, and the sluggishness brought on from ingesting thousands of calories in one sitting kept my nerves off their usual high-wire. I tried purging a few times, but it destroyed the tranquility I felt after a binge, and eventually I stopped trying.

I gained 15 pounds in six months. Food was always on my mind; I canceled social plans to stay in and eat. I felt paralyzed by big life decisions: Should I change careers? Leave New York entirely? What about my boyfriend? Our relationship suffered. I'd spend weekends at his apartment, but by Sunday afternoon I couldn't focus on anything he said, craving a binge so badly that I literally shook. "You're checked out all the time," he'd say. It was a fair accusation, since I was usually either starving or recovering from an eating session. The minute we'd part ways, I'd run to the grocery store, then go home and gorge.

Then, a year after I'd been laid off, I stumbled across the blog of an old friend. Unbeknownst to me, she'd been a binge eater and was writing about having been successfully treated. When I read about how she used to drink maple syrup straight from the jug, I felt a jolt of recognition — that's me. Then it dawned on me: She got help. Her blog listed the phone number of the Renfrew Center, a leading eating-disorder clinic that was a half-hour from my apartment. I called the next morning, went in for an assessment the day after, and started their intensive outpatient program two weeks later. At my first meeting with my nutritionist, she pulled out a list of meal "exchanges," explaining that my breakfast allotment of one dairy exchange, two starches, one fat, and one fruit might translate to a cup of yogurt, two slices of bread with a teaspoon of butter, and a cup of berries. I interrupted her. "I don't need help with meal planning. My bingeing is the problem."

She didn't blink. "How many calories a day do you think you're eating, aside from the binges?"

"Try half that," she replied. For a confused moment, I thought she was praising me. Then I realized she was saying I was malnourished, eating fewer calories than would be appropriate for a 3-year-old. As she went on, explaining that she suspected hunger of provoking my binges, my stomach seized and tears pricked my eyes. I was ashamed to realize that what I thought I'd been doing right all along was actually part of the problem. And how was I going to eat two slices of buttered toast in the morning or croutons with my salad? I'd worked so hard to eliminate those foods.

"You have an eating disorder," she concluded gently. But my exact diagnosis — eating disorder not otherwise specified, or EDNOS — made me feel like a failure. Instead of being the perfect binge eater or model anorexic, I was just a weird collection of habits. In treatment, though, those habits — my child-size portions, chewing and spitting, and superstitions about food — added up to one thing: I didn't know how to eat. I needed to learn.

For six weeks, the nutritionist, a number of counselors, an art therapist, and my small-group therapy sessions helped me do just that. I spent 12 hours a week at the Renfrew Center, telling only a few close friends and my boyfriend — who was incredibly supportive — about my treatment. I learned that EDNOS accounts for three-quarters of all diagnosed eating disorders; it's more common than anorexia or bulimia, and its 5.2 percent mortality rate is higher than theirs. Even people who fit the colloquial definition of anorexic or bulimic might not receive those diagnoses: To be medically bulimic, a patient must purge twice a week for three months. Anything less and she's got EDNOS.

In the long run, though, my unsatisfying diagnosis has helped me heal by forcing me to examine my behavior more deeply. When you genuinely don't know if tearing the crusts off your sandwich is a preference or a symptom, you can't cling to a predetermined checklist of behaviors to figure it out. In order to get better, I had to tune in to a voice I'd been muting since I snuck that first box of cereal: the voice that wanted me to acknowledge how I was feeling.

I'm 35 now, and it's been two years since I left treatment. Nearly everything is more stable in my life, including my relationship with my boyfriend, the same guy I was seeing at the height of my disorder. (I'm a far better girlfriend when I'm not cranky from living on coffee and nonfat yogurt.) Although my weight is steady at 148 pounds, I'm still sometimes tempted to restrict and binge. But now I recognize that urge as a sign that something's awry, and instead of reaching for the numbness of my eating disorder, I grab my treatment "feelings chart." It lists a wide range of emotions, from happy and sad to irritated and frustrated. As I scan it, looking for the word that suits my mood, it reminds me that feelings are only feelings. They can hurt — painfully so — but they will not swallow me. And I will not swallow them.

Advertisement - Continue Reading Below
More From Health & Fitness
How to Build a Mini Gym at Home
Can't Find a Good Online Workout Class? We Gotchu
Advertisement - Continue Reading Below
What It's Like to Be a Doctor Fighting Coronavirus
The Best Workout Apps for Women Who Want Results
LVMH Perfume Factories to Produce Hand Sanitizer
Why Social Distancing Is So Important Right Now
I Tested Positive For the Coronavirus
What Staying Awake for 36 Hours Does to Your Face
The Mental Health Apps Professionals Recommend
How to Be More Spiritual in 2020