Let's face it: being a woman in the public eye means dealing with haters. But don’t let that scare you away! Just take it from Brianna Wu, a video-game developer who found herself at the center of Gamergate (a harassment-fueled digital campaign against women in the video-game industry)—and a 2018 candidate for the U.S. House of Representatives for Massachusetts’ 8th District.

“I have tried everything you could possibly do! I have tried telling them to go f*ck themselves, ignoring them, reasoning with them—the only thing that doesn’t do anything destructive is to block them. Women are socialized to put up with a lot of bullshit. And there are a lot of men who feel entitled to our time and attention, and when they feel angry at us, they feel entitled to make us feel that. I hate the phrase ‘Don’t feed the trolls,’ because I think it’s tilted toward a very male understanding of the Internet, but there is no value in engaging with the trolls. Ground yourself psychologically. For me, I work out a lot. I’m also very cognizant about putting down Twitter and spending time with my family. Find things that let you touch base with your humanity.” 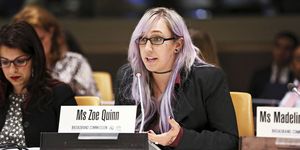 Kayla Webley Adler Deputy Editor Kayla Webley Adler is the Deputy Editor of ELLE magazine.
Jen Ortiz Deputy Editor, Cosmopolitan As deputy editor, Jen oversees Cosmopolitan's daily digital editorial operations, editing and writing features, essays, news, and other content, in addition to editing the magazine's cover stories, astrology pages, and more.
This content is created and maintained by a third party, and imported onto this page to help users provide their email addresses. You may be able to find more information about this and similar content at piano.io
Advertisement - Continue Reading Below
More From The Everything Guide to Running for Office
Nine Congresswomen on Why They Almost Didn't Run
The Women of Congress on Why They Ran for Office
Advertisement - Continue Reading Below
Nine Congresswomen on Why Women Should Run
The Reality of Life In Congress
Advice from the Women of Congress
How to Raise Money for Your Political Campaign
Social Media Tips for the Campaign Trail
How to Stay Sane on the Campaign Trail
How to Build Buzz for Your Campaign
How to Deal with Press on the Campaign Trail