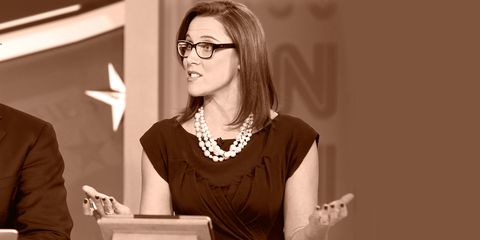 On June 26, as the nation was reacting to the Supreme Court ruling that effectively legalized same-sex marriages, conservative political commentator S.E. Cupp, 36, was at CNN's Washington, D.C., headquarters preparing to go on-air. When the camera cut to her, she was noticeably overcome with emotion from watching gay-marriage supporters celebrate the decision in front of the court. "These people are not pariahs," she said, with tears in her eyes. "They're patriots." She continued, daring members of her party, who she said would become relics if they don't shift their thinking on the issue, to "look at their faces…and ask yourselves if they deserve the same dignity that the rest of us get to enjoy." Here, Cupp discusses her viral moment.

Marie Claire: Why did you react that way?

S. E. Cupp: I was just a human being in that moment. I like to think I'm a pretty professional person, but it's hard to look at the faces of those families and not see the joy in their eyes and feel happy for them that they get to enjoy the life that many of us tend to take for granted.

MC: Have your differences with the party ever made you question your loyalty?

SEC: No, I am very secure in my beliefs. I'm pro-life, progun, for limited government and lower taxes. But I've always thought supporting gay marriage was, in fact, a deeply conservative thing to do. If we support marriage as economically stabling and socially empowering, why wouldn't we want more people to enter it?

MC: Does it concern you that many of the GOP candidates for president in 2016 issued statements opposing the ruling?

SEC: I'm not surprised—I don't expect hearts and minds to change overnight...Many Republicans have come out in the past couple of years in support of gay rights. Maybe it will take awhile to get to the presidential level—like it did in the Democratic Party—but I'm very encouraged.

MC: Has the party's position on marriage hurt its standing with young people?

SEC: Absolutely. I hear all the time from young people who say, "I would be conservative if it wasn't for gay marriage." They say, "I know too many gay people to be part of a party that thinks there's something wrong with them." I don't want my party to become obsolete, especially when we have so much to offer to young people.

MC: Do you worry about opposing your party in such vocal ways?

SEC: I enjoy challenging my party to think differently about things. There's always a little backlash, but I recover just fine. They haven't asked for my conservative card back yet!

Kayla Webley Adler Deputy Editor Kayla Webley Adler is the Deputy Editor of ELLE magazine.
This content is created and maintained by a third party, and imported onto this page to help users provide their email addresses. You may be able to find more information about this and similar content at piano.io
Advertisement - Continue Reading Below
More From Politics
How to Demand Justice for Adam Toledo
Daunte Wright's Death Sparks Protest in Minnesota
Advertisement - Continue Reading Below
41 Surprising Rules First Ladies Have to Follow
Asian American Women on Where to Go From Here
Syrian Journalists Reflect on a Decade of War
How to Show Your Support for the AAPI Community
Activist Lydia X. Z. Brown on Disability Justice
Elisa Crespo: "I'm Not Here to Make History"
What We Know About the Georgia Spa Shootings
Dianne Morales Has Never Listened to the Naysayers