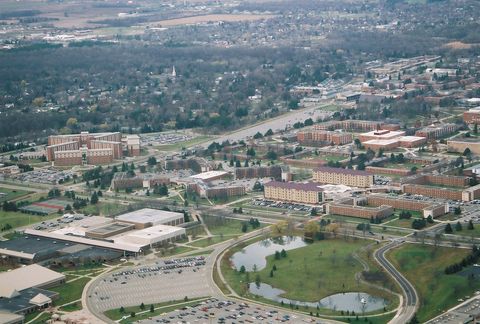 Survivors of the Majory Stoneman Douglas school shooting in Parkland, Florida, are outraged that yet another school shooting has occurred in the U.S.—less than three weeks after 17 people were killed on their campus.

Students-turned-activists Emma González, Jaclyn Corin, Sarah Chadwick, and others took to Twitter to express their anger and support for gun-reform upon learning of a shooting at Central Michigan University, which claimed the lives of at least two people Friday.

You know what matters here? People Keep Dying. Until Politicians care more about People than they do about Money, random and innocent People are going to Keep Dying. #VoteThemOut #NotOnOurWatch #WeCallBS

NO ONE CAN TELL ME THERE ISN’T A GUN PROBLEM IN OUR COUNTRY. TWO DEAD. HOW LONG WILL IT TAKE FOR LAWMAKERS TO LISTEN??? https://t.co/xJcFQe0uLp

HOW MANY MORE STUDENTS HAVE TO DIE BEFORE YOU REALIZE THERE IS A GUN ISSUE IN AMERICA? HOW MANY MORE?

HOW MANY MORE NEED TO HAPPEN BEFORE OUR LAWMAKERS GET OFF THEIR ASS AND DO SOMETHING. https://t.co/ljH2exPmq4

Innocent lives being taken away due to gun violence. When is enough, enough? https://t.co/g6sgFhr2QE

The MSD students have been very vocal about wanting U.S. politicians to reform the country's gun laws so that shootings will "never again" happen on school grounds.

After their own deadly school shooting, the students launched the Never Again online campaign and March for Our Lives, which is a demonstration set to take place on March 24 in Washington, D.C. to "demand that their lives and safety become a priority and that we end gun violence and mass shootings in our schools today."

A separate school walk-out organized by EMPOWER, the Woman's March youth branch, is scheduled to take place on March 14. It will begin at 10 a.m. in each time zone and last for 17 minutes—one for each victim who lost their life in the massacre. Parkland, Florida, is listed as one of the communities that will participate in the walk-out.

Women's March Youth EMPOWER is calling for students, teachers, and allies to take part in a #NationalSchoolWalkout for 17 minutes at 10am on March 14, 2018. Join us in saying #ENOUGH!https://t.co/8ZE8uthRlZ pic.twitter.com/45yCZl4zDm

Immediately following the Majory Stoneman Douglas shooting, some conservatives, including Tomi Lahren and Mark Dice, criticized the students for turning to social media during the crisis. "Someone want to tell the Generation Z kids that in the event of a school shooting, they should call 911 instead of posting video of it on Snapchat," Dice wrote in a now-deleted tweet.

However, the teens immediately responded to their critics, calling their remarks "ridiculous."

The fact that you think the first thing we did was go to Snapchat is ridiculous. 911 operators don’t need 4,500 calls for the same thing. At least one kid in each room called 911 and the rest talked to their parents https://t.co/cgC6tiLiV8

I was there. I heard the screams. I heard my classmates & friends screaming for help as he shot into their classrooms next to mine. I saw them lying there when police broke the door and ushered us out. It was a pain I had never hoped I’d have to experience or anyone to experience

A gun has killed 17 of my fellow classmates. A gun has traumatized my friends. My entire school, traumatized from this tragedy. This could have been prevented. Please stfu tomi https://t.co/qNo03ZE3Ev

Eileen Reslen I’m Eileen, the digital news reporter at Hearst Digital Media.
Advertisement - Continue Reading Below
More From Politics
Ayanna Pressley Wants Total Justice for Survivors
Jot Down These 2020 Voter Registration Deadlines
Advertisement - Continue Reading Below
What the ACLU Will Fight For in the Next 100 Years
Behind the Controversy at the Women's March
Women Are Not Granted Equality in the Constitution
Electability Is About Us—Not the Candidate
Everybody Running for President In 2020
Time’s Up for Wall Street
Women of Color Ruled Last Night's Debate
Cory Booker, Rosario Dawson Are Traveling Together