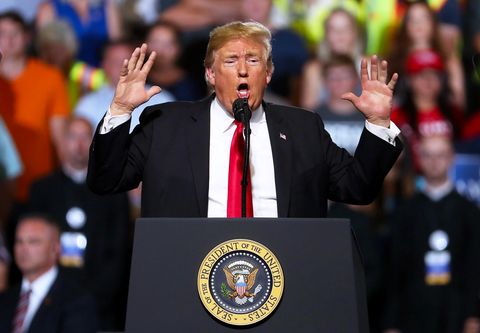 President Donald Trump made light of the #MeToo movement, a campaign that empowers women who have been victims of harassment and assault, while attacking Sen. Elizabeth Warren at a rally in Montana Thursday.

According to CNN, Trump visited the western state to try to deter constituents from re-electing Sen. Jon Tester, the Montana Democrat who criticized Trump's pick for secretary of veterans affairs. But during his speech, the President changed his target from Tester to Warren.

"I’m going to get one of those little kits, and in the middle of the debate, when she proclaims that she’s of Indian heritage because her mother says she has high cheekbones, we will take that little kit, but we have to do it gently because we’re in the Me Too generation, so we have to be very gentle," Trump added.

Trump suggests he would like to test Elizabeth Warren for Native American heritage, "but we have to do it gently because we're in the MeToo generation." pic.twitter.com/kgQ54Lxqbo

The kit Trump referred to is a DNA test meant to prove an individual's ancestry. According to Time, the President said, “I’ll give you a million dollars for your favorite charity, paid for by Trump, if you take the test and it shows you’re an Indian.”

Warren responded to Trump's remarks on Twitter saying, "While you obsess over my genes, your Admin is conducting DNA tests on little kids because you ripped them from their mamas & you are too incompetent to reunite them in time to meet a court order."

Hey, @realDonaldTrump: While you obsess over my genes, your Admin is conducting DNA tests on little kids because you ripped them from their mamas & you are too incompetent to reunite them in time to meet a court order. Maybe you should focus on fixing the lives you're destroying.

"Maybe you should focus on fixing the lives you're destroying," she added.

Eileen Reslen I’m Eileen, the digital news reporter at Hearst Digital Media.
This content is created and maintained by a third party, and imported onto this page to help users provide their email addresses. You may be able to find more information about this and similar content at piano.io
Advertisement - Continue Reading Below
More From Politics
Kristin Urquiza Wants Justice for COVID-19 Victims
A Breakdown of VP Harris's Net Worth
Advertisement - Continue Reading Below
WH Announces Removal of the Hyde Amendment
What Liberation Means This Juneteenth
Kathryn Garcia: It's Time to Step Up or Shut Up
A Valedictorian Speaks Out Against Abortion Bans
Standing Between Care and Violence
Seeking Healing a Century After the Tulsa Massacre
What to Know about Texas's Abortion "Trigger Ban"
A New Book Invites Us to Rethink Menstrual Equity