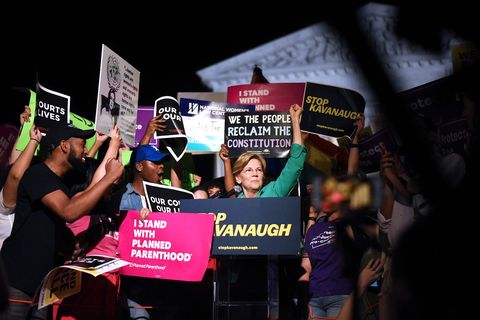 President Trump has nominated Judge Brett Kavanaugh to the Supreme Court, and one major reason why is clear: If he is appointed to the Court, Judge Kavanaugh will help overturn Roe v. Wade—the Supreme Court case that affirmed a woman’s constitutional right to make decisions about her own body.

Confidence is fairly high on this: Judge Kavanaugh was selected from a pre-approved list vetted by right-wing extremist groups that have made overturning Roe a key priority. Besides, President Trump didn’t try to hide the ball. He promised during the 2016 campaign that if he could appoint two or three justices, Roe would “automatically” be overturned. Candidate Trump doubled down on the point, explaining that women who sought abortions should be “punished.”

No one knows what Judge Kavanaugh has said to the people who put him on the pre-approved list, but his public record certainly demonstrates hostility towards contraception and abortion. In 2015, Judge Kavanaugh opposed a ruling to protect women’s access to birth control under the Affordable Care Act. And last year, when the Trump Administration tried to delay an undocumented teenager from accessing abortion services, Judge Kavanaugh sided with the Administration. He also praised former Chief Justice Rehnquist’s dissenting opinion in Roe v. Wade.

"Growing up in Oklahoma, we all heard the stories of women bleeding to death from illegal abortions."

President Trump’s hostility to women is no secret, and his selection of Judge Kavanaugh to join the Court is just the most recent in his long line of attacks on reproductive freedom. But this attack is particularly dangerous because as a Supreme Court Justice, Judge Kavanaugh would be able to affect policy for a lot longer than a four-year Presidential term. Judge Kavanaugh would be on the Court for the rest of his life, affecting Supreme Court decisions for decades to come. And he would replace Justice Anthony Kennedy—a crucial swing vote to protect Roe during his time on the Court.

The dangers posed by Judge Kavanaugh’s nomination are very real. Access to contraception is critical to women’s physical and economic wellbeing. Ninety-nine percent of U.S. women who have ever had sex—and by extension, their partners— between the ages of 15-44 have used birth control to treat health conditions, prevent infections, and preserve opportunities at jobs and school. Without contraception, women’s health and futures are at risk.

The threat of overturning Roe v. Wade is also serious. When abortions are illegal, women don’t stop getting them— they just risk their lives to do it. Today, thanks to Roe, getting an abortion is safer than getting your tonsils out. Before Roe v. Wade, many women turned to back-alley butchers to end their pregnancies.

When I was a girl growing up in Oklahoma, we all heard the stories of women bleeding to death and dying of infections from illegal abortions. Overturning Roe would put women’s lives at stake.

"This fight won’t be easy, but we’ve been here before."

A Justice who has been pre-screened for his commitment to take away a woman’s constitutional right to make her own decisions about her body does not belong on the Supreme Court in the 21st century. But here’s the thing—President Trump may have made his choice. But he is not a king. He can’t appoint someone to the Supreme Court without getting through the Senate first.

This fight won’t be easy, but we’ve been here before. In January 2017, millions of people across the country took a stand in one of the largest protests in world history. At the Women’s March, women (and friends of women) were loud and clear: A President who demeans women, mocks women, and attacks women would not keep them quiet.

America can’t go back to an era of back-alley abortions and can’t move into a future where reproductive rights are restricted. It’s time for Americans to raise their voices, flood the halls of the Senate, work the phone lines, and tell the President and the Senate: no to Judge Kavanaugh.