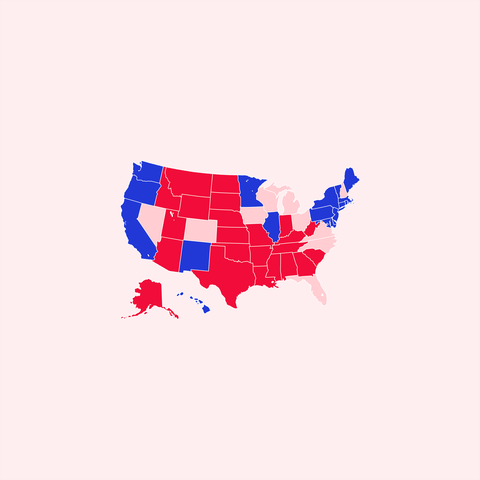 On Tuesday November 6, all 435 seats in the House of Representatives and 35 seats in the Senate are up for reelection, with experts forecasting that voter turnout among young people could sway which party controls both chambers of Congress. So if you haven’t been following any politics for the last year (perhaps on principle?), here are the Cliff’s Notes: It’s a big deal election with significant stakes.

The White House, House, and Senate are currently all controlled by the same party—the GOP—and history shows that one-party control tends to make for interesting midterm elections, especially if the sitting President has low approval ratings.

But voter turnout won’t happen without some major efforts—especially among those 70 million eligible voters between ages 18 and 35, a group that is becoming the largest voting bloc in the country. No matter what your political leanings, or how blue or red your state is, nearly every person can make a difference in an election. Even if you’re certain you know the outcome, people can be wrong (see: Media 2016). And other states and districts may be more competitive than your own. Sure, donations help, but even more than that, turning out the vote matters. Here are the things you can do to make a difference no matter where you live this November.

Yes, you. Get registered—many states’ voter registrations deadlines come up in October. Check and make sure you’re registered to vote here. Vote early if your state offers it; life happens and election day lines can be long. Twenty-seven states and D.C. now offer no-excuse absentee voting. And don’t just vote the familiar House and Senate races, be sure to vote down-ballot, too, for the vital but lesser-known positions like school board or county offices.

Consider lending your efforts to a state legislative race or local ballot initiatives, which can often be decided by relatively slim voting margins. “These races often get overlooked because they often have less resources to get media attention or pay for TV ads—but that's where extra help could be the most beneficial!” says Sam Nitz, a Democratic campaign consultant and president of Asgard Strategies. Nitz says issues like redistricting, gun control, and LGBTQ rights are often decided by state offices, and extra help on these campaigns can have a big impact.

The most effective way to sway an election is to connect, face-to-face with voters. And the most effective way to do that—five times more effective than making phone calls, sending texts, or posting a “Go Vote!” status with flag emojis on Facebook— is to knock on doors. Just one in-person conversation had a profound effect on a voter’s decision to go to the polls, and such in-person conversations have been found to boost turnout by 20 percent. Campaigns call this canvassing, and if you don’t live in a competitive district, there are organizations that will help you find one nearby, organize (and sometimes pay for) your travel, and get you started knocking on doors. Adrienne Lever, the national political director of Swing Left, says the entire organization, which has half a million people connected to it, was set up to get enthused voters who lived in noncompetitive districts out to areas where their efforts could make a difference. And every single campaign expert interviewed for this article agrees: Knocking on doors is the most effective use of volunteer time.

Joshua M. Habursky, a GOP strategist and chairman of the Grassroots Professional Network, recommends finding a competitive campaign (a good list is here) and contacting the campaign you’re interested in directly. “If you really want to have an impact, going through an intermediary is not the way to go. If you’re reading the news, deciding you want to help someone in a tough race, call his campaign office and see where you best fit in with your skills,” he says.

(Or text, you can text.) Even if you live in a solid red or blue state or district, you can still make a difference without leaving your home. Sign up with either the DCCC or the RNCC to get a call-list of voters (with sample scripts) and you can begin a phone bank from the comfort of your home.

Making calls and knocking doors is much more fun with a friend in tow. A lot of people prefer to knock doors with a partner. Put the word out that you’re organizing a phone bank, taking a road trip to knock doors, or going to find an early voting place in your neighborhood.

Ashley Spillane, former president of Rock the Vote who currently runs the consulting firm Impactual, says people who used positive messaging to talk about voting stories had the most compelling arguments to get people to go out and vote. “Its a pro-democratic event we’re all participating in,” says Spillane. “Voting should be ‘this is really fun and an active way to be a U.S. citizen.’”

Spillane recommends the app “VoteWithMe,” which will go through your phone’s contacts and see who has voted in previous elections and who can use a reminder. Voting history is public information (showing who has voted, not whom or what was voted for) and it can be a nice reminder that your brother in Cleveland or great aunt in Phoenix missed the last midterm election (which are less popular than Presidential ones). At the very least, it’s a fascinating way to see who has a stellar voting record.

But don’t rely too much on social media, cautions Lever. “We end up staying in our echo chambers. One of the reasons that canvassing and knocking on doors is the most impactful thing you can do in the election is because it gets you out of that silo.”

It doesn’t matter how many Facebook likes you’re getting, what matters is connecting with actual voters outside your immediate orbit. And if you want your efforts to matter this year, it shouldn’t be too long of a trip to find a competitive race near you.

Related Story
Find The Candidate That Aligns With Your Values
Rebecca Gale Rebecca Gale is an award-winning journalist covering the nexus of politics and people in Washington, D.C.
This content is created and maintained by a third party, and imported onto this page to help users provide their email addresses. You may be able to find more information about this and similar content at piano.io
Advertisement - Continue Reading Below
More From The 2018 Midterm Elections
One Week Post-Midterms Here's What We Know
How Ilhan Omar's Speech Started Is Important
Advertisement - Continue Reading Below
You Should Get a Dog! A Retired Greyhound!
What the Election Results Mean for Abortion
Women Won Big on Tuesday. Now Let's Get to Work
Deb Haaland Will Rep Indigenous People Nationwide
The Greatest Feminist Wins of the Midterms
Gretchen Whitmer Is Ready for the Top Job
Every Celebrity Who Voted in the 2018 Midterms
30 Celebrities Who Have Endorsed Politicians