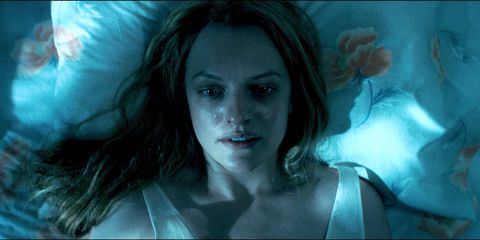 We're torn: We can't wait to watch Elisabeth Moss's performance in The Handmaid's Tale, Hulu's buzzy new series based on Margaret Atwood's dystopian novel of the same name that drops on April 26th. But then, just seeing the trailer (the final one was released yesterday, appropriately on "A Day Without A Woman") is a bit unnerving. Given the current political climate, its themes seem less and less like speculative fiction and more like real life.

If you haven't read The Handmaid's Tale since college (guilty), the book tells the story of Offred (played by Moss), a woman forced into sexual slavery after a group of ultra conservative, extremely religious white men take over the U.S. government and disenfranchise women, non-Protestants, gay people, and people of color. Offred is now a so-called handmaid required to sleep with Fred (the man who owns her), a married military commander whose wife is infertile. Her sole purpose is to produce a child. Abortion is illegal, and women are controlled by male leaders whose M.O. is to block women's autonomy over their own bodies.

Atwood wrote the novel in the 1980s, as the New Right—conservatives against abortion, the Equal Rights Amendment, and LGBTQ equality, to name a few things—became increasingly influential. Ronald Reagan gladly accepted the New Right's support to help him win the presidency, and in return, gave more political power to evangelicals, which helped energize the anti-abortion movement.

Perhaps prescient execs at Hulu decided 2017 was the year to adapt the modern classic after spotting similarities between the GOP of the 80s and today: President Trump campaigned on a largely pro-white, pro-male platform. He has surrounded himself mostly with like-minded white male conservatives, including Vice President Mike Pence, who while governor of Indiana, approved some of the most extreme abortion regulations in the country (which he signed into law "with a prayer"). And let's not forget Trump's chief strategist Steve Bannon, who as the head of Breitbart News published such articles as "Lesbian Bridezillas Bully Bridal Shop Owner Over Religious Beliefs." Here, a few other scary similarities:

1. Women are forced to have children whether they want them or not.

Although abortion is still legal in the U.S., (mostly white, mostly male) elected officials are making it ever harder for many women to obtain one. More than 300 restrictions on the procedure have been enacted at the state level since 2010, including mandatory waiting periods and in-person counseling sessions that can delay a woman's ability to have an abortion, potentially making the procedure more $$.

Then, in January, House Republicans voted to make permanent the Hyde Amendment, which prohibits taxpayer money from being used for abortion services. This hurts low-income women specifically. Not to mention that if Planned Parenthood is defunded, as Trumpcare stipulates, the government would cease to reimburse the organization for all services needed by all Medicaid patients, including STI testing, cancer screening, and family planning services.

It certainly doesn't help that the Trump administration has positioned itself squarely in the anti-abortion corner, with Pence speaking at the March for Life rally in January and Trump tweeting his support. "The message from the White House is that they are on a mission to overturn Roe v. Wade," said Andrea Miller, president of the National Institute for Reproductive Health, before Trump took office.

2. Abortion providers are targeted and killed.

Atwood imagines a society where abortion providers are hanged for crimes against the state. In real life, it was less than a year and a half ago that three people were shot and killed at a Planned Parenthood clinic in Colorado. Six years prior, anti-abortion extremist Scott Roeder killed George Tiller, MD, an abortion provider in Kansas. In total, there have been 84 incidents of extreme violence, including murders, bombings, and arson attacks, targeting providers and clinics in the last 20 years. Then there's the harassment. As David Cohen, co-author of Living in the Crosshairs: The Untold Stories of Anti-Abortion Terrorism, told ProPublica, "A lot of [abortion providers] deal with home picketing… It sends a not-so-subtle message: We know where you live, we know where to find your family, and maybe we'll do something more."

"I am very concerned about the impact that [Trump's opposition to abortion] could have on both healthcare providers that are already under attack for providing these services and women who are frequently punished and shamed for doing so," Miller said.

In The Handmaid's Tale, Offred is forced to have sex with her owner in order to produce a child. The idea that men are in control of women's wombs isn't so far-fetched: All those state bills limiting reproductive rights go through state legislatures (roughly 75 percent male, on average). Then the bills are signed into law by state governors—of which 46 are currently men. 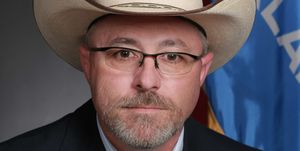 Here are two recent examples: In late January, Arkansas's Asa Hutchinson signed a bill criminalizing dilation and evacuation (aka "D&E"), a low risk procedure used to safely terminate a pregnancy after the first trimester. Not only does the bill effectively make it impossible for women to get an abortion after about 14-weeks, but it also states that a spouse, parent, or legal guardian of a woman who receives or attempts to receive a D&E can sue the provider. Then, in February, the Oklahoma House advanced a bill requiring a woman seeking an abortion to get written consent from the man who impregnated her. Rep Justin Humphrey defended the proposed legislation by saying that once a woman is pregnant, she's a "host."

Women are forbidden to read in The Handmaid's Tale. And so, by stripping women of their right to information, the men in Atwood's novel are able to maintain authority—if they can control women's minds, they can control their bodies. Currently in the U.S., 17 states require that women seeking an abortion undergo counseling that includes inaccurate and unsubstantiated information about a link between abortion and breast cancer, fetal pain, and/or negative psychological effects. Likewise, several states require that medically inaccurate handbooks be given or made available. In short: If women don't have reliable information about their reproductive health, it hurts their ability to choose their best course of action.

5. Women are stripped of economic independence.

Another way to control women: Limit their ability to earn. It's taken to the extreme in this story, with women denied jobs, education, and access to credit cards. Today, the discrimination is softer but not insubstantial. As of last year, the median income of women working full-time, year-round in the U.S. was just 79 percent of what men earned, according to the White House archives. That gap is even wider for women of color.

Here, there is some hope, though: In his speech to Congress last week, President Trump said his administration "wants to work...to make childcare accessible and affordable" and "to help ensure new parents have paid family leave." Both policy items are crucial to women's economic advancement. To really move the needle, POTUS will have to do better than the plan proposed during his campaign—one which benefits higher-earning families and leaves out adoptive parents and fathers.

6. Women's health is negatively impacted by pollution and STIs.

Many women in The Handmaid's Tale are left infertile after exposure to environmental toxins, as well as untreated STIs. While we may not be suffering from the aftermath of nuclear and biological warfare (and thank goodness for that), the Trump administration continues to deny climate change and STIs are on the rise.

On Trump's first day in office he eliminated any mention of global warming from the White House website. Then he announced Oklahoma attorney general Scott Pruitt as his pick to lead the Environmental Protection Agency. Pruitt, who has close ties with the fossil fuel industry, has already made moves to place climate skeptics at the top of the agency and roll back water regulations. Ignoring the environment can have serious consequences for people's health—asthma, cancer, heart disease, neurological disorders, and other conditions could all potentially become more prevalent as a result of climate change.

If that's not worrisome enough, the U.S. is already in the middle of a spike in STIs, partially as a result of budget cuts that caused clinic closures, according to the latest report by the Centers for Disease Control and Prevention (CDC). Women experienced a 27 percent hike in reported syphilis cases from 2014 to 2015, as well as increases in gonorrhea and chlamydia. Undiagnosed or untreated case can lead to infertility. Defunding Planned Parenthood, which provides STD testing to women and men would only leave more people without care.

It's no wonder that in an interview with Marie Claire, Moss pointed out that the cast of The Handmaid Tale has been noticing similarities between what they're acting out and what's happening in real life. "We occasionally will send articles to each other from that day's paper that exactly mirror what's happening in the show—whether it is reproductive rights, whether it's an environment issue, some new random crazy strain of virus," she said. "We are fascinated and horrified by the parallels." Us too.

An #internationalwomensday treat for you: The new @handmaidsonhulu teaser! https://t.co/IfklWcMzpx via @YouTube #HandmaidsTale