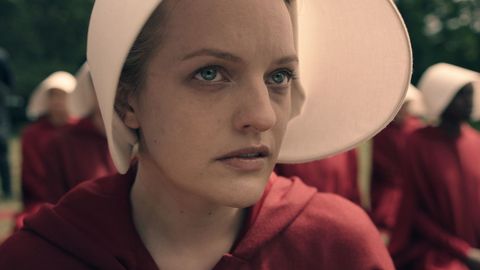 Hulu's chilling upcoming drama The Handmaid's Tale takes place in a dystopian alternative future, in which women's reproductive rights are controlled entirely by men. So, yeah. A little close to our actual reality.

The world of Margaret Atwood's celebrated 1985 novel is certainly heightened: after a sharp decline in fertility rates wreaks havoc on society, the United States is transformed into the Republic of Gilead, a military dictatorship where fertile women are kept as "Handmaids"—AKA sexual and reproductive slaves. You're not alone in thinking it doesn't feel much like speculative fiction right now—especially with an alleged sexual predator days away from becoming President, and a pro-lifer who would like women to hold funerals for their aborted fetuses stepping up as his VP.

Watching the pilot of The Handmaid's Tale is an oppressively unsettling experience in ways it would not have been prior to November 8, and according to Elisabeth Moss—who plays the show's protagonist Offred—that sense of unease crept into the atmosphere on set.

"It was definitely more emotional than I would have anticipated, and more close to home," Moss told MarieClaire.com and others at the TCA Press Tour. "I worked on the show the day after the election, and Joseph had a line from the book where he says 'Better never means better for everyone... It always means worse, for some.'"

"I just got chills talking about it," Moss continued. "It was very difficult to stand there and have him say that to me and play my reaction to that—which is obviously horror—and not feel something more than I think I would have felt otherwise.... Throughout production, we occasionally will send articles to each other from that day's paper that exactly mirror what's happening in the show—whether it is reproductive rights, whether it's an environment issue, some new random crazy strain of virus. We are fascinated and horrified by the parallels."

"If Gilead happened now, I would be a handmaid. That was something I latched onto from the beginning and found very affecting."

For Moss, the role felt closer to home than any she has played on television before; especially since Offred starts out as an ordinary woman living in modern America, forced to survive in an unthinkable new world order. "I would never be a copywriter in the 1960s, I would never be a detective in Australia—but if Gilead happened now, I would be a handmaid. That was something I latched onto from the beginning and found very affecting."

The Handmaid's Tale will premiere on Hulu on April 26.

Emma Dibdin Contributor Emma Dibdin writes about television, movies, and podcasts, with coverage including opinion essays, news posts, episodic reviews and in-depth interviews with creatives.
This content is created and maintained by a third party, and imported onto this page to help users provide their email addresses. You may be able to find more information about this and similar content at piano.io
Advertisement - Continue Reading Below
More From Culture
Fans Are Ready for Second Season of 'Bling Empire'
What We Know About Part 2 of 'Lupin'
Advertisement - Continue Reading Below
You *Need* to Follow the 'Bling Empire' Cast on IG
Watch the Trailer for the New 'Euphoria' Special
We've Getting a Season 2 of 'Bridgerton'
New Drama Movies That Promise to Move You
The Sexiest New Movies of the Year
A Look Back at Princess Anne's Life in Photos
Where Is the Cast of 'Gilmore Girls' Now?
'The Bachelor' Is Back!