Imagine going to a party where all of your friends are. It's an annual party, in the same location, and sometimes the same people are there, year after year and sometimes new people tag along. And every year, one friend is picked to not come to this awesome party and instead be sequestered away just in case something happens at the party. This is a real thing: I've just explained the practice of a designated survivor.

In this case, the party is the State of the Union address, the people in attendance are the members of the United States House of Representatives, and this year, that friend is Rick Perry, current Energy Secretary and former Dancing With The Stars alum. You can find an (incomplete) list of past designated survivors here.

Your designated survivor for the night pic.twitter.com/30GS3OVj2M

If you clicked on this thinking you were gonna get some information about Kiefer Sutherland, I'm sorry to have misled you. But no, designated survivor (the practice) is pretty much ripe for a narrative, which is why we got Designated Survivor (the TV show), and it's one of the coolest elements of modern-day politics. What, you don't get excited by rules put in place to make sure that democracy continues in the face of adversity? You don't have a backup plan just in case something bad happens? Just me? Okay. Cool.

The designated survivor, or designated successor, a.k.a. Rick Perry, is a person, typically a member of the cabinet, in the presidential line of succession, who basically gets to hang out all by themselves in a distant, secure, and undisclosed location when the President, Vice President, and other officials in the presidential line of succession are all gathered together, typically during State of the Union addresses or presidential inaugurations. Basically, this helps to ensure that the United States government will keep on truckin' in the event that a catastrophic event that kills the President, Vice President, Speaker of the House, everyone, under the rules of the Presidential Succession Act .

Basically, this is the time for anyone with the title of "Secretary of _____" to step up and possibly become Leader of the Free World. If you're the Secretary of Agriculture or of The Interior or whatever President pro tempore of the Senate is, this could possibly be your time to shine, baby! (In the event of a horrible catastrophe, that is. It's hard to know who to root for in this scenario. Is this FOMO, or not?)

The designated survivor still has the same rules that a president has—you must be eligible to succeed to the presidency, i.e., you must be a natural-born citizen over the age of 35 who has lived in the United States for at least 14 years. (Dancing With The Stars isn't on that list, unfortunately.) And basically, the designated survivor gets to play president for a while because they get the same presidential-level security and transport for the duration of the event, including the nuclear football—the briefcase that allows the President to authorize a nuclear attack. If I was the designated survivor, I would ask for all of the secret passwords and probably try to enact a law to make it illegal for people to work on their birthday. Hey, the State of the Union isn't that long, I can't enact that much change!

The one thing you don't get as the designated survivor is any kind of briefing or insight about what to do in the event their successor is killed, so it's basically like, "LOL, have fun figuring out how to be president now!" 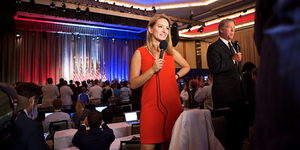 My Crazy Year Trailing Donald Trump
Black-Authored Books You Should Read Immediately
The Women Taking Back Rwanda
Amanda Mitchell Amanda Mitchell is a writer and podcaster with bylines at Marie Claire, OprahMag, Allure, Byrdie, Stylecaster, Bon Appetit, and more.
This content is created and maintained by a third party, and imported onto this page to help users provide their email addresses. You may be able to find more information about this and similar content at piano.io
Advertisement - Continue Reading Below
More From Politics
For Teachers, Going to Work Can Mean Life or Death
Want to Help Moms? Prioritize Menstrual Equity
Advertisement - Continue Reading Below
Abortion Rights Start at the State Level
All of Your Abortion Questions Answered
The Texas Abortion Snitch Site Is Having a Bad Day
The Future of Afghan Women Depends on Us
How You Can Help People in Afghanistan
Andrew Cuomo Has Resigned as NY Governor
Gwen Berry: Athlete, Activist, Olympian
The Anti-Choice Endgame: Power And Control