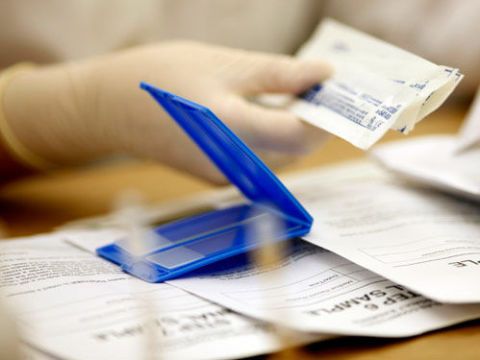 In our September 2010 issue, writer Ralph Blumenthal told the shocking story of Helena Lazaro, whose rape kit wasn't tested until 2009—13 years after her brutal rape in Los Angeles. Lazaro's rape kit was found among the 12,669 untested kits uncovered in the Los Angeles Police Department and Sheriff's Department last year. But what happened to Lazaro is happening to many women. Crime labs across the country are sitting on appalling backlogs. Human Rights Watch recently found that only 20 percent of nearly 8,000 rape kits booked into police storage in Illinois from 1995 to 2009 were ever tested—this after Rod Blagojevich falsely pronounced the state backlog-free in 2005. As far back as 2002, Houston's crime lab had run up a backlog of 19,500 untested rape kits. Detroit has over 10,000 unopened and untested kits in their possession. And police in Denver actually threw out DNA evidence from nearly 6,000 rape and murder cases. And in crime labs that still haven't bothered to count their backlog, the numbers could be far worse. Here, four more women tell the stories of their cases:

"On July 1, 1985, I was abducted, shot, beaten, robbed, and raped repeatedly. Savannah Chatham Metropolitan Police Department reopened my case five years ago, and it was discovered that my case was closed just three weeks after the assault, crime scene film was never developed, and most of the evidence—including my rape kit—is believed to have been destroyed. The only evidence left is my clothing from that night, and I am actively pursuing "touch DNA" testing in the hopes that my assailant may be held accountable for his actions."
—Susan Cash

"My experience was rough as I was 12 years old and the rape kit was the first time I had ever seen a gynecologist. It was very traumatic for me. They scrapped under my nails and took my clothes. I didn't have a victim advocate explaining things to me like many victims have today. I wasn't prepared for any of it. Victim advocates are a great resource in these times, and they help to ease the trauma. I wish I had that during my rape kit exam."
—Jennifer Storm "I had a rape kit done the day after my assault. They found some of the attacker's DNA on my body, but it wasn't used in the court case. He was caught about a week after the assault, but not from the rape kit information. He was ultimately found guilty in federal court without the use of the evidence found in the rape kit. The rape kit was an extremely traumatic experience, and I was never told about the status of my kit until years later when I opened the court records myself and found the results among the paperwork. It was a relief to see that there was physical proof of what happened to me, but I was disappointed that no one had ever told me about the results. I spent years wondering."
—Eliina Nicole Keitelman "The importance of rape kits played a vital role in my case. The day I was raped, the police told me not to get my hopes up. I couldn't give a description, and they had no leads. It is only because forensics processed my rape kit right away that they were able to connect my case to several other rapes in the area. With that evidence, they were able to put away the man who raped me. Steven Morales received the steepest sentencing a rape perpetrator had ever been given: 108 years. Being able to confront the man who raped me helped me move on and showed me the power of my voice. Since then, I have used my story to inspire individuals through speech, research, and a non-profit I started called Create Social Change. There are so many rape kits that don't get tested, and it's important for people to realize that if they do get tested, there is a higher probability that the judicial system can do their job."
—Chimine Arfuso

Jihan Thompson Jihan Thompson is a freelance writer and entrepreneur based in New York.
This content is created and maintained by a third party, and imported onto this page to help users provide their email addresses. You may be able to find more information about this and similar content at piano.io
Advertisement - Continue Reading Below
More From Politics
What Liberation Means This Juneteenth
Kathryn Garcia: It's Time to Step Up or Shut Up
Advertisement - Continue Reading Below
A Valedictorian Speaks Out Against Abortion Bans
Standing Between Care and Violence
Seeking Healing a Century After the Tulsa Massacre
What to Know about Texas's Abortion "Trigger Ban"
A New Book Invites Us to Rethink Menstrual Equity
We Must Remember George Floyd's Legacy
This Is How Much Joe Biden Is Worth
Joe Biden's Granddaughter Is His Biggest Fan