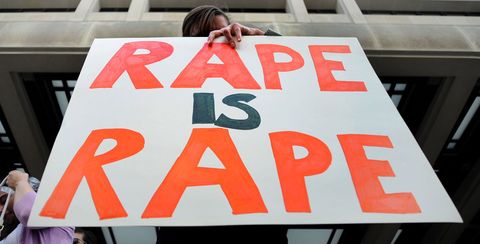 Consider yourself warned: The following is so reprehensible that your morning coffee will inevitably end up splattered all over your computer screen.

Philip Drury, a shadow cabinet leader of East Hampshire District Council in the UK, had the gall recently to suggest that a woman was too unattractive to be raped. *Bangs head against wall*

Drury made the comment about 21-year-old student Serena Bowles, who claims she was raped during a college trip to Florence and has since been accused by Italian police of making the whole thing up. "Not sure anyone would want to even think about it looking at her lol," he wrote under an image of Bowles in a thread discussing the case on Facebook.

Naturally, his nausea-inducing remark was met with outrage—one user depicted him as a "pitiful excuse for a human being." Yeah, sounds about right.

After the comment was made, Drury was even quoted by Solent News Agency justifying his actions without so much as an apology: "I was excessively tired and was working nights," he said. "I had just come back from an excessive Chinese business trip—I was tired. I will remain on the council."

Fortunately, despite a council investigation deciding that no action should be taken against Drury because he was acting in a private capacity, he's announced that he's standing down.

But don't think for a second it's because he's actually owning up to his misogynist idiocy. He's bowing out "due to work pressure," because he's the real victim in all this, right?

Sadly, we'll have to file this as yet another instance of a woman's rape claim being disparaged by an old guy in the public eye. Not to mention a reminder that in 2015, we still have a long way to go.

Is This The Most Condescending Political Ad Ever?

Lauren Valenti Associate Web Editor I’m the associate web editor at Marie Claire.
This content is created and maintained by a third party, and imported onto this page to help users provide their email addresses. You may be able to find more information about this and similar content at piano.io
Advertisement - Continue Reading Below
More From Politics
Kristin Urquiza Wants Justice for COVID-19 Victims
A Breakdown of VP Harris's Net Worth
Advertisement - Continue Reading Below
WH Announces Removal of the Hyde Amendment
What Liberation Means This Juneteenth
Kathryn Garcia: It's Time to Step Up or Shut Up
A Valedictorian Speaks Out Against Abortion Bans
Standing Between Care and Violence
Seeking Healing a Century After the Tulsa Massacre
What to Know about Texas's Abortion "Trigger Ban"
A New Book Invites Us to Rethink Menstrual Equity