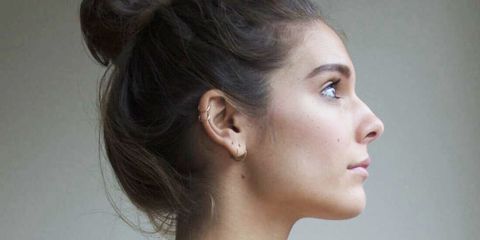 Super, right? But even with such an explicit mission statement, people are totally, frustratingly, expectedly missing the point. Internet randos male and female alike are calling Stasey and the eight other women featured on the site "exhibitionists," "show-offs," and "attention whores," and willfully ignoring the cue to talk about female bodies in a not condescending or accusatory way. And, oh yeah, they're fixated on the nakedness like 12-year-old schoolboys standing in front of a Courbet.

Let's get this straight: Herself is about women presenting themselves as they want to be seen. It's about women baring their bodies as they bare their innermost fears and memories. And yes, it's about pride. All those things together—freedom, self-love, being able to choose for yourself—that's what makes this feminist.

"It comes at a greater cost to you to attack the women around you than it does to empower them," Stasey says in her own Q&A. Hear that, internet?

15 Stunning Images Capture How Beauty Comes In All Different Sizes

A Plus-Size Blogger Asked 21 International Photoshop Experts to "Make Her Beautiful," and These Are the Results

These 26 Photos Show There's No One Way to Be Beautiful

Chelsea Peng I'm Chelsea Peng, the assistant editor at MarieClaire.com.
Advertisement - Continue Reading Below
More From Politics
Everything We Know About Senator Warren's Husband
Mayor Pete's Husband Would Be a "First Gentleman"
Advertisement - Continue Reading Below
How a Parkland Mom Turned Her Grief into Action
He Voted for Trump. She Voted for Bernie.
How Guerrilla Feminists Are Fighting Femicide
Who Was Mayor Pete's Father, Joseph Buttigieg?
Nancy Pelosi, Icon, Ripped Up Trump's SOTU Address
Thoughts From a First-Time Caucus-Goer
And Now, a Word From the Future Voters of Iowa
Ayanna Pressley Wants Total Justice for Survivors