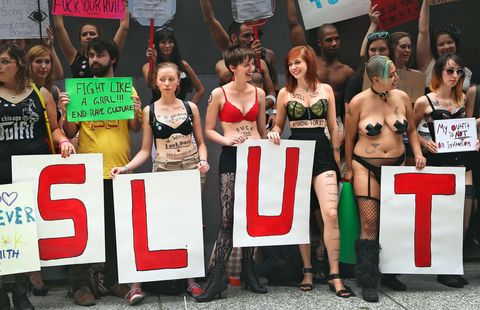 When she was 14, Leora Tanenbaum made out with a boy her best friend liked. When word got around, her classmates spread nasty rumors that pinned her as the school "slut," a reputation that followed her until high school graduation. Then, Tanenbaum grew up, interviewed dozens of girls and women about having been called "sluts," and published their accounts in her seminal 1999 book, Slut! Growing Up Female with a Bad Reputation. Now, she's returned to investigate how the label has evolved in the age of tweets, selfies, and Snapchat, withI Am Not a Slut: Slut-Shaming in the Age of the Internet (Harper Perennial), to be published this month.

Marie Claire: Where did the word "slut" originate, and what is a slut, exactly?

Leora Tanenbaum: The first usage of the term was in The Canterbury Tales in 1386. Geoffrey Chaucer used sluttish to refer to a man who is dressed in dirty clothes. In 1402, the English poet Thomas Hoccleve used slut as a noun in the same way but with regard to a slovenly woman who didn't keep her home clean. Slut continued to be used as a synonym for a woman who's dirty or untidy and who is poor or from the working class. But in 1450, slut also became a synonym for a woman of low or loose character—someone who was sexually forward. Basically, being sloppy in matters of cleanliness became associated with being untidy in sexuality.

MC: What's changed since you started investigating the term?

LT: It's so much worse today. Twenty years ago, every school had one or two girls who were labeled sluts, and everyone focused their slut-bashing energies on them. But now, the slut label ensnares pretty much every young woman. I don't think I've met a female under the age of 25 who hasn't been called a slut, even if in a jokey way.

MC: You define a shift from "slut-bashing" to "slut-shaming." What's the distinction?

LT: I coined the term "slut-bashing" to refer to sexual harassment where a girl is called a slut repeatedly by a person or group to harm her. It's a form of public humiliation and control. We still have that, but it's also evolved into a diffuse, casual phenomenon. It dovetails with the emergence of social media because our bodies are perpetually on display. Women have always been judged by their appearance, but now there's a relentless, omnipresent surveillance accelerating things. Ultimately, the result is the same: the sexual policing of women.

MC: It seems like it's largely a girl-on-girl crime. Why is that?

MC: What happens to a girl deemed a slut?

LT: Life can be intolerable. I spoke with girls who turned to alcohol or drugs, who cut themselves, who are clinically depressed, and of course there are tragic stories of girls committing suicide. It's also a health-care issue. So many girls don't use birth control because their moms said it would make them a "ho," or are lying to health workers about their sexual history, which has a detrimental effect on the care they're accessing.

MC: You found women who are trying to reclaim the label. Can that be a good thing?

LT: A lot of women have come to the belief that presenting themselves as a slut is aspirational: "I own my sexuality, I call myself a slut, and I feel empowered by it." In a closed society, where everyone agrees the definition of slut in this context is lighthearted, or ironic, or even feminist, that can be fine. But in reality, we can't control how others perceive our behavior.

MC: Slut-shaming played out in an international forum when nude photographs of Jennifer Lawrence and other celebrities were hacked and leaked online. What's your takeaway?

LT: Responses to the celebrity nudes revealed the tensions underlying notions of sluttiness. You might think since these women eroticize themselves as part of their jobs, they would not be judged and shamed when naked photos come to light. So the fact that they were called "sluts" signals slut-shaming may not always be about nudity or even sexuality. What galled the slut-shamers was that the photos captured agency—active sexuality rather than just passive nudity—since the celebs posed for the photos. That's what "sluttiness" comes down to in the end: the idea that girls and women should not be assertive and in control.