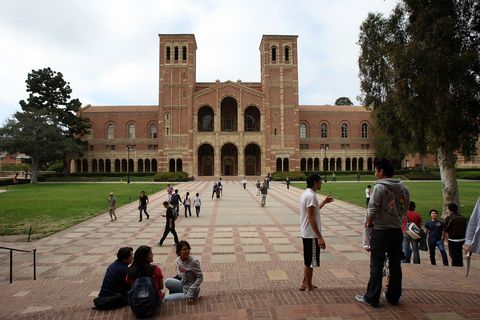 When Sofie Karasek was a freshman at the University of California, Berkeley, she was sexually assaulted by a leader of a student organization at an off-campus retreat. She reported the assault to the administration, but the student was never punished. (She filed complaints against the school under Title IX and the Clery Act, which are still pending; Berkeley is one of 84 U.S. colleges whose handling of sexual assault is under investigation by the Department of Education.)

Karasek, now a 21-year-old senior, doesn't want others to go through what she did, so she mobilized fellow Berkeley survivors (a term more empowering than "victims" that has been adopted by students nationwide) to speak before the California Legislature in support of a controversial law known as Yes Means Yes. They succeeded—Governor Jerry Brown signed the bill on September 28—and are now setting their sights on other states.

Marie Claire: Can you explain what exactly the Yes Means Yes law does?
Sofie Karasek: The law requires that universities determine whether both people gave "affirmative, conscious, and voluntary agreement" when they're investigating sexual assault. So that means if a survivor goes to the university and says, for example, "I was sexually assaulted. I was too drunk to say no, but I never said yes. I was taken advantage of," universities in California are now supposed to say, "Okay, that means the person who assaulted you should be found responsible." [Punishments range from probation to expulsion.]

MC: How would this have helped in your case?
SK: One of the reasons I think this law is important is that it gives a voice to survivors who couldn't speak out at the time of the assault because they were drugged or incapacitated or afraid. I didn't say anything when I was being assaulted, because I was scared. I didn't say no, but I did indicate it. I pushed him off me. It's really important to be able to hold the perpetrator responsible: They violate consent, even though the survivor doesn't verbally say no.

MC: The goal is to shift the conversation away from focusing on the victim, asking things like, "Did you say no? How loudly did you say no?" Right?
SK: I'm not trying to burden either party, but right now, the cards are so heavily stacked against survivors, and something needs to be done to level the playing field, to make these investigations as impartial, prompt, and fair as they're supposed to be. I'd like to see perpetrators asked, "Did she ever say yes? Did you ask if she wanted to have sex with you? Did she say it was OK? Did she indicate it in another way?"

MC: What did you make of the backlash?
SK: I've heard people say, "Oh, my God, this is going to criminalize all sexual activity." That's just absurd. Sexual assault is a huge problem, and we're trying to address the culture of sexual violence that allows it to permeate. Part of this is that there's such a lack of respect for the wishes of your partner. Look, if you're having consensual sex, this law isn't going to affect you. But if you don't know if you're having consensual sex, you should ask.

The Fight Against Sexual Violence on College Campuses: End Rape on Campus

The Fight Against Sexual Violence on College Campuses: One Student

Kayla Webley Adler Deputy Editor Kayla Webley Adler is the Deputy Editor of ELLE magazine.
This content is created and maintained by a third party, and imported onto this page to help users provide their email addresses. You may be able to find more information about this and similar content at piano.io
Advertisement - Continue Reading Below
More From Politics
What Liberation Means This Juneteenth
Kathryn Garcia: It's Time to Step Up or Shut Up
Advertisement - Continue Reading Below
A Valedictorian Speaks Out Against Abortion Bans
Standing Between Care and Violence
Seeking Healing a Century After the Tulsa Massacre
What to Know about Texas's Abortion "Trigger Ban"
A New Book Invites Us to Rethink Menstrual Equity
We Must Remember George Floyd's Legacy
This Is How Much Joe Biden Is Worth
Joe Biden's Granddaughter Is His Biggest Fan