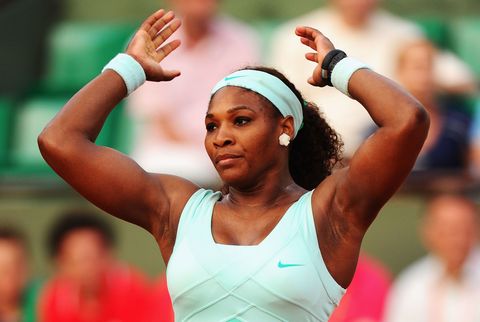 Sometimes it feels like the buzz about gender equality is more of a deafening roar—phrases like "pay gap" barely even raise an eyebrow in a culture saturated with headlines about women's empowerment. But (you knew there was a "but" here) that doesn't mean all this talk is actually affecting change.

According to the World Economic Forum's newly released Global Gender Gap Report, the U.S. ranks 28th for gender equality, tumbling eight spots from last year, when it was 20. This marks America's lowest position on the index since 2009, when it was 31. The list ranks countries based on equality between men and women in four areas: economics (including salary), education, politics, and health.

America's year-over-year decline is mainly due, it will likely surprise no one to know, to politics, where we now have fewer women in positions of power. But it also lost ground in the economics category, falling to the sixth position from number four last year.

Even still, women have made strides in income inequality over the last 40 years. In 1979, for instance, women in America earned about 62% as much as men, according to the Department of Labor. In 2010, women made about 81% as men. Their participation in the labor force has also climbed since the '70s, although it actually declined in 2010 compared with 2000, when the number of women in the workforce peaked.

America's year-over-year decline is mainly due, it will likely surprise no one to know, to politics, where we now have fewer women in positions of power.

In recent months, a number of big names in Hollywood have issued sharp remarks about the pay gap. In an essay for Lenny Letter, Jennifer Lawrence candidly discussed earning less than her male counterparts in American Hustle. "When the Sony hack happened and I found out how much less I was being paid than the lucky people with dicks, I didn't get mad at Sony. I got mad at myself," she wrote. "I failed as a negotiator because I gave up early."

Helen Mirren has had equally pointed words. "We've got to stop being polite," she told The Hollywood Reporter. "If I ever had children, which I don't, the first thing I'd teach a girl of mine is the words 'fuck off.'"

Hollywood certainly isn't the only place in America where there's a glaring pay gap—but, thanks to its stars, it's getting the most attention. Women are still massively underrepresented in a range of professions, from tech to construction, according to the International Labor Organization. They also have less of a presence in the boardroom. Even top female athletes make less than their male counterparts. Serena Williams is arguably one of the greatest athletes in the world, regardless of gender, yet she ranks 47th on the Forbes' list of top athletes.

It's worth noting that the U.S. did see slight improvement, according to the Global Gender Gap report, when it came to education, where the gap between men and women is nearly nonexistent. But its ranking in this categories declined mainly due to greater progress in other nations.

At this rate, men and women won't be on equal footing economically until 2133—118 years from now.

To learn more, explore this interactive index from the World Economic Forum:

Michael Sebastian Michael Sebastian was named editor-in-chief of Esquire in June 2019 where he oversees print and digital content, strategy and operations.
This content is created and maintained by a third party, and imported onto this page to help users provide their email addresses. You may be able to find more information about this and similar content at piano.io
Advertisement - Continue Reading Below
More From Politics
What Liberation Means This Juneteenth
Kathryn Garcia: It's Time to Step Up or Shut Up
Advertisement - Continue Reading Below
A Valedictorian Speaks Out Against Abortion Bans
Standing Between Care and Violence
Seeking Healing a Century After the Tulsa Massacre
What to Know about Texas's Abortion "Trigger Ban"
A New Book Invites Us to Rethink Menstrual Equity
We Must Remember George Floyd's Legacy
This Is How Much Joe Biden Is Worth
Joe Biden's Granddaughter Is His Biggest Fan