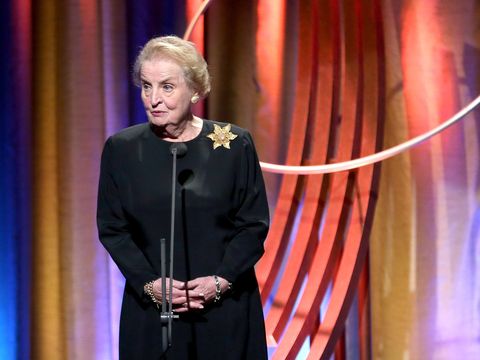 Where is the humanity? Right now, a disappointingly large number of political figures are arguing that America should close its borders to Syrian refugees. An outpouring of politicians and celebrities (including President Obama) have voiced concern that this attitude is the very antithesis of that which America was founded on, but none have done so better than Madeleine Albright.

In a essay for TIME, the former U.S. Secretary of State speaks candidly about the refugee crisis, and why it's so important to remember "our country's proud tradition of admitting refugees from every corner of the globe and every faith background." Most notably, she reminds us that she herself entered the USA as a refugee.

"This issue is personal to me, because it was 67 years ago last week that my family and I arrived in the U.S. to begin a new life in exile from our native Czechoslovakia," Albright writes. "I will always feel an immense gratitude to this country, one shared by the millions of other refugees who have come to our shores in the years since."

Albright goes on to say that the Syrian people are in the same position as she once was, and closes the essay with a reminder that terrorist rhetoric cannot make us forget America's most basic and fundamental principles.

"Our enemies have a plan. They want to divide the world between Muslims and non-Muslims, and between the defenders and attackers of Islam," she concludes. "By making Syrian refugees the enemy, we are playing into their hands. Instead, we need to clarify that the real choice is between those who think it is OK to murder innocent people and those who think it is wrong. By showing that we value every human life, we can make clear to the world where we stand."

Mehera Bonner Contributor Mehera Bonner is a news writer who focuses on celebrities and royals—follow her on Instagram.
This content is created and maintained by a third party, and imported onto this page to help users provide their email addresses. You may be able to find more information about this and similar content at piano.io
Advertisement - Continue Reading Below
More From Politics
What Is Mutual Aid? For One, Not a Trend
How to Help Texans During the Winter Storm Crisis
Advertisement - Continue Reading Below
Hate Crimes Against Asian Americans Are Rising
Anti-Trans Bills Are in the Works Across the U.S.
Vanishing Act
The Women Who Took on ISIS—and Won
Yes, Trans People Belong in Sports
I’m a Parkland Survivor. Rep Greene Must Resign
Why Indian Farmers Have Been Protesting for Months
AOC Opens Up About Her Trauma